My buddy Jack Roberts and I were chatting while having a nice warm cup of coffee Chamonix.  I mentioned something about Colin Haley and his times frames climbing a le Droites-le Courtes combo.  Jack mentioned something about Colin being fast in the mtns (El Cap and Hal Dome in a day or the Cassin in a day seemed to register) and according to Jack those weren't "normal" (more likely he meant not normal for old guys)  time frames.

One definition of fast and light:   Colin Haley simu soloing at this point and about to start simu climbing. 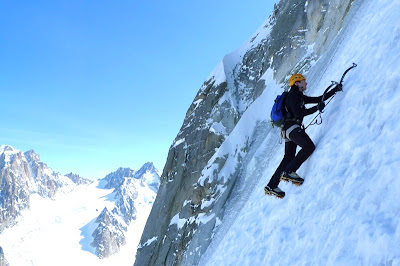 Jack aint exactly normal himself (just look at his feet and is past resume in the mtns and you'll understand that statement) so comments like that stand out in a conversation.

Here is my thought on it.  To go fast you have to go light.  To stay warm you have to keep moving.  If the climbing is too hard for your skill set or too slow because of your comfort level the idea of fast and light hits the ZERO fun button pretty quickly.

To climb fast and light both climbers obviously have to climb quickly.  In the mtns, rock, ice and mixed...the second needs to be half the time of the leader.  That takes some effort generally and you have to want it.  Better yet simu clim or simu solo. Which is why I pay so much attention to my umbilicals.

To climb fast you can't over dress, but neither can you afford to get really chilled.  Add too many clothes and you can't climb in them or over heat instantly when you do start climbing.

And I have allowed it.

Pushing the conditions (climbing in lots of new snow) made several of our recent climbs really slow.  Really slow.  Seldom have I been so uncomfortable in the mountains, slow.  To stay warm at the belays in the shade at 12K feet in -20 temps took some effort.  It only takes one of those trips to encourage you to take enough clothes the next time.  Having your core get chilled and shivering on belays and then not being able to generate enough heat to warm up on lead or while following can be mentally and physically disabling.

For an old fat guy I pride myself on the speed at which I can climb technical ground and the lwt weight clothing systems I choose to do so in.  But to climb fast and dress light I have to be able to closely monitor and control my body core temperature.  Which means I have to be able to climb quickly and spend little time on the belays.

Terrain, conditions and the team's skills will define the speed at which you climb.  The idea is to hit the perfect balance between those three and your gear selection.

Here is a good comparison:

I am wearing a Atom SV plus an  Atom Lt and likely two lwt hoodies under that combo, with NWA salopettes and two pair of longs under them.  It took that to stay warm at the belays.  The SV would come off mid pitch if we belayed and was in the pack when we climbed together.  Even with just an Atom LT on as an outer garment climbing together I was too warm.  But if I had stopped for any length of time I would have chilled my core.

Better answer?  We should have simu climbed the entire route together (which would have required a stronger and/or more skilled team)  and I should have had a lighter outer shell available (my poor gear choice). 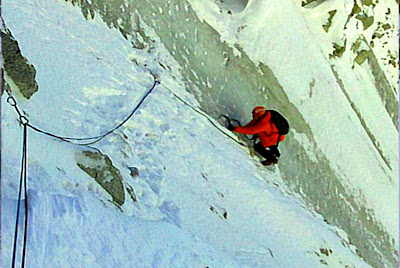 For this one  I am using a Gortex hybrid shell jacket, a lwt Merino wool sweater and a pair of Gamma LT pants with no longs.   If I had stopped or had to belay....no question I would have chilled my core in a very short amount of time.  Better answer?  One pair of longs would have made this a much more comfortable (mentally) combination.  Physically, for this climb, this day it was a perfect combo for soloing.  But it was also very obvious to me I didn't want to stop for long either. 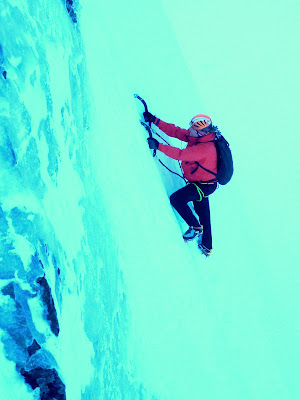 I'm still learning.  And the best lessons are still painful.  But every lesson makes the game easier in the long run.
Posted by Dane at 9:41 AM

I've found heavier weight layers, with big vents, and paying lots of attention to the vents very effective.
for example, with a standard(ish) three layer system up top, and longs and softshell pants on your legs, (all fairly heavyweight warmthwise)

with every zip and vent done up you can sit out some pretty chilly times, and with everything possible open, you can chill right down for the climb.

vents are the future.

Thanks for the input Steeve.

I might suggest a system that depends on vents is out of date and already obsolete. Your clothing must breath but also be wind proof and durable. Extra vents and zippers are just poor design and material use imo.

Easy to say the same about a "standard three layer system". Haven't use one in years ;-)

But would love to hear the details of a system you think will work in similar winter conditions while technical climbing.

Good post Dane. I find many climbers who follow the fast and light ethos do neither. The three guys who died on tne NF of Hood come to mind. They not light and fast enough to avoid the storm and they did not carry enough to ride it out. Like Mr. Miagi said, "stay in the middle of the road and you get squished".

Daniel, that is a classic. " Mr. Miagi say, "stay in the middle of the road and you get squished".

its worth noting my system is for scotland, so probably not similar winter conditions.
what I normally go for:
patagonia capilene 3 high neck
MH rannoch fleece sweater
ME changabang

thats what Id normally go for for moving fairly fast.
when you're going quick. I really like to have the wind cut rightthrough all my layers, nothing will cool you down, and allow vapour to escape better than any fabric (and you can see the fabrics in my system are already pretty breathable)

but then if you stop or slow down, zip up again and you're in your own little fortress of complete windproofness.

its also worth noting that I am a particualrly sweaty person...
I agree that it shouldnt depend on vents, but actual unimpeded fresh airflow around your body carries vapour and cools far quicker than a breathable fabric can alone.

its one of a number of system options I use, but I am a fan of the pit zips.

Thanks for taking the time to post that Steeve.

Always good to hear what others are using and where. I'd suspect your Scotish conditions are not alot different than here in the NW. We just never go out when it is "full" here :-)

I think your 3 layer combo is pretty much the norm here as well, Cap, pile and a shell. And you are right that system needs extra vents.

We (a group of us) have dropped the shell and pile combo and been using newer synthetics with a shell built in, the Arcteryx Atom Lt is the best example but lots of folks using the Nano Puff as well in a similar fashion. So two layers instead of three.

Belay parka mandatory when you stop (our third layer) with that combo and puff pants if things get bad enough.

So not as warm over all as what you are using but it breathes much better over all and is a good deal lighter as well.

One idea to keep legs warm while keeping the cool: 3/4 length long johns.

I've got a pair that stop just below the knee: they keep me warm enough while belaying yet the gap between longs and socks is enough to keep my legs cool while moving.

Pretty much agreed on the rest of the layering system, though I've yet to try the Atom / Nano layer.

Hi Dane,
I've been reading for a while. You have some great trial and error honesty in there. Thanks for sharing.

I'm a young (30yo) Canadian Rockies climber. Been at it for a while but always learning.

I cool down really fast and sweat alot. I still use a variant of the 3 layers idea after my own trials and errors. Gut feel, weather, route and partner choice were all weighted issues. With my regular partners we'd call it our T&E days (trial and error).

Mid = This layer is the key. Long sleeve, high and deep zip neck. Weight will vary on the climbing plans. Synthetic or merino. . Get the right one for the trip and it's all good!

Outer = Hooded softshell 100%. I do like the Gamma MX. A light Gore-tex tucked away. It should fit over all layers if needed. It's often left behind.

Belay parka is synthetic but down is nice if it's cold, dry and easier climbing. With a hood. It goes on first thing when I stop.

A balaclava is always near by.

Lower body is similar. Next to skin it's merino again. As a mid, long light merino or RHO leggins or both. Outer, unlined softshell. Conduit rain pants sometimes come. Sometimes synthetic insulated pants as a light back up.

On single day outings, I like Black Diamond knee pads, allowing me to leave a layer behind. Started using them after a surgery and have been spoiled since.

I keep things a la Mark Twight. An action suit and a stopping suit.

If I'm stopping, once secure on the anchor, my only priority is add the parka, switch gloves, zip-up all zippers and hoods-up.

Thanks again for sharing and great pictures!