I had a chance to climb on some ice this winter that was unique.  Was to me anyway.

I had thought I had seen hard black ice previous.  Uncomfortable but workable.  But some of the stuff we got on in Chamonix was damn near bullet proof.   And I actually know what real "bullet proof " is by USDOJ standards.  This was IIIA no problem.  Ceramic plate hard.   Going for a solid III or IV rating hard.   Hard, cold and dry.  Some times as much rock and sand, as ice.

I had thought over time I pretty much figured out how to get a decent belay on ice quickly.   Typically takes only a few minutes and I'm done.  Nothing fancy mind you.  Two screws, two tools to the hilt.  Clove the screws on a good day, clip a tool out of the loop may be and were are off to the races.  Nothing fancy.  I can do fancy just don't chose to generally.

Only once have I failed to get an anchor...that in the upper bowl on Slipstream.  Even in the old days when we already knew the screws we were using wouldn't work in some ice we'd just keep climbing in a similar situation.  Never have I spent an hour trying to get a belay on ice...until this winter. 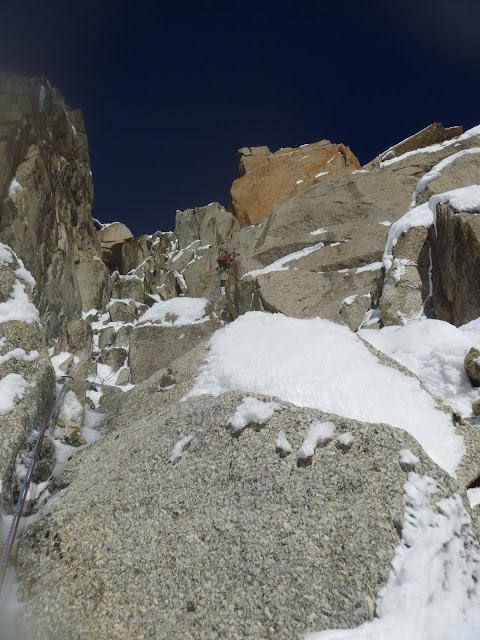 Matt  (high middle of pic) above tied off screws and  well deserved rock pro....finally.
Likely obvious but alpine ice isn't waterfall ice.  I spent an hr we could ill afford trying to get two decent screws into the belay from where this picture is taken.  You might reasonably ask why not rock gear there?  And it would be a reasonable question.  We had just climbed 250m of hard, (like rocks are hard) north facing ice with a foot or so of fresh snow on it and my patience was wearing thin.   I actually climbed over to the rock thinking I'd be able to get something in where the picture is, easily. ( I seldom can't in a minute or less on rock)   It was prefect granite for chrimney's sake!   By the time I realised rock gear wasn't going to be easy I was determined to grovel, dig or full on excavate to get ice..any ice.
What ice that I could/should have gotten a screw into normally I was coming up dry.  I'd get a bite, a couple of 1/4 turns to a start.  Then the ice turned to the consistency of rice and the screw failed to bite as the tip, plugged up with ice.  Over and over again.  Clean the tip and try, clean the tip and try.  Nothing in the tube.
Six holes.....yes I counted.  And many failed ice screw placements later I gave up (i gave up!?) ...tied the two shitty screws off , covered them with snow, reset my tools, tied them off and said "climb".  Surely not not all that thrilled with the screws or the time wasted.  We should have just started climbing together so I would/could have found better ice.  Bad, really bad, judgement call on my part in several ways.
I had covered the anchors because I knew my partner was not going to be pleased.  With the gear or with me.   Hell! I wasn't pleased and at this point was feeling like a total failure.  WTF happened here?  A couple of things.

The ice was really old and hard.  It was shallow.  I dinged 3 screws trying, I know.   But and here it comes....the screws were all new (as in brand new) BD Express screws.  I had decided to make a real effort to use the BDs in the alpine on this trip.  Lighter by a few grams, rack easier and all.......
Even if the BD's are a bit harder to place, which has been my experience over time,  it is only alpine ice.  How hard can it be?  "It aint going to ever matter."

Ya, that was a dumb answer.  And this was a "easy" climb.  Just the fact that the ice wasn't being cooperative made it, well, not so easy.

A number of things stood out to me on this particular climb.  New snow on the approach and the easy angled ice, the cold temps and the ice quality.  It was hard to get takers for a trip  back to that set of gullies ;)

What I did fine when I made it back the next week was...similar snow conditions.  And the same ice conditions.  Likely a tiny bit warmer but that would be only a guess and if so not by much.

But I brought a majority of Grivel Helix screws this time.  Fool me twice and all.  Amazingly enough...every screw was sunk to the hilt first try.  Nothing tied off and no time wasted on bad anchors.

To be fair.   I knew where I was going, where there was good/better ice on route and where to avoid another dry hole.   But still......if I didn't think there was a difference...a big difference..I wouldn't be writing about it.    With a little help my partner was able to climb "the obvious line" that wasn't all that obvious first time around or for the locals that were following us that day.

I have a full rack of the newest BD and Grivel screws and no horse in the race..   YMMV but that is my 2 cents from this experience. 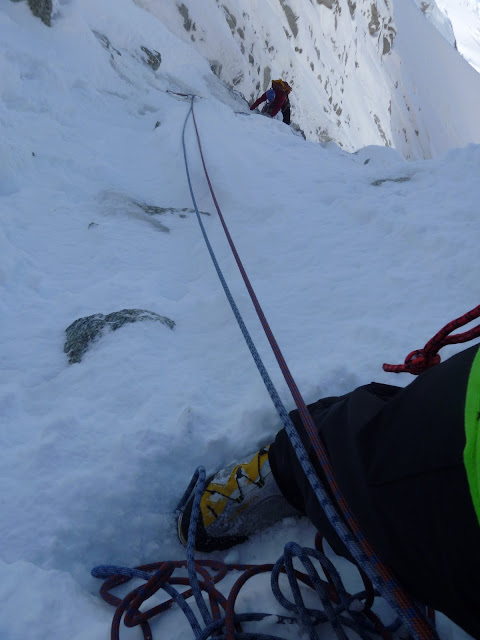 Looking down from that same belay....great snow ledge anyway :)
Sadly, no, the beautiful and warm sunshine  never touched the belay.
Posted by Dane at 11:24 AM

Labels: ice screws, ice techniques, what works for me