A few books I use as reference material for my own climbing skills and techniques.  Twight's, "EXTREME ALPINISM", and Gadd's. "ICE & MIXED CLIMBING"

You can add Mike Layton's new book to that list as well. 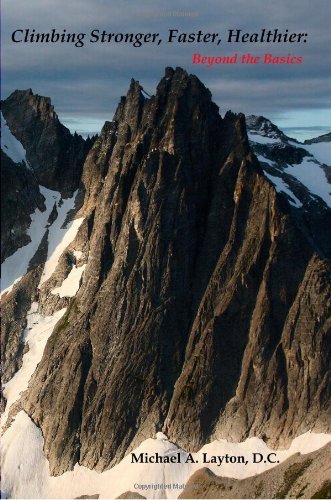 Obviously I am a gear guy.  I like playing with the toys.  And dressing up to go play in the snow.  That is about as far as it goes for me these days.  I like playing and I work hard in a office to get the time to do so.  Often at the expense of being in better shape.  My idea of training for climbing is the specificity of training.  I climb to be able to climb.  I ski to be able to ski.   Old school that and unless  you have a life style where you can climb or ski every day...honestly not very effective.  I am aware of that.  But I am not comfortable with that.

Mark Twight is Mr. Gym Jones these days.  No one more out there than Mark.  Always worth a look

Cross Fit is a good base.  Also worth looking at.

If imitation is flattery we have the locals,  Gravity Jane:

My thought is three fold.  Burn it and you can eat what you want if it is in the right amounts and still stay healthy.  Recovery is underrated for anyone that generally over trains like most obsessions/compulsive climber types. And it is always better to train in the rain than indoors.

But I have no doubt that any one of the previous 3 gym programs can do a better job than I can if you are into it.

I also think the more that you know about fitness, training, nutrition and your own health the stronger you will be mentally and physically in the mountains, on rock, ice or your bike for that matter.  Endurance sports like bike racing and triathalons can teach you much of what your body needs to know to go long in the mountains.

Back to Mike's book.  I was at a presentation given by Colin Haley locally last winter.  After the presentation (which was great btw) small groups of climbers formed up and the discussion started on gear, climbers, routes and general climber bs.  One of the conversations I over heard went something like this, "Twight and Gadd are good but this guy in SLC has it dialed..better book, easier read and way more informative".  I though to myself.wow,  pretty stellar recommendation what book is this?

Mike is a regular on CC.com so I knew his name.  He also offered early support for "Pay It Forward", which is  a charity cause for young climbers that I help out with.  So we had talked a time or two and met in person in SLC for a moment between appointments.

And I had read Mike's book as well.  So had friends of mine, Wayne Wallace, Mark Westman and Jim Nelson.  As had Fred Becky.  All to rave reviews.

Mike has tried to cover an immense amount of terrain in this book.  And it is not a gear book, thank goodness.  Unless of course you think about your body as the ultimate piece of gear...which it obviously is.
And that Mike obviously that dialed and better yet he has it squared away for the reader.

If I have any criticism it is the last chapter in his book on gear.  There are better sources for gear (not that this is a bad one)  and like all of them it will be dated quickly.  The flip side to that is the previous 4 chapters don't have an equal all in one text and will become dated at a much slower pace.  Mike is already planning a improved 2nd edition (see.. obsessions/compulsive climber type).  I'd like to see him expand the first 4 chapters and drop the gear all together.   Becasue he obviously has more to say in the 2nd Edition that will benefit us all.

If you want to get better and stronger  as a climber...just as Twight and Gadd have definitive texts on the subject,  Layton's new book will easily sit right along side them and become a long term references for the smart climber.

can be purchased here:

Also reviewed and available on Amazon.com and here:

http://www.buzzillions.com/reviews/michael-a-layton-climb-stronger-faster-healthier-beyond-basics-first-reviews
Posted by Dane at 12:29 AM

ya, Muffin head :-) Like anyone in N Idaho has any fashion sense Jason? Look around for chrimney sakes! How come you aren't out climbing?

Your right N ID not to known for fashion sense.Should be out bouldering rain ugh! Wettest March on record and April is following suit.