A bit of steep skiing..Spring in Chamonix!

Huntington, Denali and the "Bond" 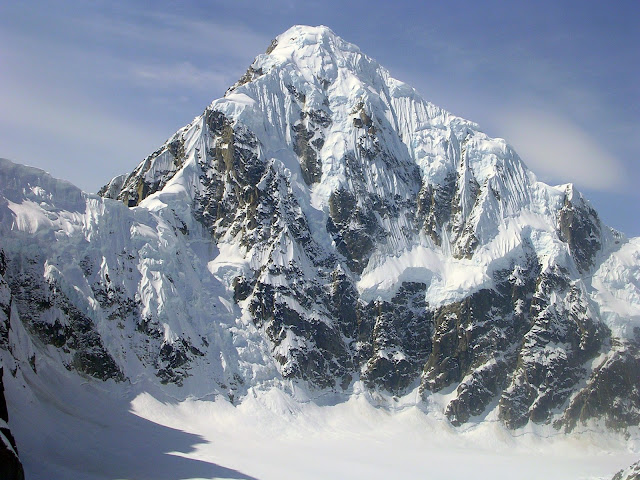 "Simon McCartney was a cocky young British alpinist climbing many of the hardest routes in the Alps during the late seventies, but it was a chance meeting in Chamonix in 1977 with Californian ‘Stonemaster’ Jack Roberts that would dramatically change both their lives – and almost end Simon’s.

Inspired by a Bradford Washburn photograph published in Mountain magazine, their first objective was the 5,500-foot north face of Mount Huntington, one of the most dangerous walls in the Alaska Range. The result was a route so hard and serious that for decades nobody believed they had climbed it – it is still unrepeated to this day. Then, raising the bar even higher, they made the first ascent of the south-west face of Denali, a climb that would prove almost fatal for Simon, and one which would break the bond between him and climbing, separating the two young climbers for over three decades. But the bond between Simon and Jack couldn’t remain dormant forever. A lifetime later, a chance reconnection with Jack gave Simon the chance to bury the ghosts of what happened high on Denali, when he had faced almost certain death.

The Bond is Simon McCartney’s story of these legendary climbs."

and there is more to the story :)

Mark Twight puts Huntington's "Timeless Face" into context and closes one chapter to hopefully only open another on Huntington.

"In the early-80s I discovered Mountain Magazine and the north face of Mount Huntington. I thought the protagonists to be the baddest of the bad-asses. This was about the time the WPODs (Newsom was a part of the WPOD) were active in AK. Those guys scared the shit out of me and I put Roberts in the same category. For a long time I took the ascent at face value and inspiration from it because my own experience taught what may be  one when extraordinary conditions and will prevail. But some of Jack's actions off the mountain made the rumors of doubt easier to believe and I did. Reading Newsom's words was a relief because they meant a climb that inspired me for many years was real, and likely the single ballsiest undertaking in the history of North American climbing."


Brave New Wild from Oakley Anderson-Moore on Vimeo.
Posted by Dane at 5:55 PM No comments:

How far in fruit boots?


IIRC it was the winter of  2006-7 (?), that I remember John Freeman telling me he had soloed Polar Circus wearing fruit boots and using Nomics.   Nomic's were may be a year old at the time. Common now anywhere there is ice,  but at the  time Nomic's alone were pretty radical ice tools.   Fruit boots?  Sweet but usually pretty dang cold.  Warm day on Polar Circus?  It all seemed to make  "some sense".  When John was telling me the story it had been a while since I had been on steep ice and either way I was impressed with the choice of gear and the climb.

I like the films linked below and Ueli's choice in gear.  Which likely has some to do with his head as well.....but not much :)

Now we see Nomics on anything from Alpine ice to steep water ice or really hard M climbing.  Fruit boots?  Some of the best mountain boots are now better/lighter/warmer than most of the original fruit boots.  Telling for me that the Nomic is still "state of the art".

If that doesn't get you stoked try this......
Some nice visuals!

This time of year this is too funnny!