"My big day is always tomorrow"

"Second, anyone who tells you that gear doesn’t matter is clueless (at least in alpine climbing). I’m 100% certain that Rob and I were carrying less total mass of material than any other roped ascent of the route. My ice axes, crampons and helmet are all significantly lighter than they were just three years ago, and massively lighter than the ice axes, crampons and helmets that Steve and Rolo had in 2001. My helmet is the lightest one on the market. My ice axes are Petzl prototypes which are noticeably lighter than Quarks, which are already some of the lightest technical ice axes on the market. My crampons are steel in front and aluminum in back, and connected by dyneema cord. We cut the leg loops off of our harnesses. Our cams were the new BD ultralights. Our ice screws were the aluminum Petzl Laser Speed Lights. Our carabiners and slings were certainly way lighter than the lightest ones available in 2001. We climbed on a single 7.7mm rope, and didn’t bring a second one. I wore single boots on both ascents – the La Sportiva Batura, of which the current version is significantly lighter than the first version that came out in 2007. Yeah, we brought sleeping bags, they weighed 700g each. Yeah, we brought foam pads, but have you seen how light the NeoAir pads are? We had a Jetboil Sol, which is much lighter than the original Jetboil, which already was much lighter than whatever stove Steve and Rolo had in 2001 (probably a white gas stove)."

DRU mixed with a Petzl ad

So what version of the Ueli Steck lwt axe will we see at OR this winter?

I'm betting on the Sum-Tec/Nomic combo versions in the picture just below that he has been using for a while now.  But you never know....he has so many as the 2nd picture shows.

Lots of shots on video here of what I'd guess we'll see at OR.

More here from a previous comment.. in 2013.  Be fun to see what Petzl decided they could produce. 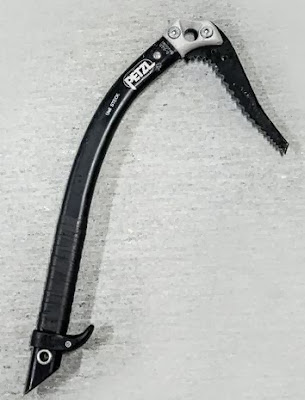 YEA!  They did it!   Took awhile but Petzl showed both a lwt skimo axe and a new lwt "Nomic" as the revamped "Sum'tec" @ OR in SCL 2017.   Makes sense because the new Sum'tec  was so easy to make up with parts they already had on hand at Petzl. 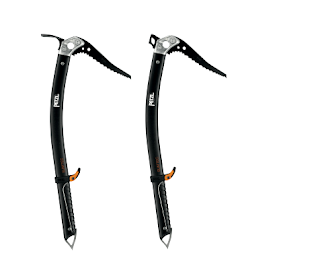