Everyone draws a line some where.... 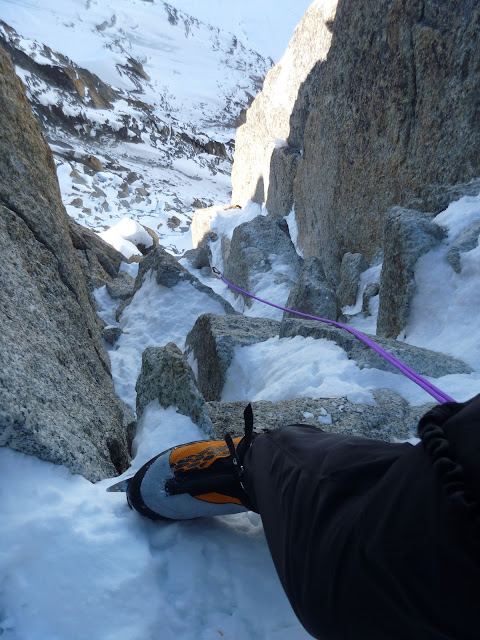 If you haven' read this and the research behind it you should.

I draw a line at cold feet and heavy boots.  Admittedly that is going to be a balancing act generally.

While I was in the Alps a friend who was on the way to Chamonix asked me, "should we bring doubles?"

At that point in my own trip I had been handed my ass time wise and by the cold on two separate climbs that by guide book and my "sitting at my desk standards" should have been easy...to the point of casual.  They weren't and I was cold.  Luckily for me I never had cold feet.  But then I didn't have to spend the night out either as clearly I would have if  I had been required to do so.  One climb was in dbl boots, Spantiks in fact.  The other was in Scarpa Ultras. 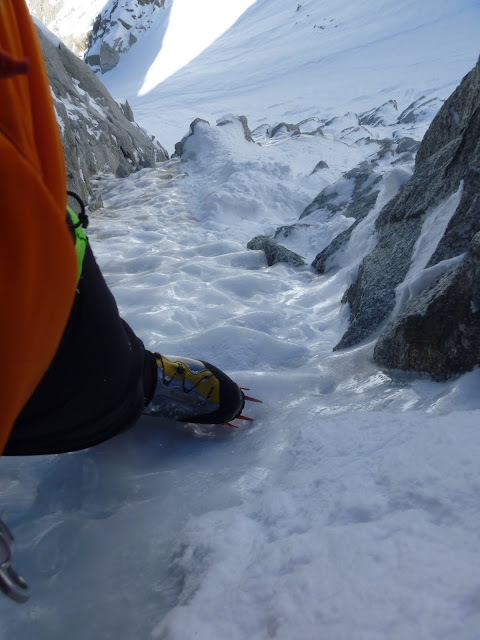 So of course I suggested they bring dbl. boots.  And of course they didn't.  It worked out fine as the weather warmed up in the couple of weeks it took for them to show up in the valley and get on something big.
When they did climb, they climbed fast which helps :)

Snell's had several dozen pairs of the Scarpa Guide in stock but only 3 pair of the Ultras available.  No Ultras in my size or I would have bought a second pair as they aren't available in NA and easily replaced.

I've already reviewed the Ultra.  This is a revisit to that topic. 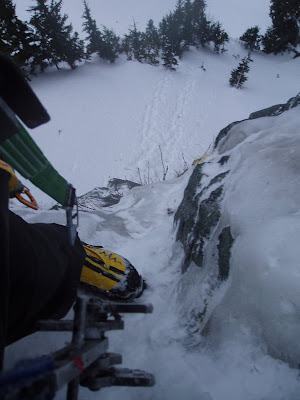 I've been trying to high light the gear I used and really liked in Chamonix this winter on the blog and will continue to do so as time allows.  I took 3 pairs of "big boots" on this trip.  The Ultra the lightest of the three.  It fits my feet very well and most importantly it dries easily.  They dry faster than either my new Baturas or my Scarpa Guides. Part of that is the insulation and inner boot body and part of it is the OurDry liner I suspect.  Now both the Guide and the Ultra are using OutDry.  My early Guides are Goretex.  Not sure what is in the Batura. But the Batura is warmer than either Scarpa single boot. 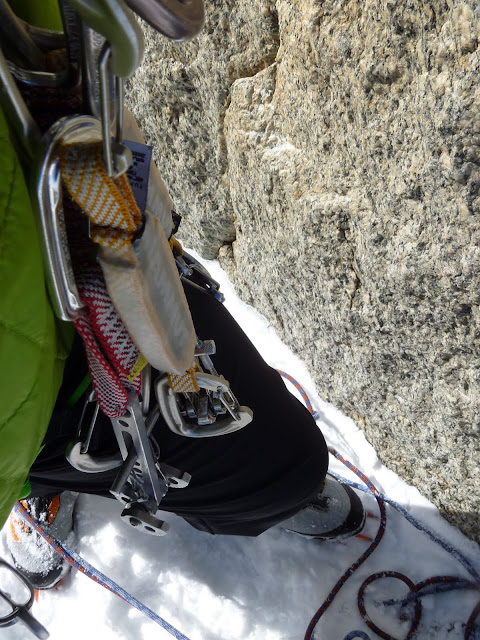 I had intended to climb in only the BD Sabertooth crampons with these boots as they offer the best fit with the addition of Petzl bales.  But it bacame obvious pretty quickly that I had chosen the wrong crampon for the hard ice conditions we experienced early on.  (more on that choice of horizontal or vertical front points in a later blog)  Not a big deal normally but the Ultra (and its stable mate the 6000) are not the easiest boot to  fit a crampon to.  Here is why.  The sole profile on the toe of the Ultra boot.  By far the most narrow toes on a technical boot from  the Industry to date. 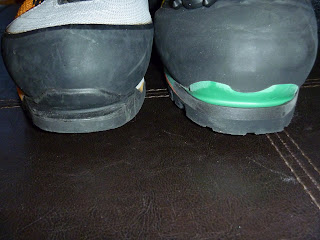 Ultra and a new Batura side by side here.
I find the Petzl crampons or at least crampons with Petzl front bails seen to fit the Ultra the best.  So I started using a pair of Dartwins in the rock hard ice gullies.  The fit isn't perfect but it works well enough and you aren't likely to loose a crampon as a buddy of mine did in Spantiks and Sabertooth crampons in the middle of a a tight mixed chimney.  Annoying that, at best. 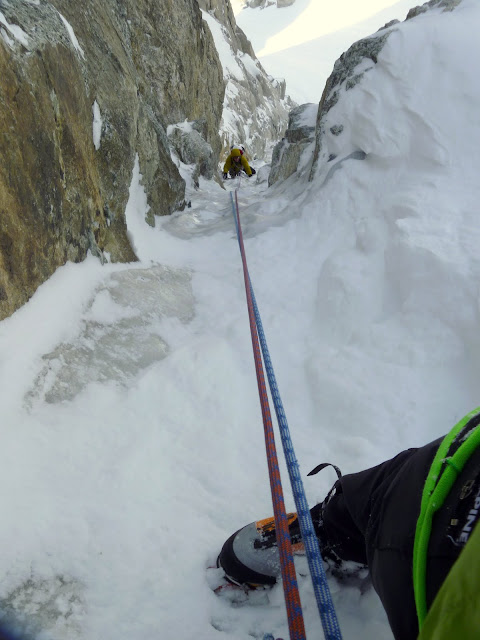 No real point to this blog other than to say how much I like and used the Ultra this winter.   November through April it has been my go to boot.  It fits me well and climbs good enough.  Not the support of a Nepal Evo or Spantik but they are lighter than either by a fair bit and warm enough.  More support and warmer than the Trango Extreme.  And I consider all of the boots mentioned some  of the very best available for alpine ice climbing. 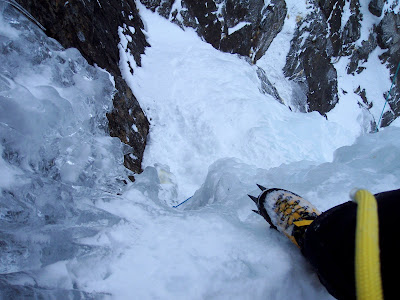 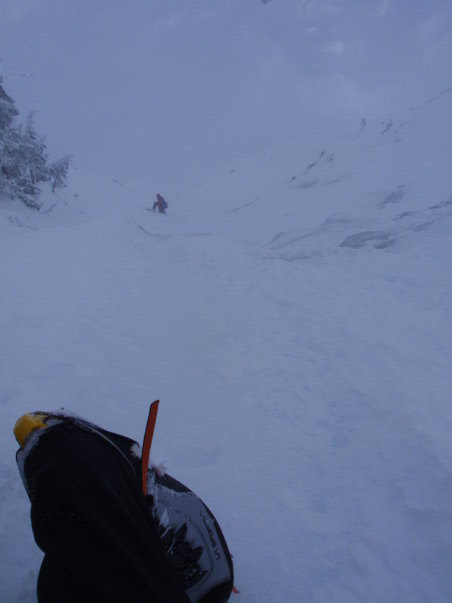 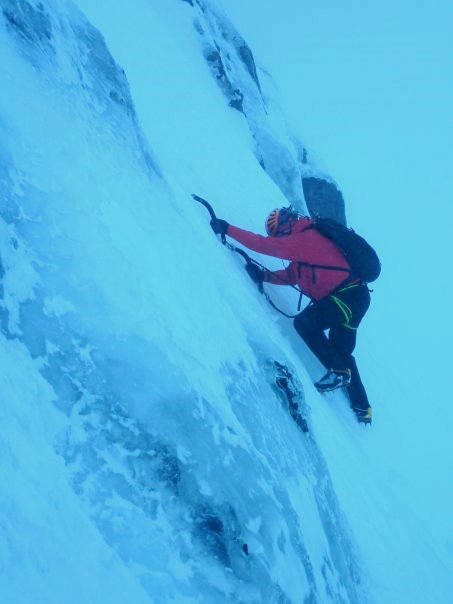 All the boots I mentioned are obviously excellent boots.  No surprise of  the boots I climb in and have pictured above that I would like one pair better than the rest.  They all climb well so it eventually comes down to fit.  The Ultras fit me the best..even better by a fair margin than the Scarpa Guides.
Down side of the Scarpas?  They aren't very durable to date.  Which is why I would have bought a second pair in Chamonix.    I like them enough and know they aren't going to last long.  The inners are coming apart on both pair of my boots, new Guides and Ultras.   And I have had friends collapse the toe box on the new Phantom Guides.  Scarpa NA wanted nothing to do with the obvious warranty issue.  Thankfully the UK importer took care of the problem with a complete refund.
Nov. 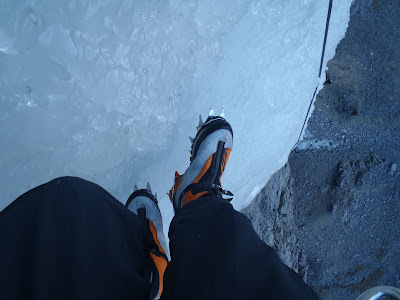 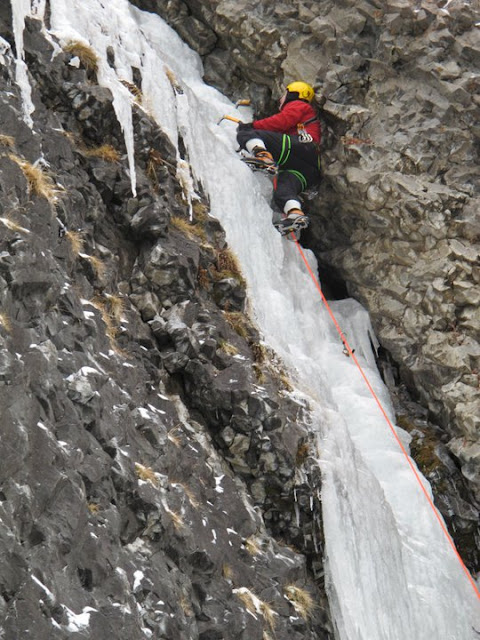 For Jan. it was Spantiks in Canada and during Feb in Chamonix as well.  March was a toss up between singles and dbls.
If nothing else writing a bog post like this reminds me I have gotten some good climbing in this winter season. Nothing spetacular by any count but it was fun ;-)
Posted by Dane at 10:06 AM

Labels: boots, feet, fit, what works for me

Dane do you have a pair of the Phanom 6000's? Do you like them more than your spantiks? I see that your double boot of choice is the Spantik.

Daniel, I did have a pair of the 6000. Found them a little tight in the size I originally ordered. By the time I returned them the size I needed wasn't available. I went with the Spantik because it was easy to get and I found it on sale for $450 delivered. Hard to pass up.

Spantik is a great boot. Could easily be argued as the "best" dbl boot. Having climbed in the Baruntse, Spantik and 6000 each has advantages imo. None of them are a "bad" boot. No question "the" most used dbl boot in Chamonix this winter was the Spantik. Snell's had literally dozens of them in stock on the shelf in every size and 1/2 sizes. And I saw dozens of Spantik in the trams and in the mtn huts.

I also talked with Will Sim a bit in person about his 6000s. He has climbed as much technical ground as anyone in the 6000. I think he and I agree on the advantages and weaknesses of the 6000.