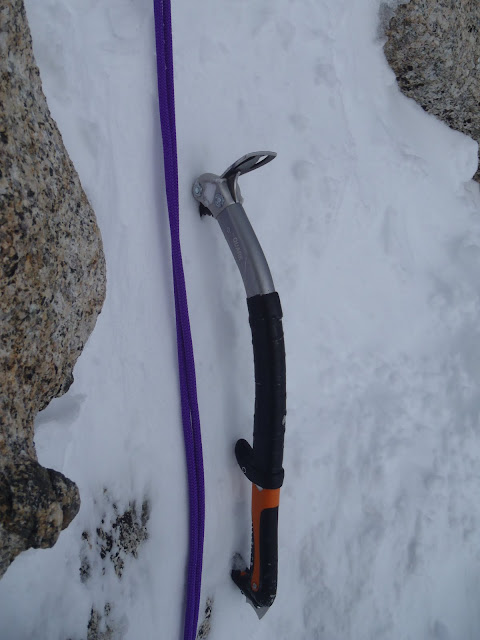 New Quark buried in Neve with a lwt C-T adze.
Hardly new now as the first tools showed up here in the States back in Oct/Nov. of 2010.  The issues with the new Nomic and Ergo appeared and for one reason or another even the unaffected Quarks weren't available in large numbers again until mid Feb. 2011.  I played with a pair at the Bozeman Icefest.  But wasn't able to get my own pair until the week before I left for Chamonix in late March. For may folks in the warmer parts of the US the ice season was winding down by that time.the tools were available again.  Hard to justify new tools at full price at the tail end of your season not knowing what will be available next year.
(I don't know of anything new coming along for 2011-2012) 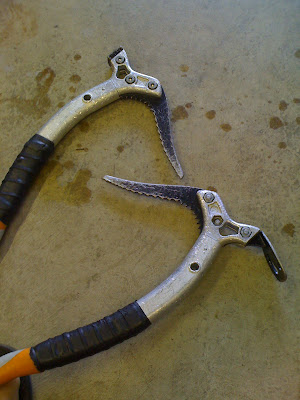 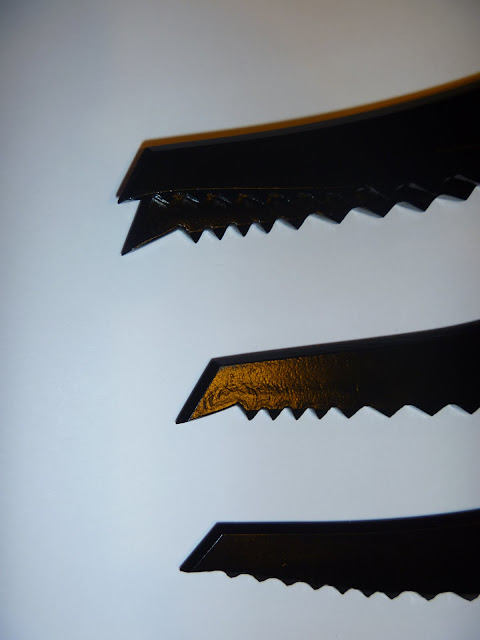 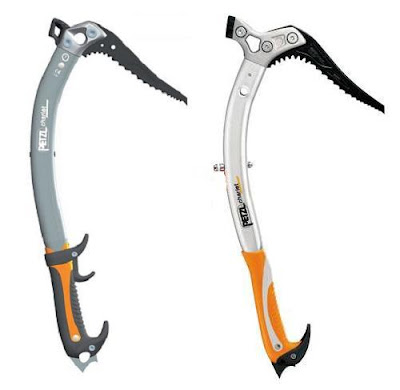 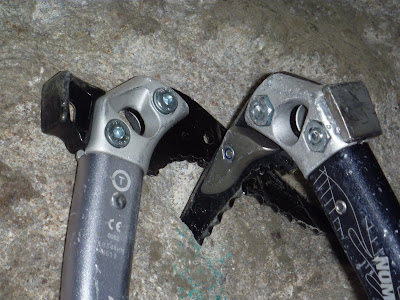 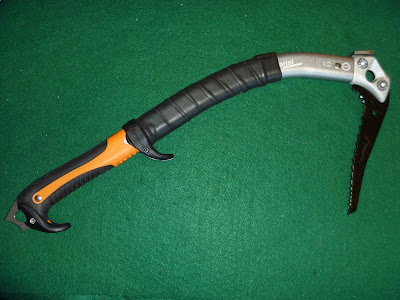 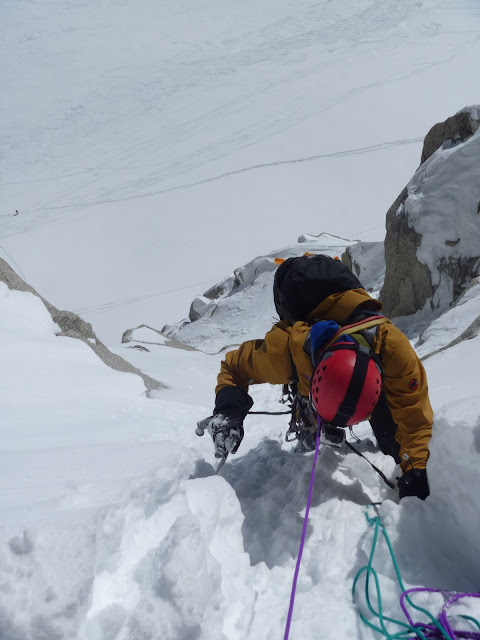 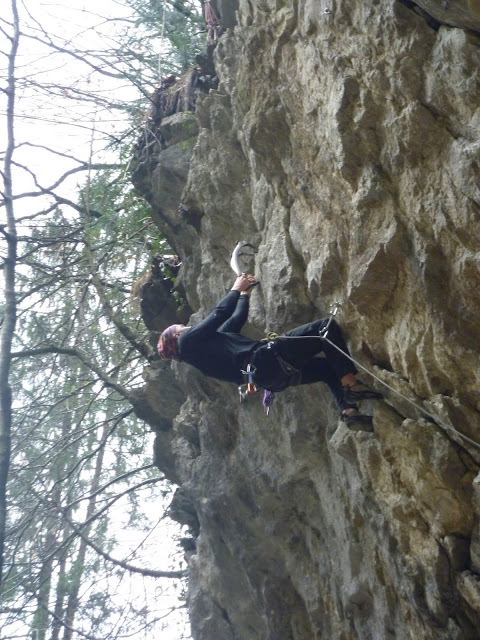 I have climbed with the Nomic almost exclusively since it became available.   The Quark before that.   Abandoning every other tool in my quiver sometimes to my detriment.  Only the new Ergo has swayed me until now.   The new Quark has taken the majority of technical advantages of the Nomic and added them to a more vestal shaft of the older Quark.  All the while giving you a majority of the Nomic's advantages in one form or another (the moving slider grip)  while offering some additional advantages on less technical ground.  The new Quark is one of the few tools imo that rivals and generally betters the original Nomic as a truly all around tool.
Hard not to be pleased with the newest Quark.  For many the Quark will be a better (and more appreciated) all around tool.
Seems a lot like this one, just done up a little better :-) 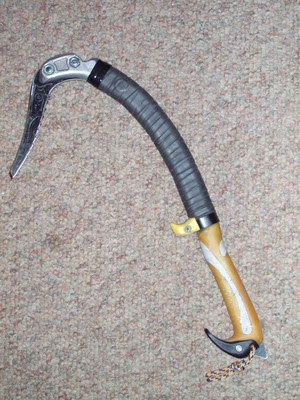 Where is that drytool practise crag? Somewhere in the pacific northwest?

Interesting, I have a 4 yr old pr of Quarks that I love and they have always worked well in Scandinavia. I was set on getting the Nomics this season but was disappointed with the recall and set the money aside till next season. Would that still be a good choice to get the Nomics, or should I replace my quarks with the newer version?

NW? I wish. It is on the creek just behind Spa and old Sanitarium in Saint-Gervais-Le Fayet near Chamonix. Well developed obviously and pretty cool at that, about 40 m high.

Nomic or Quark? Tough question. Quark will be more durable. If you are still climbing on the old Quarks you'll love the new ones.

Jack who is shown dry tooling in the the blog post has both old Nomics and new Quarks. I noticed he choose to bring the new Quarks to Europe for his winter season and not the Nomic. FWIW.

I have climbed all season with the new quark and I love them, I recently got the CT hammers and I really want to try them out with my Quark, make the tool lighter and even more snappy. Might be good for the alpine unless you encounter bullet proof ice then having the pick weights on with the CT hammers would be more ideal. I am going to try them out in AK in a couple of weeks. I sure like those hammers! Now I can change my picks with my hands and no pounding.....

Do you know of any practise drytooling areas in the PNW? I live in Vancouver.

There is one in our local area but it isn't steep enough. Better stuff near Snoqualimie and more in the planning. I would think there would be something local to Portland but don't know what it is. Try asking on cascadeclimbers.com

"New Quark buried in Neve with a lwt C-T adze."

are making adze as well as hammers?

Ha, ha! You caught that ;) Just the one. I made it for my own use just to see if I could improve on the Petzl version. Easy enough, better angle and 1/2 the weight.

Thanks for the review. I have an pair of the old style Quarks, (though modified with the Trigrest and the Griprest.) As you noted previously, it had become very hard to locate the old style Cascade pick. No one online seemed to carry them. Neptune Mountaineering (Boulder, CO) said they could special order them for me, and sure enough they were able to get them. When I picked up my pick, I noticed they had a good surplus of them. Not sure how long Petzl intends to keep making them, but it's good to know they are still available.

CPH...good catch. I just bought a pair of the old Nomic Cascade picks online two days ago...got them today. Seems cascade picks for the old Quark and the original Nomic are available again for some reason now that winter is mostly over :)

How did you fix the trigger? I dont like the index finger catch thingy, but if i just remove it and tighten the bolt down it leaves about a quarter inch of the bolt exposed, and i dont want to snag that on a jacket/glove. I also am kinda skeptical on if fixing the trigger that way would hold up to repeated heavy loads (such as matching and shaking out on one tool).

I have a wrap of rubber tape on my Quark shaft. Removed the trigger and bolted the grip rest on. No excessive bolt sticking out. May be not that durable although I have yet to break mine. Easy to replace if you do, unlike the Nomic.

Produce and sell your adzes, pretty please with a cherry on top....

I just got a latest gen quark and don't like the index finger rest either. If I remove it and bolt down the grip rest there's at least a quarter inch of bolt protruding as well. Could snag, cut things, etc.

I just cut the bolt down on a grinder, easy.