SPEED! Also known as being wired...

Ueli Steck on the Matterhorn 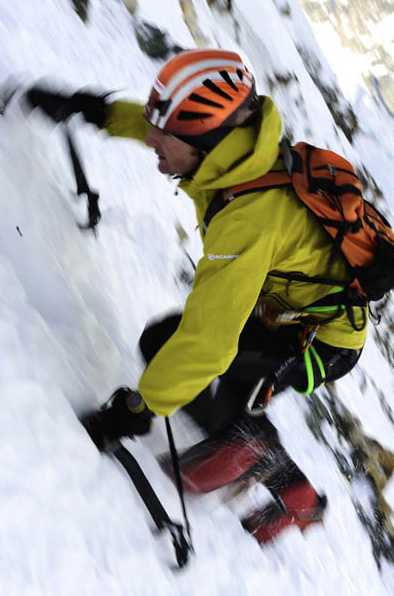 photo by Robert Boesch
http://www.robertboesch.ch/
GJ Blog:  "What speed ascent stands out? What are you most proud of?"


Steck:  "I think my climb on the Grandes Jorasses. It was an onsite climb.  I used my technique learned from the Eiger."

In this case coffee isn't going to help as much as having it wired instead of being wired.

I've spent a good portion of the blog talking about lwt gear and going fast.  Here is a well known and well used technique that is easily ignored or just over looked by those unaware.

For the vast majority of those reading the blog I suspect, like myself, most are all impressed by the speed ascents of hard alpine routes.

What I'd bet is most don't realise is speed comes from being wired.  Hard wired in fact.

Very few climbers will walk up to the Nose on El Cap and attempt a one day ascent.  Likely even fewer capable of doing it.   If you look at the records set on the Nose  the guys that trade that record back and forth have also climbed the Nose generally dozens of times or just as likely their partner has if they haven't.

But actually climb the Nose or Half Dome and it becomes obvious to many that a one day ascent might well be within your own abilities with a little extra effort after dropping some gear.  Not 2 hrs mind you but with in 24hr might seem more reasonable.

I am not taking anything away for anyone here.  I've mentioned some awesome people and tremendous athletes   And the speed climbs are amazing athlete feats.  Very cool stuff all around.  Just thought it worth making the point for those that aspire to climbs like the Nose in a day or the Eiger in a day.  Or for that manner any route that you want to set a personal record on.   Be it Rainier or the Nut Cracker. When I gently remind one of my long time climbing partners just how much difference it makes in route finding,  gear selection and time  if even half the climbing team has been on the route at least one, it can make a huge difference.   Some timers he needs the reminder.   His common answer is "let it go".

But you also have to possess the additional skill set to go faster with the additional  beta.  Point is most of us will need both (skill and knowledge) to go "fast" by today's standards.

But the reason I mention it here....besides the fact it will bug my partner, again, is that those that don't realise what is behind the speed curtain, should be aware of it.

Having a climb wired, be it a boulder problem of a long alpine route makes it easier.  We all know that.  Few of us haven't taken a buddy out and sand bagged them on a climb or had it done to us.   You or they knew where it went and how, we didn't.  Makes a difference on a 10 foot boulder problem and makes a  difference on 6000 foot face.

No surprise but soloing routes where others are climbing makes a huge physiological difference, just as repeating a route that you have done before lowers the emotional strain.  The mind controls the body.

Think about style.  It doesn't take much to realise that solo, on sight, is good style.  Enough so that Steck points it out in an interview.  If you want to go fast the more you know about the climb the faster you can go.   TV Mtn videos, guide books, topos all help.  But knowing it up front is a good place to start as well.
If you want to go faster...climb it first.
Posted by Dane at 1:05 PM