This winter's Ice climbing season started early. Nov. in the Ghost River area of Alberta in fact for me. 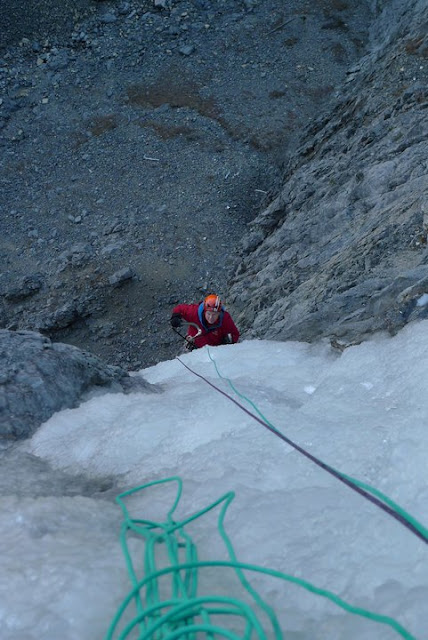 The super cold temps that would later invade Canada and Montana had yet to arrive.   Some where you generally have to pay the price for good early season climbing.  For me that was climbing on harder ice than I am generally use to for the majority of the season.  By Jan and -30C temps in Canada I was pretty much worn down and worn out with hard water ice.

In a typical winter I start climbing water ice in Canada after Christmas and continue through mid April.

This winter I had 4 trips north in before Christmas.

The 5th trip was to the Ice Fields Parkway at the first of the year.  Cold by any standard.  I took dbl boots and for once a pair of BD Cyborgs to easy the pain of pounding toes on hard ice.  It made a difference.

Generally I like climbing in horizontal front point crampons.  They offer marginally more support and resist shearing the front points in wet, soft ice.  I have found most of the cruxes in my own climbing to be sun rotted  vertical ice or just as likely what ice that is there sublimated or just out right melting off the wall.   Places that a set of single vertical front points just don't "cut" it for me.  I hate having my feet pop off on anything including steep or not so steep ice because of the specific tools I have decide to use.

Some huge advantages of a mono point on mixed but even there I will generally try to get away with a set of dual horizontal fronts unless I know it will be a mostly a rock climb with boots and tools required.  Not dry tooling per say but certainly "modern mixed".

I know for my size a set of dual horizontal fronts offer more support and that I am less likely to pop my feet.  Proven to my self over and over again.

But then there is hard ice....not the typical couple of days of hard freeze ice but weeks on end at -20 or less.  The stuff that breaks tools, crampons and dinner plates big enough to break helmets.  Cold...like an animal wanting to kill you.  Polar Circus was a good example in Jan.  Dbl boots and a set of vertical front pointed Cyborgs made it less effort, thankfully. 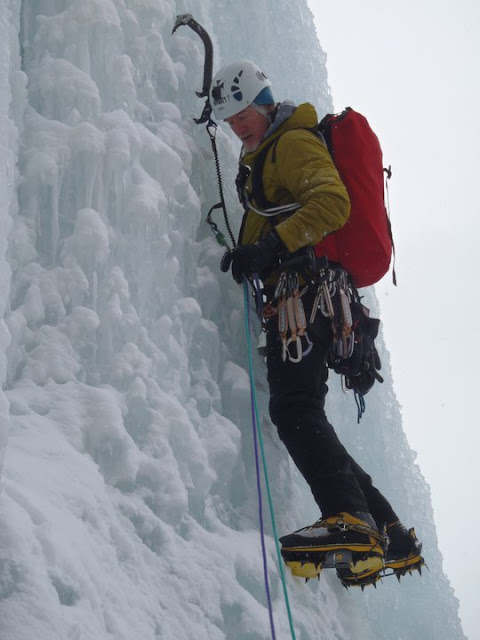 Ha!  Funny now in retrospect as I have never been as cold as I was climbing in Chamonix this winter.  Shivering to the bone cold, on route.  Temps only -20C or so and with a good wind.  Likely most of it was me being less than fit and not acclimatised.  But no matter, I as cold. (reoccurring theme about that trip)

The cold I can deal with..even while bitching about it.  The ice was another matter all together.  The first bit of gully ice I found shattered on impact and was tough even to get enough purchase for a good hook let alone a solid stick.  That bit of ice was mid route on what is generally considered a "rock" route so I blew it off  to the 4 mm pick and my inabilities.  Boy was I mistaken.

The next bit of ice I encountered was at least half gravel and sand, frozen into the back of a corner.  Proper gully ice that.  Thankfully there were enough rocks sticking out of the ice that front points weren't an issue.  Getting a decent stick with my tools was however.  Nomics without pick weights or hammers this time.  My normal choice for Cascade or Rockies mixed and the seemingly hands down preference in the Alps I am bluntly told.  Nomics, Cascade picks and no weights.  Ya, well that choice didn't work so well for me.  And a set of sharp, vertical crampon points is likely the only thing that will consistently penetrate alpine winter ice, aka, Chamonix asphalt.  The ice may look great for climbing but the difference between Neve and old winter water ice is genuine and huge.

No more worrying about shearing a set of dual vertical front points or a mono for that matter through soft ice.  The ice was hard enough to support even my lard ass on a mono in every alpine gully I climbed and half the water falls I did this winter.

So while I am still a big fan of horizontal fronts I am also a huge fan of Monos when I can get away with it and even a bigger fan of dual verts.  And when it is cold...really cold.....I want VERTS. 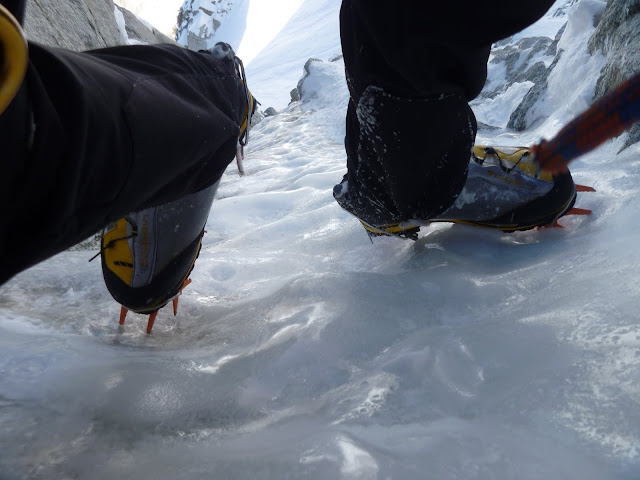 There you go...another change of mind on my part for gear...it can happen on occasion ;-)
Posted by Dane at 2:00 PM

Labels: crampons, what works for me