If you aren't aware of the fact, the blog format  details very accurate data on use and visitors.  So I see where the traffic comes from by country and URL both. 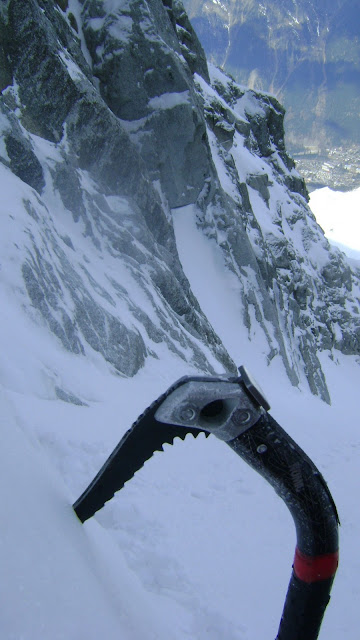 Photo courtesy of Ally Swinton, his Nomic with a C/T hammer, solo on the North Face of the Midi
The majority of the use is from the US and Canada followed closely by the UK and then virtually every alpine country in the world follows.

The US numbers would seem to be a given.  I post enough on Canadian and the UK climbing web sites that it isn't a surprise there.  The rest of the traffic is.

I hope those that already know this will pardon me restating the obvious for us in NA.

Last year a couple of friends asked me how to better learn "alpinism".   What ever that means to you.  For many here in the NW that might mean climbing Ptarmiganm ridge as the ultimate goal or the North face on Mt Temple in the Rockies.  For others the Cassin on Denali.  Big jump between the three.

And any one of them worthy goals.

When I look back at 40 years of alpine climbing the one place that defines the sport and generally the climbers I admire it is Chamonix.  Climbs like the MacIntyre-Colton on the Grand Jorasses define alpinism to me.

There are a couple dozen climbers I suspect in Chamonix-Courmayeur area (or who climb there on a regular basis) that we have never heard of, that have done more hard alpine climbing than anyone from the US, past or present.

But then, do you know the guy who not only broke Ueli Steck's speed record on the Ginat this winter and  carried skis up and over while doing it?  Yes. alpine climbing is all about conditions.  And the Ginat had steps up it earlier in the in the winter.   But still...anyone know this guy or his time?

Chamonix is a big and complex area, has an amazing amount of climbing, (more than any one person will ever do in a life time)  and super easy access (but not as easy as it first appears).  Generally you will be climbing above 11,000 feet if you want to climb on the bigger faces.  And best of all the rock is stellar in comparison to Canadian limestone and the weather stunning in clarity if rather harsh (Alaska harsh) in the storm cycles when they do arrive.  Nothing like it for terrain in North America outside Alaska.


Bottom line here?  If you want to learn what the state of alpine climbing is in the world today...or get better at your own alpine climbing in the shortest amount of time involved, you simply must climb (and you must ski)  in Chamonix.

Lots of places to rock climb in the world.  Yosemite one of the best.  Just as many of us have learned a lot in Yosemite it isn't the end all to rock climbing.  Close may :)   It might well be the one destination you must make it to if you rock climb.  Chamonix is the one place you must visit if you alpine climb.

Take a look at Colin Haley's blog during March and April over the last few years to put the climbing access and skiing into perspective.

I have a few months worth of writing and opinions to catch up on.  Most of that is based on this year's Cham experience.  Some of it a surprise even to me.
Posted by Dane at 11:06 AM