Rafal has done a nice job covering most of the alpine climber's interests.  (look at the link below)   It is summer after all, not much new for the alpine.  But what is new is pretty exciting.  Look for indepth field tests and written reviews on almost everything Rafal has mentioned ASAP.  The idea is to get the word out before the first big freeze of fall.  The Salewa Pro Gaiter and the third generation Batura (they call it #2 but that is incorrect)  will be up first   It should be a good comparison.  Gen. three La Sportiva against the new kid on the block for technical Mtn boots, Salewa.

The new Lynx crampon from Petzl looks even better in person than on paper.   Those I already know I want!  Big raves from the last year's prototypes I am told.   Just too many options to ignore in the new design that no one had yet put in a single package, until now.  And a reasonable retail of $240.  Not the $300+ I was first quoted, thank goodness!   Petzl has upped the game again by all accounts.

My list of winners is La Sportiva's newest Batura, Petzl of course ( new 'pons and the Nomic and Ergo are BACK!) as always and the new blushing bride, Salewa's alpine boots are hopeful. 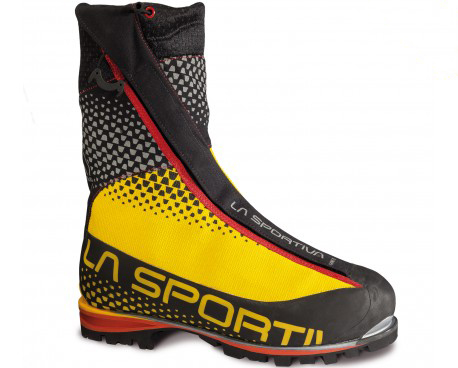 Rafal, thanks for a well written, detailed update.

Dane,
Hadn't checked the blog in awhile, but I had to comment on seeing your photo of the Trappeur Pros. Back in 1975 they were the only mountain boots that fit me (I practically cried after finding out how poorly Super Guides fit my feet). I used and misused those boots doing everything from winter mountaineering and ice climbing in the Adirondaks, climbing the North Ridge of the Grand Teton in dry conditions, to climbing the Northeast Ridge of Bugaboo Spire. Between my inability to rock climb in those boots, the amount of crap I carried on my back, and my lack of aclimitization I ended up spending a warm, but hungry and thirsty night on the Second Ledge of the Grand. Between my continued inability to rock climb in the boots, the verglas on the last couple pitches, and the lack of crap on my back I spent the coldest night of my life about 100 feet from the summit of Bug Spire. I didn't do much more rock climbing in those boots after that. I don't think the pair of boots I'll be bringing to the Tetons on Friday will weigh as much as a single one of those boot did. Hopefully. I've learned something.
Cheers.
Jon