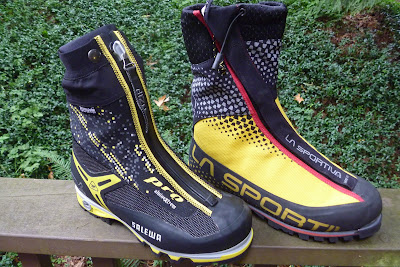 As the rush from the summer OR show slows down I am getting product into review.  Right now I am a little over whelmed with projects.  6 boots alone that need photos, played with and finally reviews written.   This is something I do for fun so I may be a bit over my head at the moment.  Thankfully it is at my pace.

But I have to comment on these two boots again before the reviews are done.  Full reviews coming for both.  The new Batura 2.0 is going to get an exceptionally long comment, simple because it is required to update you on the newest Batura 2.0.

I have barely gotten started on the Salewa Gaiter Pro review.  For anyone unaware I am a big fan of the Dynafit TLT ski boot series.  For those that don't follow the ski industry, the TLT is a game changer there.

And I think the term "game changer" is way over used.  Just not when discussing the TLT.  Think cell phones, electric cars and light bulbs...as game changers.   Then you'll get the idea I am trying to convey.

The design team that worked on the TLT series of boots is also heavily involved in the Salewa Pro Series. No one told me that up front but putting my foot in the new Gaiter Pro it seemed obvious enough.  A closer look at the boot's profile and I had to call Hende and ask.  Sure enough...there is major brain synergy going on between Dynafit and Salewa these days.  And it shows in the Pro Series.  Being able to jump right in  with the big boys in the mtn boot game, first effort, is impressive.

I'm really looking forward to sharing the details and info on both boots.  You are looking at two of the current state of the art in mountain boots.

Mine won't  be the last comparison between these two.
Posted by Dane at 12:04 PM

I wonder if Mammut’s new Nordwand TL will be among the six boots you mentioned. It looks like a very interesting competitor to the Batura, Phantom Guide/Ultra or the new Salewa boot. The weight is claimed to be 1888g size 8,5 UK. It’s announced for this autumn and can already be ordered from a few online retailers, but I haven’t seen it in real yet.

I’m really looking forward to your reviews. Thanks a lot!

The new Mammut looks like a good boot as well. I did spend some time looking at it during the last winter OR show. But it is not a boot I have plans on reviewing currently. That can always change.