This from a forum I contribute to I thought worth repeating.  Taken in the right context it adds to the crampon steel conversation so I pasted it in here.

"Easy to get side tracked on the real issues here, which is failures in design and durability, with comments thrown at you like, "it is your soft or large boot, your lack of skill, your excess body weight, your poor technique" or now even "the rock is too hard".   My take is you are rolling over like a puppy if you actually believe any of that nonsense as a reason for your crampon to fail.


This was one attempted justification given for the lack of durability in SS.
"I've never encountered anything as abrasive as Chamonix alpine granite"

Ya, now about that Chamonix granite? I bought a new pair of Dartwins while in Chamonix. I used them on every mixed climb I did there last winter but the two laps mentioned on the Cosmic with SS. The climbing amounted to several 1000' feet including, you guessed it, two additional laps on the Cosmic.

Dartwins below are never sharpened and left untouched since I got home in April. Judge for yourself how much life is still in these forged, chromoly front points. For me at least, another full winter season (2+ months) in Chamonix again.  But not likely two additional winters.  I'll keep you posted. 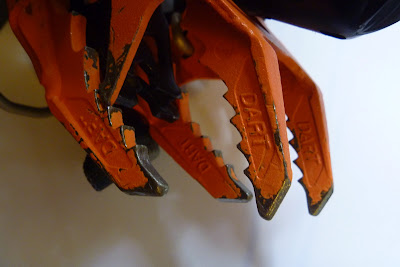 No question Chamonix is hard on gear but I suspect it is because you get to climb mixed any given day if you chose, not that the rock is any harder or more abrasive than granite in Alaska or the Tetons for example. It is just easier to get to and get on with long routes.

If you keep track (and I obviously do) I also find it interesting that the companies based around Chamonix don't have recent issues breaking picks or the more recent issue of crampon failures.  I could have included these Dartwins in my "crampon metal" comments. I didn't because of several reasons. First, the design is totally different as is the surface area contacting the rock. But if you look closely and actually examine the surface area between the two crampon styles there is a stark difference on what is really available for material to prolong the life of your crampons. The last picture reminds me of a razor blade and an axe in profile. Which is why I didn't add the Dartwin to the original conversation. 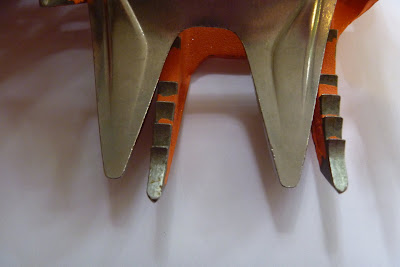 In these photos are fairly new Dartwins and brand new Sabers 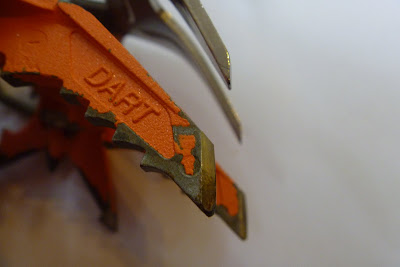