Even Steck admits to an on sight climb as being the better accomplishment.  Jordan didn't require pre inspection or multiple laps in the alpine.

And a bit of tongue in cheek when I say "better" as both are obviously incredible athletes.  Just wanted a little shock value as most haven't heard of, or understand Jordan's accomplishments in North America.  Some perspective?  Many of these climbs take a full day's walk just to get to the base.  Most if not all, have rock much worse than on the Eiger.  There are no trams, no cell service, no fixed gear with few climbers out compared to the Alps.  And finally only the easier routes have seen much traffic.  Almost everything Jordan did was an early solo ascent if not the 1st solo ascent.  I've never heard of anything remotely comparable having been done by one climber in such a short amount of time in North America.  You would have to look long and hard in the Alps to find anyone so eager,  capable and most importantly committed today, let alone in 1994. Read on if you want to know more.

Pictures are literally only of Jordan's "easy" routes from these trips!

"A stiff little reminder of what can be accomplished when you put a few caffeine pills into your butt bag, hang a couple of ropes and your shoes off your harness, and get out whilst everyone else is still "waiting for things to come into condition"

What did YOU do on your summer vacation? In July, visiting German alpinist Frank Jourdan managed a quick two-week trip to the Canmore/Banff/Jasper corridor to finish off a North American tour.

Discovered sleeping in his car at the ACC clubhouse parking lot in Canmore, he was taken into town by staff, coffeed up, and the following amazing tale was extracted in halting English.

It seems that a few days previously, Frank had driven north to the Columbia Icefields where he soloed a route he referred to as "Skyladder Direct" on Mt. Andromeda. He then descended the line, crossed the glacier to the northeast, and ascended "The Shooting Gallery". From there, he traversed the summit of Andromeda, climbed down one of the "Practice Gullies" and moved across too the base of "The Andromeda Strain". 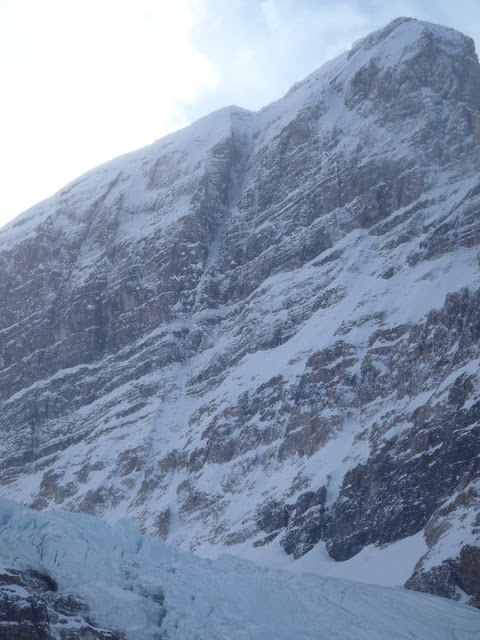 The gully of A-Strain

In the dark now, he ascended the "Strain" by headlamp, carried on past the Andromeda/Athabasca col, over the summit of Athabasca in blowing conditions and what he called "...very strong snow" and arrived back at the parking lot 45 hours after he had left.

Moving north a bit, Frank then soloed the Robinson/Arbic on the North Face of Cromwell.

Next, he attempted the North Face of Alberta. Going up without a rope, Frank decided he didn't like the inconsistent nature of the rock band above the icefield, and so he traversed off the face and descended the NE ridge. As a consolation, he bagged the peak by the Japanese Route before returning to the highway.

He drove to Jasper and had a look at the North Face of Edith Cavell, coming down because of wet rock and unconsolidated snow.

Returning south past Mt. Kitchener, where he soloed the Grand Central Couloir - "Only to be climbed ven zer's eis..." - apparently spending over an hour tunneling through the summit cornice. 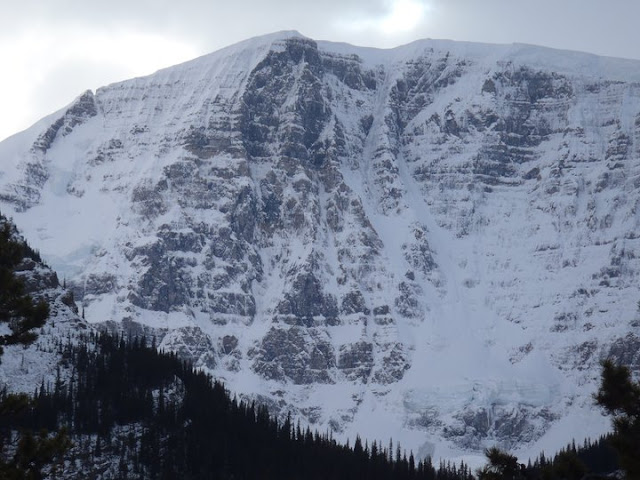 After resting and cragging around Canmore for a few days, Frank decided that he wanted "...perhaps one more peak" before he headed home to Germany. When he showed up at Acephale around noon on Sunday, looking for Todd, we mercilessly insisted that he have a go on Mirror Stage 12b. Heh, heh. After all, we pointed out to this quiet little guy in the pilled fleece, there was already a rope on it; he might as well give it a shot. Protesting that he was "probably quite tired...", he dutifully pulled on a pair of shoes and sent the rig first try. A little while later, he did the same to Bleu du Ciel 12b, loosing his feet during the hideous sloper match at the crux and simply pulling up and locking off while he reached across for the next crimp edge in the sequence.

Now willing to let him be our friend, we engaged Frank in conversation. Turns out he had spent the day before climbing the Blanchard/Robinson on the North Face of Howse Peak, avoiding the A3 chimney and block via the ice in the gash out right (which he admitted was slow going and "very technical" [and which Peter Arbic, the only other person to go that way, reportedly characterizes as "Death" - ed.] and had been forced to sleep on the mountain that night, prior to descending and running up to meet us at the crag." 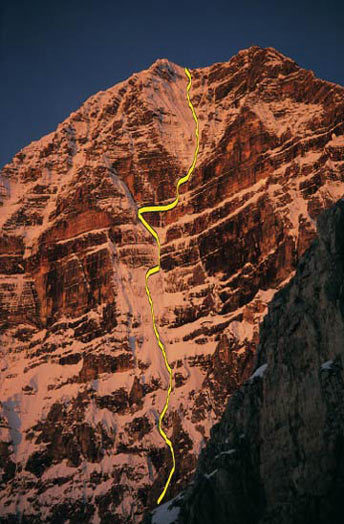 The east face of Mt. Assiniboine, showing Cheesmond-Dick (V 5.9 A2, ca. 1200m, 1982). Frank Jourdan soloed the route in July for its second ascent. It was his third trip to Canada; in July 1994 he soloed a direct variant to Skyladder Direct, then climbed The Shooting Gallery, and then climbed The Andromeda Strain, all on Mt. Andromeda, car-to-car in forty-five hours. He then soloed the Robinson-Arbic on the north face of Cromwell. Next, after attempting the north face of Alberta, he climbed the Japanese Route; then attempted the North Face of Mt. Edith Cavell; then soloed the Grand Central Couloir on Mt. Kitchener; then soloed the Blanchard-Robinson on the north face of Howse Peak. His 2004 tour showed his enthusiasm to be undiminished.  Photo courtesy of  Raphael Slawinski

in his own words

"In July I traveled for the third time to Canada. In spite of bad conditions on the alpine faces I picked off a couple of good routes. After installing a bivy cache at Eiffel Lake I succeeded in climbing the Greenwood-Jones (V 5.8 A1, ca. 1400m, 1969) on the north face of Mt. Temple, 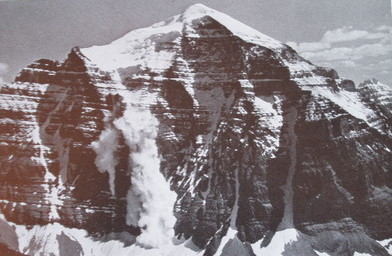 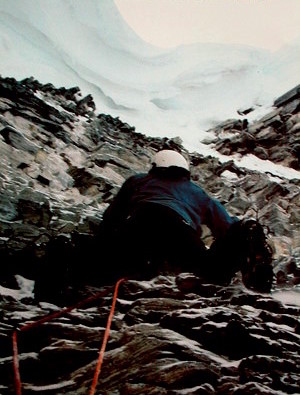 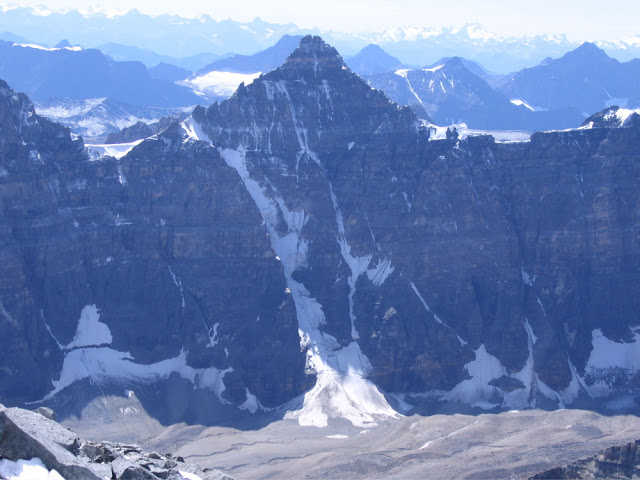 Deltaform's 2000m N. face.  Cheesmond's picture above is the last bit of rotten rock on top of that narrow ice gully.

Two and a half days later, when I was feeling more confident with this type of rock again, I headed to the glacier at the base of the east face of Assiniboine (the longest "twenty-kilometer" hike I ever did). This impressive mixed face was not in good shape either. After resting at the base I started climbing the Cheesmond-Dick (V 5.9 A2, ca. 1200m, 1982) at 2 a.m. I gained height pretty fast, but around 8:30 a.m. I got stuck just below the start of the upper, steeper sections because of intense rockfall. I searched for shelter and waited for dropping temperatures. At 4 p.m. (!) the rockfall abated and I kept going as fast as I could. In some sections, especially the steeper waterfall pitches, the snow and ice were almost gone. Therefore I was forced to climb very tricky, scary, loose and wet mixed terrain with sketchy pro. A ramp system and a traverse to the left leads to a steep rockface which is usually the crux, but, compared to the lower sections, the rock was not too bad. Using free, aid and drytool techniques I reached the easier exit slopes. A final, vertical, ice-and-soft-snow pitch through the cornice at the top made me shit my pants. The face took me thirteen hours to climb (with the stop, twenty-one hours). Another longtime dream was fulfilled.

After some rest days and a twelve-day visit to the remote Waddington Range, where I managed to solo three routes (the Flavelle-Lane route [TD+: 55 degrees 5.8, 980m] on Waddington; a possible new route [5.9+, ca. 650m], left of Perseverence, on the south face of Combatant; and the Southwest Face [TD+: 5.8, 1450m] on Tiedeman), I headed farther north to the main goal of the trip: the 2000-meter unclimbed northwest face of Devils Thumb, the ultimate challenge for a fast solo push. From Petersburg I flew in, highly excited to look at the face, but what a mess: there was no snow and ice at all, only very broken and chossy-looking rock (especially in the lower part). I realized that there is no way to climb this vertical quarry. I left for Canada, where I sat in my car near the river ready to start another attempt on the north face of Mt. Alberta (which I had attempted in 1994, failing below the upper rockband, which scared me too much at the time)—but I hesitated. The last weeks had hurt my knees and back painfully. The stress of being alone in a lot of scary situations had blown my mind, and I decided to not go: I was not motivated or calm enough any more. I started the car, anxious to get back to life, to my friends, to share my beloved red wine... and realizing that once again, I had been lucky to survive."

Nice post Dane. I found Mark Twight's comment in Kiss Or Kill (in the context of discussing Tomo Cesen's climbs) to be fairly telling in its boldness and starkness:

"Frank Jourdan was climbing 30% better than the best guys in the world when [summary of his 1994 trip]".

Strong words from a guy who doesn't pump another climber's tires just for the hell of it.

"Strong words from a guy who doesn't pump another climber's tires just for the hell of it."

I had missed that comment or simply forgotten it. Thanks for pointing it out. But, "strong words indeed".

thank you for putting this up. a great read and great reminder.