Beware the Punter! A cautionary tale. 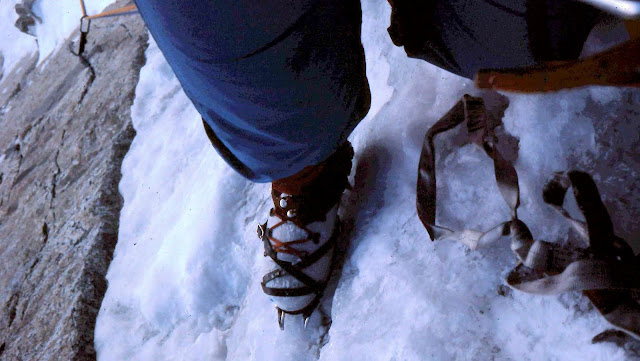 On the then unclimbed N. Face of Mt Hunter, Alaska 1981

1.One who bets (punts) against the bank (banque).

If you don't know what you are capable of,  one way to find out is to bounce your head off a few projects and see what sticks.  Risky business if you are looking for what is possible while alpine climbing.  You could end up dead even if you do get up a new line or two and do everything right.   You are rolling the dice every time you go out...but you do that going to the corner store as well.  More than today at the store than back in '81 it might seem.

You try to limit the odds by experience.

None of these if you are looking for something new.  You'll have to write your own when you are done. 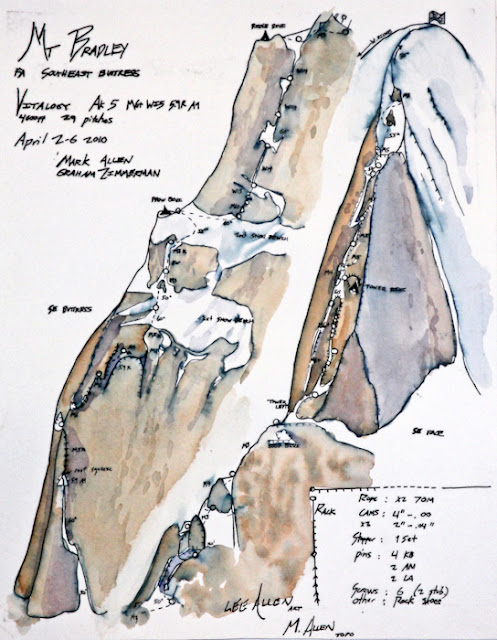 Strong has no excuse...

Yes,  I did see that on a T shirt yesterday.

In 1981, I had already climbed in the Alaska Range 3 times and done a couple of minor first ascents.  But I thought we were prepared technically by climbing harder technical ground in other parts of the world.  My partner this time had already done the S. Face of Denali, a route on Foraker and  he had solo'ed the N face of the Matterhorn.  More importantly he was hungry for more.

Together we had done climbs in the valley in a quick day that seemed pretty good.  We were convinced we really rocked!    Truth is we were punters :) 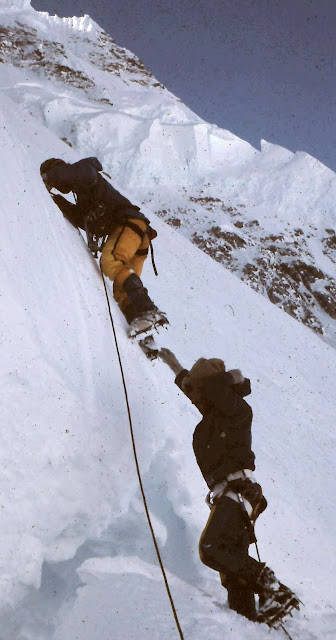 When we helped Mugs and Paul over the 'shrund that morning we were pretty much kitted the same with two glaring exceptions.  One was visible and one wasn't.  The most powerful tool we were missing was a duplicate of  Mug's experience and mind set.   Like having an over grown Ueli Steck as you partner.  Ya, we lacked that :)   Not to say either Brad and I were gumbies, we weren't.  The other thing I left behind was a set of ice tools capable on hard Alaskan ice.

I bet there are few rolling their eyes on that one.  I still do.
I though I knew my shit.  But I didn't.

Brad reminded me after 30 years..not so gently that I had a "small issue at home", a pending divorce.

Never good for the mind.  But here is the real truth or at least part of the truth.  I got scared.

More than one rather speedy modern day alpinist has been brought to reality of the climbing on the North Butt.  The realization, if you aren't up to climbing fast, you are going to spend some miserable nights out.  That hasn't changed.  The fact that some accept the top of the Butt, with still a full 1000m of climbing as the goal, has. 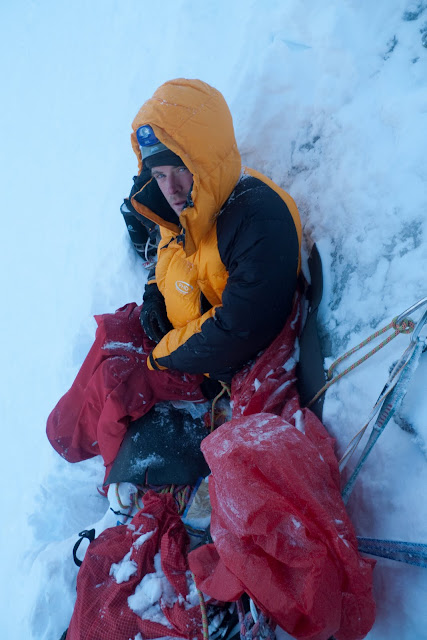 Photo courtesy of Will Sim
http://willsim.blogspot.com/
Jon going old school here on Hunter with no tent.  And suffering through the coldest hours of the twilight night.
The tools?  Ya, I know.  Which is one reason I write this blog.  In 1980 I sewed much of my own gear and tools were changing almost by the month.  I figured any tool would work.   How hard can alpine ice be?
Imagine taking a set of randonee race axes on steep, colfd, hard ice.  Possible but not reassuring.
I had just climbed one of the longest water falls in the world. No water falls on Hunter. (roll of eyes here)   Lwt tools that I could easily plunge make sense...or so I thought.  How bad could the ice climbing be on the Butt?
The answer?  Bad enough.
And no plunging required.
Mark Twight and Scott Backes do the climb, Deprivation,  in
a single round trip push, 13 years later after extended schooling on  Chamonix granite and the correct mind set.

Below is the crux where Brad and I bailed in the first rock band (and I got scared)  and now known at the "death pitch" 30 years later.  I could see that whipper coming. I had no intention of earning my alpine wings there and wanted no part of it.  A few 50m rappels soon followed. 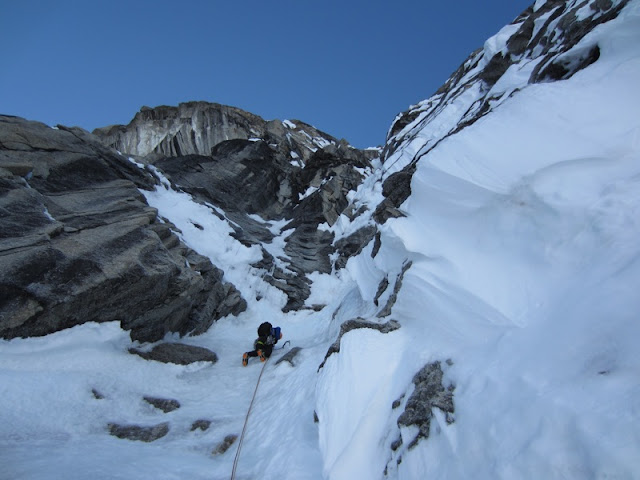 Strike One..unsettled mind
Stike Two...the wrong bit of kit
Strike Three..the reality of a bad night out
The Banque wins! A hard lesson but we lived to play another day.
The divorce was final a few months later.
Strong has no excuse!
And very likely something Mugs would have gotten a good laugh from!
Take only what you need and ignore the rest. 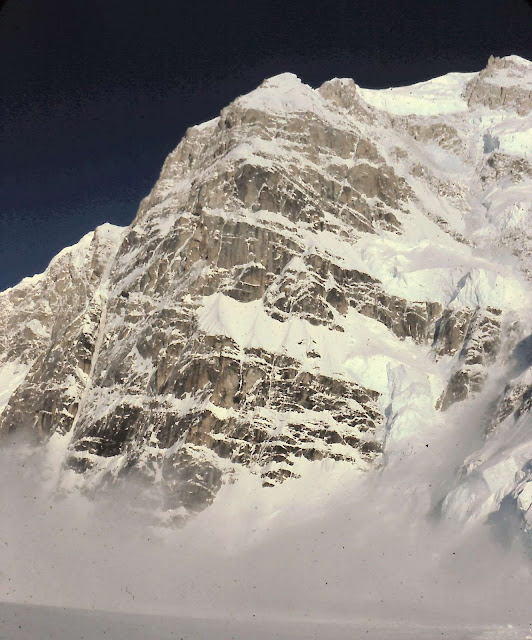 I will tell Paul - he will probably enjoy it

Paul? As in Paul Aubrey? I ended up seeing Mugs off and on over the years while on trips. But no one does this stuff alone. I would love to hear Paul's story of that climb! Obviously an exceptional climber.