This is just a teaser as the newest  2012 version of the Batura just showed up on FED EX and I wanted to share!

Of course I think La Sportiva has some amazing designers.  The newest version and the "Super Gater" clearly show cases that.    We were adding Velcro and zippers on our Super Gaters back in the mid '70s.   And most importantly none of us ever had a failure.  Labor intensive so it adds to the price but a "good step" in the right direction I think.

More to come with a side by side comparison of the current Batura Evo and this ne 2.0 version that will be available in the Spring of 2012. But first impression? I had admittedly scoffed at the title "Batura 2.0." Adding Goretex to a old boot design doesn't make it a "new" boot. But it seems this is a total rebuild not just a glossy new paint job. It may look like a Batura but my impression is we have a new player here not just a few fancy cosmetic improvements. The under 900g weight per boot should be a head turner for those that keep count! And it would seem an even more rigid midsole than the previous boots. Hopefully I'll have some details from both Gore and La Sportiva to fill in the cracks I miss on the newest boot.

I've been duped by early prodction prototypes before.  Hopefully this boot will prove that theory wrong.

Till then enjoy the pictures and think..... ICE :) 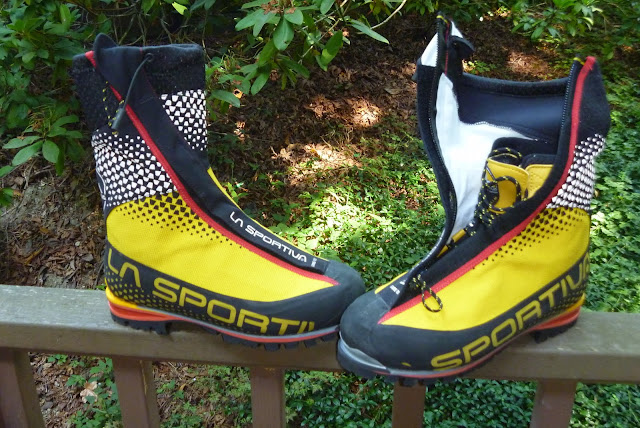 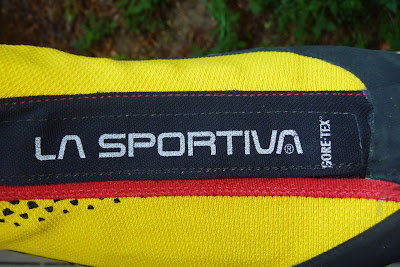 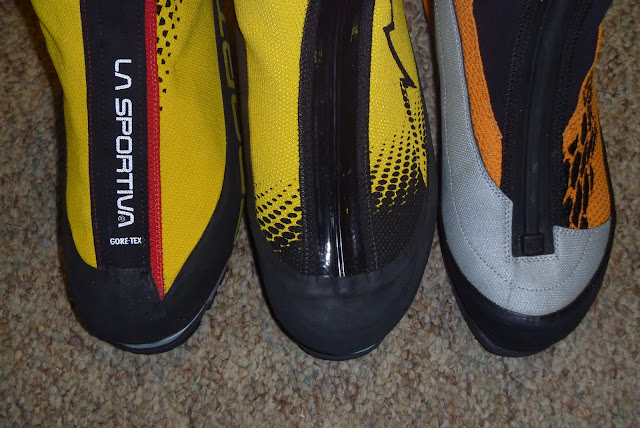 What's your scale showing for weight? They felt super-light at the show... can't wait to get my hands on a pair of these!

Rafal, the early samples are running a full 100g less than the previous version. I'll have more details in the up coming review.

But if production is the same as the early samples they will come in under the Phantom Ultra for weight. If so that will be very impressive.

Been reading your reviews on the two previous Batura vrs. Scarpa guide/ultra. Last season in the Nepal Evo i had major cramping in my arches, it quickly created numerous other foot/muscle problems.

It really stood out to me when you mentioned problems with your feet in the first version of the Batura. What are your thoughts on this subject with the newer black zippered version. I would get the ultras but i am in the USA and that will be a real pain in the rear!!

Thanks for the help!!

Anon, it is a tough question you are asking.

One I keep asking myself over and over and am still looking for answers on.

On one hand I suspect that a rigid sole and a soft ankle boot is not good for your feet and my pediotrist agrees. Most pediotrists will I suspect but I haven't gone into it any further yet. I plan to in the future.

But if a Nepal hurts you a Batura or Phantom is likely to be even worse. The Nepal IMO (size 45) is a very well balanced technical boot in sole rigidity and ankle flex.

I am convinced that some of the long term damage to your feet can be averted by a good orthotic. My prescription pair were $400 and the jury is still out on the value of that expense. But I wished I had done it 15 years ago when my Doctor first suggested it. Then $400 was more than a pair of boots! I would have a better answer today to your question and likely less damage done to my feet if I had been using an orthotic all that time.

Here is the rub. I want the most rigid sole possible on a ice climbing boot. But if you can't walk no boot is going to be a help. The Scarpas flex enough in the sole to walk in comfort and they save my feet some. But damn it, they would climb so much better on ice IMO if the soles were rigid.

I'd take that trade off and deal with it.

The newest Batura seems to have a much more rigid sole (a good thing for climbing) but the ankle has been redesigned again to be softer than the last version. So the boot is a lot different from the past 2 versions of the Batura imo. They (La Sportiva) have also added some sole rocker which again, helps your foot stay healthy when walking.

I know a perscription orthotic will help my foot in this Batura or any ice boot but it won't help what that type of design does to a human foot over time.

Bottom line...get a better insole for any of these boots from the get go. But my orthotics, even though they are as small/thin as possible, won't fit in my Baturas or the Ultra.

BTW I have been bugging Scarpa NA to import the Ultra....they aren't interested..call them and bug 'um. I begged to buy a pair and no dice. Buying them from Europe is not cost effective from what I experienced recently.

I love the old sportiva super gaiters on my tango extremes. Too bad they are about toast since they don't make them anymore.

I might replace them with a batura. I was hoping they would be a little stiffer in the ankle than the last one. Do the new ones at lest have the lacing system from the evo?

Newest lacing system is even better than the last..which was pretty good. But if the 2012/13 sample I have is any indication the ankle support is much softer.

Really very few direct comparisons to make from this version to the current model. Too many things have changed signifigantly.

It might actually be better compared to a Trango Extreme Evo and the Mega ice...as weird as that might sound.

Is it me or does this new version appear to have less bulk in the toe? Maybe not as warm as the previous versions?

Good eye Andy. The boot has been slimmed down a good bit through out. Feed back from other testers is the warmth is still closely compariable side by side. I have yet to make that judgement.

Feed back I got was staying dry (via two layers of Goretex) made for warmer feet than the previous version. At the moment you cna say I am skeptical on that claim because the boots are signifigantly lighter, thinner, and over all a lower profile. More to come asap.

But lighter, lower profile I like a lot....if it is as warm as the previous boots I will be thrilled.

Hi, i'm looking for a newer warmer pair of boots for scottish winter and can't decide which ones! Currently have Freney's but find them not warm enough so was thinking Batura's, do you think i should wait until the new gore tex version or just get the current pair?