The ONE quiver ski?

Does it exist? Or is it just that your available terrain and skiing is limited?

If it does exist what is the single ski ?

Or is it simply the Indian and not the arrow? 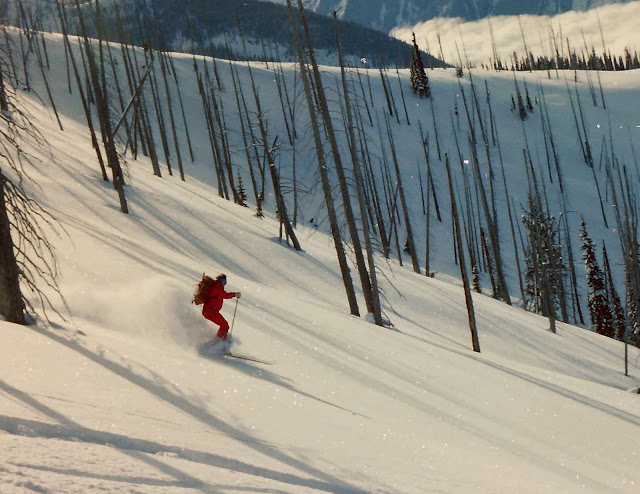 I generally owned several pairs of alpine skis when I worked at a ski area.  But also generally only skied one pair the majority of the time.  Rock skis maybe early season.  Beaters they you didn't mind trashing and a decent pair of skis for the rest of the time.  When I got a chance to do some heli skiing it didn't take long to figure out most of the guides were on shorter Euro mountaineering skis.  Easier to ski in the always changing conditions.  But they were hard to obtain in the early '80s here in the US.  That was my introduction into a 2nd pair of skis or the start of a quiver.  I thought it more the "right tool" for the job.
I started using the short mountaineering skis for early morning bomb runs and avi control work.  They made  the work a lot easier.  By mid morning I would usually change back to my long boards and enjoy the groomers.
Today on any given day in the winter or spring I might ski groomed, face shot powder off piste, 10K vertical gain by foot for a 11K drop or a steep corn gully I have to hike into and maybe hike out of as well when I am done.
To be honest I ski much more terrain and different snow conditions now than I did guiding and skiing 12 months of the year in the distant past.  Strange as that might sound.
Different skis for every occasion seems like a good thing :)
I have one or two that are good for most things.  But nothing I would like to be on every where I am willing to ski now.
But if you have that magical ski you take every where I would love to hear about it!!
Posted by Dane at 12:00 PM

I've been skiing on a pair of Line Prophet 100s for the last few years and love them. They are classified as an all mountain ski, and ski great on any and all conditions. If I know I am going to be on the east coast then I have my edges tuned (typically done by somebody on the east coast as they always do a nice stone grind), but if I am back on the west coast I detune the edges. They have enough float (100mm under foot, and 134mm up front) that they handle powder fine, but make nice turns on ice as well.

I have a pair of touring bindings and boots that I use on them, so they get many miles put on for touring purposes. They are heavy skis, but they are not marketed for the "touring crowd".
For me they are my one ski quiver, but that is mainly because I don't have the money to spread out for multiple pairs (not when boots cost 800+!!). Although I did buy last season the K2 Hellbents which I have only used for half a day, but at 122mm under foot and full rocker they are a dream powder ski!!

Jared? More like the Indian not the arrow in your case :) I was thinking about your crew specifically when I wrote this one.

Funny though, the one pair I could live with, are very similar to your suggestion :)

Hey Noah, The MA SL is one ski I would like to own. How about some details? Boots, bindings, weight height and ability. And where exactly is everywhere? :)

I've skied my 65 mm waisted skis in every condition I can imagine. On anything hardpack, they rip. On consolidated powder, they do fine as well, GS turns in the back seat work, and wiggle turns are an option too. There are two types of conditions where I've wished for a different ski: (a) bottomless pow, i.e. 30 inches + of blower (we get that sometimes in the Wasatch), and (b) really sloppy mank (like we had in June when we raced the Grand). Though I forget those wishes when it's time to pick my ski for the next outing.

I'm not saying a 65mm ski works for everyone, but I am saying that you can get away with more (err less) than you think.

I have enough difficulty trying to convince skiers that a waist width in the mid 70s is adequate for consolidated conditions, and here Jared is extolling the virtues of full-on race skis for [almost] all conditions!
Seriously though, although I have used my race skis (Movement Fish-X) for some touring, overall I think the extra weight of a ski in the mid 70s (currently Trab Duo Sint Aero, but after five seasons thinking about the new La Sportiva RST) is more than justified.
For the quiver of one though, I agree with something like the MA SL. I had it for a season, and liked it, although now for that slot in the quiver I have the Movement Logic-X: even lighter (noticeably so) and a tighter turn radius (which personally I prefer, although others might not).

Definetly not uber light, but still lighter than what i usually see around here. This past season i skied 170 vectors with tlt speeds , and TLT5's. I thought the vectors were great. Even skied a resort day (no new snow) on this set up. I was surprised that i could really rail turns on the hard pack when i learnt to really trust my stuff at speed and get forward.

I found that the Se7en Summits were really good on the late season ice at Crystal. Skied lifts there on a 163cm 7s and the TLTs (both Carbon and Mtn) and no tongues. Loved the set up. Which made me think about this topic more than once.

7s in a 170 (or any of the Dynafits with a similar side cut/width) ) might be fun. Movement and the LS RTS are worth a look I bet as well.

I have been skiing the Mustaghs all season in everything from cement to powder to hardpack. So far they are my to choice for steep and technical terrain.

I went with the Mustaghs for the balance of stiffness, light weight, and a little extra width. I paired them up with dyanfit vertical ST's (wish I could run low tech lights, but the inserts won't allow it.) TlT 5 Mountains have made for a great match. My Garmont Radiums are way too much boot for the ski. Scarpa Maestrales are better but still overdrive them at times.

So far they have gotten me up and down 14ers and 13ers in the Sierra and Colorado.

Oh, and I'm 6 foot, 170lbs. The 178 is a great length for me. Turns tight, handles ice without too much chatter, and jump turns with ease.

K2 Wayback!
A veritable One quiver ski.
It's light, stable, strong, good turn radius, a litle rocker in the front and flat tails. Good quality and bombproof. Can ski from hardpack to deep pow,to wet spring snow.
It can do anything!
For me the best option to have just one ski.

I'm pretty stoked on the dynafit Broad Peak 167cm's right now with speeds and tlt5's but I have yet to ski them in deep pow... the waybacks in 174 are fantastic also though and maybe a little more versatile in deeper snow, I'll find out this winter! Jared is definitely right though, as long as you are a technically good skier you can get away with sooo much less than you think you can. I've skied race skis in 18in of slop and it wasn't all that enjoyable but it was still possible...

I've been using a pair of 167cm Broad Peaks all summer. Awesome ski by any measure. So much gear, so little time :)