Be attentive when placing ice screws!

A Grivel Helix buried with some terrain protection..but it wasn't an intentional act.   And until now I hadn't  thought much about the issue.  I wonder how many of us have? 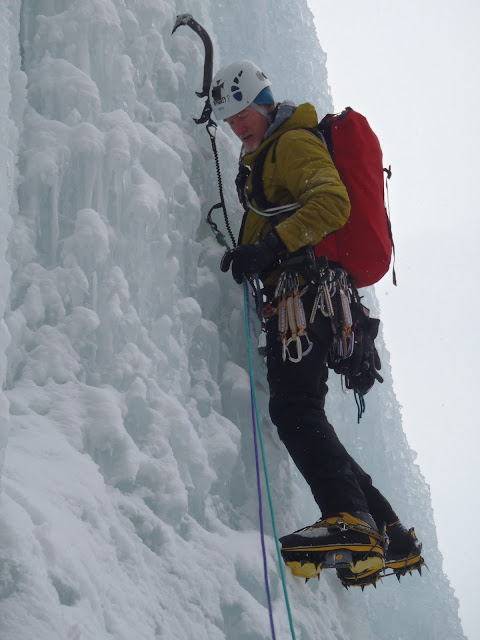 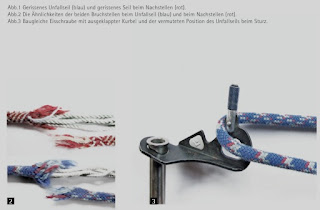 The German DAV report and its pictures discussed in this entry are clear as to the issue but sadly I can't copy the context.  If anyone finds a version I can copy and paste [thank you Joe for the jpegs]please let me know.


"There was a ice climbing accident last season, no one got hurt but it could have ended really bad and the ice climbers were using our (BD) Express screws. Christ Semmel working for DAV investigated the accident and attached is his report in German. I have below a short summary in English.

Course of Action:
2 Ice climbers doing a multipitch route in Austria, using Mammut double ropes, for protection BD Express Ice Screw with a Austria Alpin QD Easy Classic and for belay a reverso. The axe and crampons of the lead climber (belayed from below) did pull out and the climber fell 12 m without ice contact or injury, but the mantel ripped on one of the ropes (see photo page one, blue rope). Chris came to the conclusion that the rope ripped because it was pulled over the crank knob of the ice screw. The photo on page one, red rope is the rope which they have tested and pulled over a crank knob. Chris is not negative against our ice screw’s and the conclusion is that when ice climbing with ice screw’s with crank knobs it is important to fold them in after use. Also he recommends the use of ice screws with crank knobs that you can fold in.


I use and like both the BD Express and Grivel Helix.

I do how ever use Grivel Helix in much of my own steep water ice climbing with an obvious crank knob that does not fold in.  Worth noting the BD knobs are sharp in comparison.  It should be pretty obvious you don't want a rope running over them that will take weight.  The BD knob diameter at the small end is 9.5mm and the Grivel 15.5mm.   The Grivel knob is a synthetic, likely Delrin and smooth.   BD's knob is knurled aluminum and likely the last thing any of us want to run a rope over.    I don't want my rope running over either in a fall.  But if given a choice...I'll take a folded knob over the Grivel option.

But that isn't the total story.  You need to know more.

The direction at which you clip the hangers should also be very different on the BD as opposed to the Grivel screws.   The Grivel hanger offers a bit more play to set a screw and have the hanger flex on the screw to clear the ice.   That allows the Grivel knob to be closer to the ice where the BD hanger will always be forced intentionally to the outside.  Flip the BD knob down and you won't have a problem there.  Not so on the Grivel as you have no option but to hide the know in the terrain.  .

I disagree some what with Magnus' synopsis of the report and if that was accurate (and no reason to think it was not) the DAV report itself.

Here is why:
It you hang a rope on the Grivel hanger it is more likely to do one of two things in my opinon :
One:  It will slide off to the outside of the hanger on the slick Delrin material

Two:  Or depending on the hanger clearance from the ice get trapped behind the hanger and run on the 16.5mm screw body itself and or the horizontally positioned hanger body.

Either option I would prefer to knurled aluminum and a vertical positioned 2.5mm thick stainless hanger.  So close your knobs on the BD Express screws!  And I wouldn't use screws with a fixed small diameter (knurled or not)  knob that mimics BD's hanger design is what I take away from this.  It is splitting hairs but important hairs I think.

It is all about the details, be careful out there! 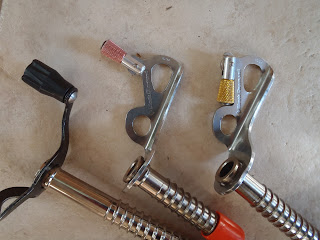 A Grivel Helix with the black knob and two BD Express, red knob up and the yellow knob tucked in.  Note the Grivel hanger is reversed compared to how it would actually be placed in the ice for this photo. 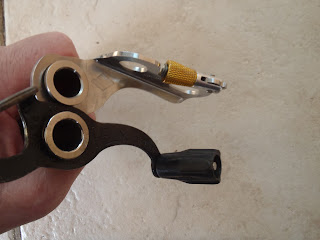 Obvious difference in the Grivel horizontal hanger and BD's vertical hanger.  This is not the position the Grivel screw would normally be placed but 180 degrees reversed.  Knob up on Grivel.   Knob down for BD. 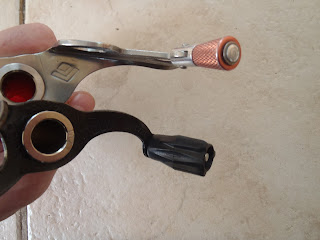 A long 2.7mm "blade" before you get to the knurled aluminum knob on the BD screw. Beal 7.8 Ice twin on the BD knob which when left open caused a sheath failure in the fall.


I have no doubt you could catch a rope on the Grivel hanger, which you really do not want to do. Bottom line is be careful  out there and think about each  and every placement.  For my money twin or dbl ropes on ice make a lot of sense.

Two pictures of the Grivel Helix in the position a rope would normally be caught from above.  With the hanger totally at the end of its movement and the carabiner hole is to the inside, the knob is angled down so a rope would generally just slip off of it or the rope will run behind the hanger and on to the screw tube body.   This seems an unlikely event (but certainly possible) because only ice behind the knob end of the hanger would force it into this position. 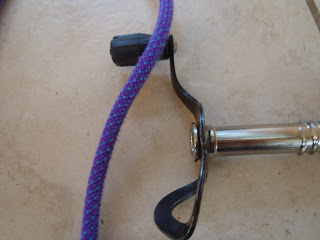 If the hanger does have space behind it after the screw is placed no question you can easily hook the rope there in a fall.
But again better a 17.5mm radius (Grivel's tube) to run your rope over than a 9.5mm radius (BD's knob)  with the addition of several sharp edges to help the damage along. 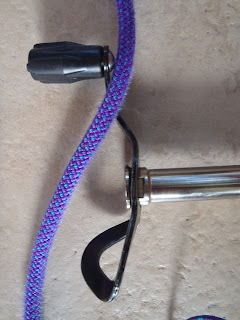 Worth repeating I think.
For my money twin or dbl ropes on ice make a lot of sense.
Miles of vertical ice have been climbed with either style screw and hanger and as many miles with screws and hangers not nearly as good.  I'll continue to climb on both BD and Grivel screws and choose accordingly to which fits my project best.  I'm not suggesting panic here just that you keep your eyes and mind open to the possibilities.
Posted by Dane at 12:58 PM

Watch out for the Omega screws with a fixed knob. Like the old BD Turbo Express but the knob always sticks out and doesn't fold. I can totally see these knobs catch the rope...

Great important blog post... Any further thoughts on the rope catching behind the knob lever on the Grivels? You mention it in your post, but seem to make no big deal of it...

Also, how was Polar Circus this year?

It really does not come as a suprise that catching the rope on a knob of any ice screw could be potentially dangerous to a rope or any item that catches on to the knob. Since I only use BD screws, I always push the knob back down, after placing the screw, unless I forget because I'm too pumped or gripped and I forget because I am trying to move on quickly.

I'm curious as to the angle of the ice where the fall occurred? It would appear, the steeper the ice, the less chance your rope, clothing, etc., would hook or catch the knob.

Thanks for sharing the information.

Hi Oscar, I don't think it is very likely on the Helix. Sure it is possible. I've only seen one real fall on ice but it was a big one and on dbl ropes. We were using Helix but the ice was vertical so no issues on hanging up the rope. PC?..earlier than I have been on it in a few years but the ice was so cold, snowed hard all day and the avi danger so high it pretty much became a slug fest. Fun but more hard fun than real fun :) Cold hands just aren't a pleasure!

Larry? I agree it is obviously going to be an issue of just how steep the ice is as to the potential on hanging a rope. I can't read German and the English synopsis doesn't mention it, sorry. I'll see if I can get that info though and post it.

FWIW.... "the climber fell 12m without ice contact or injury".

35+ foot fall "without ice contact or injury" sounds like vertical ice to me. But I'll check into it.

Peter,
"Known issue, and specifically highlighted in the instructions for BD"

Yes known. But note it was a BD inner office memo not mine. This was the first time an accident was investigated that the knob was almost the deciding factor in a fall.

Never hurts to get a reminder or be made aware of it.

I also don't believe all fixed knobs are the same, which one might think with only a quick read of the English synopsis.

Hi Dane,
If you fall on a grivel helix placed knob up, and your rope catches the knob, wouldn't the torsion applied break the ice around the said screw? Thus once again reducing holding strengh? Add the extra shock, if it happens, of the rope sliding off the knob and being cought by an elongated alpine draw and that sounds pretty bab.
Food for thoughts while were splitting hairs...

"If?" :) Now you are just trying to scare me! I am a big believer in not falling on ice.

My bad, I made a mistake while posting. Here is the message I wanted to leave.
Have a good day.

While were splitting hairs,
If you fall on a correctly placed Grivel helix, and your rope catches the knob, wouldn’t the torsion applied to the screw be transferred to the ice, thus weakening or breaking it?
Add the potential of the rope being released from the knob and shock loading an elongated alpine draw after the above situation. Terrible situation eh?

So, did the rope sheath cut on the hanger part of the ice screw that is exposed when the knob is open or on the crank knob itself? This is best seen in the photo with the purple BEAL 7.8 rope.

If you would like a full translation of the original artical let me know.

Neil I would..you can send it here.

Wait a minute....are people falling while ice climbing now?? I thought that was verboten. Just kidding.

I can send you the original article about the ice screw accident.