How to better your ice climbing? 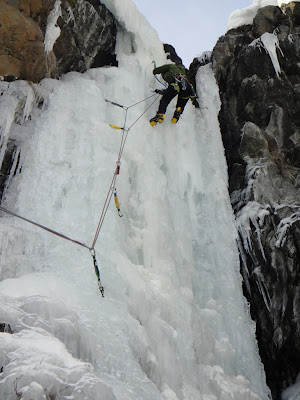 Photos courtesy of the V. and  N.

One of the cool things about having a blog is being able to see where the traffic comes from and what most who read the blog are interested in.

I remember teaching with the now legendary Canadian Guide James Blench, years ago, when he rather pointedly asked me why I didn't "get to it". That while I stood around wide eyed watching him and John Lauchlan whip a bunch of beginning ice climbers through their paces in class. I kept my mouth shut and learned a lot about ice climbing from those two guys.

Note worthy side-bar here, giving credit where it is due
"If you want to go climbing,  anywhere in the world, and really learn the skills more about James in the link below.  James is one of the guys who invented free climbing really steep water ice and is still at it.  No better or more experienced mountain guide working today."


ok, back to the story ;)
I was afraid to open my mouth. Better be seen as knowing something than speaking up and letting the word (or lack of them) out. So take this FWIW ;)

Rock climbing and ice climbing have a few things in common. I am not so sure that there is as much in common as some profess these days though.

First suggestion is get a pair of comfortable, warm and rigid soled boots.

Third is get a set of "typical" 12 point crampons. Sabertooth or G12 style crampon of your choice will do fine.

Yes, I have hear the arguments on mono point crampons and vertical front point crampons. I use them both at times. But I believe the single most important piece of gear for ice climbing is a the combo of rigid soled boot and a equally "rigid" (as in not moving) set of perfectly fit crampons.  The front point direction has little to do with the ability to climb well with crampons on steep ice.

Way more important things to learn about ice climbing than dropping a knee or setting your mono point in your last tool placement. (does any one actually do that?)

This from Will Gadd which I think is spot on:

"Good rock climbers can learn to climb ice a lot faster than good ice climbers can learn to climb rock. I attribute this to the fact that rock climbers already have the fitness, and just require motion training, while most ice climbers are relatively weak. But, while a rock climber can learn to get up about any ice climb in a season or two, just getting up a climb does not mean doing it well. I have seen reasonably competent rock climbers move with glacial speed on what for a good ice climber is 5.5 terrain. I think the real artistry and style of ice climbing is not in just getting up a pitch, but doing so quickly and securely. It's like running--anyone can run a mile, but it's another thing to do it in under five minutes... I would rather see someone climbing well below their max but in total control than someone pushing it on ice, not worth it."

Most ice climbing is actually a battle to conserve energy. You want to stand and stay on your feet, not hang on your arms. If you use some thought most ice can generally be climbing on your feet. Even very difficult WI6 stuff can be climbed much on your feet.

When you do have to hang off your arms do it quickly, hang on bones not muscle and then get back on your feet asap .   Just as you would crack climbing.

Don't kick the ice to death or to build a food hold. Set your crampons on features, weight them and let the crampons..well fit of course..do the work. Better yet look for "steps" on the ice where you can just set your cramponed foot and stand up.  Look for the foot holds or "steps" just as you would on a rock climb.  Think about and look at  what you are climbing.

You should be doing one kick and stand or one placement and stand. Any more and you are wasting energy. Think positive and learn to trust your feet, the first time. PRACTICE.

Tools?...climb leashless.  It is easier. Don't over grip. Climb with thin gloves...learn what you need for gloves to stay warm with. Don't over grip. Thin gloves let you to use a lesser grip. Learn to match and climb on one tool at a time.  You'll save an enormous amount of energy by doing so.   Matching on your tools and leashless are THE two of the major innovations in ice climbing over the last 3 decades.   Follow through on your swing. You are using high clearance, radically curved tools, right? Learn to hook. Hooking saves energy and is much, much faster. You can hook natural features and previous  tool or crampon placements. There is no cheating when it comes to ice. My goal is to hook every placement, on every climb.

Don't dick around on climbs...even practice climbs. Think about what you are doing, stay organized and alert. And climb quickly.

Keep you heels down...as in lower than your front points. Not as important as it use to be....because you are less likely to shear your front points in softer ankled boots. But keeping your heels down will make your calves feel a lot better :)

Helmet head? Use the helmet to deflect dinner places or that bad tool placement you are forced to pull up on once in a while. Turn your head to put your helmet between your face and your tool. Less painful that way when your tool eventually pops. And they will.

Learn to use flat footing or French technique. It is the one technique that will get you through all ice climbing, at any level. Learn to use the entire 12 points of your crampons not just the front two. Using the entire crampon is way more important that having a mono point or vertical front points. Try to remember the great ice faces in the Alps, including the Eiger, were first done with 10 point crampons. Just think what they could have done with the gear we have now. And imagine what you can become capable of with it!

Read the ice.  Know what solid, junk,  new, soft or old ice is.  Know where you have to swing and where it is more likely you can just hook good placements. Recognise the colors and textures and what is good or bad for YOUR INTENDED PURPOSE.   Do you want to hook it quickly or get a bomber screw?   They aren't the same ice.  Get off the vertical any time you get a chance.  Even on vertical ice there are small corners and grooves.  Work them both and stem where it is possible.  Even a small stem can turn the suffer-fest 90 degree pillar into a 85 degree romp. 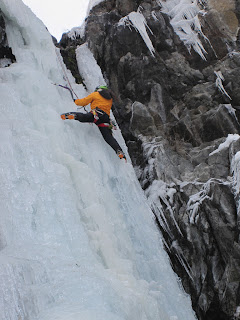 Remember when ice climbing really sucks...and it will at some point....it is just ice climbing, and you chose to be there. Even the hard parts won't last for ever and with even a small amount of thought and precaution you are unlikely to die :)  Relax your grip...your hands will stay warmer.

These aren't all the bit and pieces that will make you a better ice climber.  But it is a good start I think.  "Reading the ice" is equally import in making ice climbing easier.  But that takes time on the ice as well as some thought.  More on that next time.

James would likely still say, "when are you going to get with it".  But this is all I got for the moment.

Remember it really is easy and the basics will generally get you by if you think about it.   Stay just warm enough, climb hard and push your own limits even if that means you do it on a top rope!
Posted by Dane at 2:22 PM

Thanks for all the posts lately Dane. Very informative and very helpful

Good advice, and a convenient list of things to keep in mind while climbing.

Awesome, Dane!
Thanks for the reminders to make this sport safer.

i watch lots of people dick around with either nice reaching tool sticks but crappy little steps, or high stps but then crappy little shoulder-height tool placements.

a good swing with elbow above shoulder height oughta give a nice high stick, then a decnt swinging kick gives a nice high crampon placement, and boom, youve halved your energy expenditure.

also, gives you a better view of you feet, keeps you arm-torso-legs aligned and puts more weight onto your feet.
like you said: crampons just need a tap in, then your body weight (with correct alignment) makes it stick.