A review of the movie, "The Pinnacle" 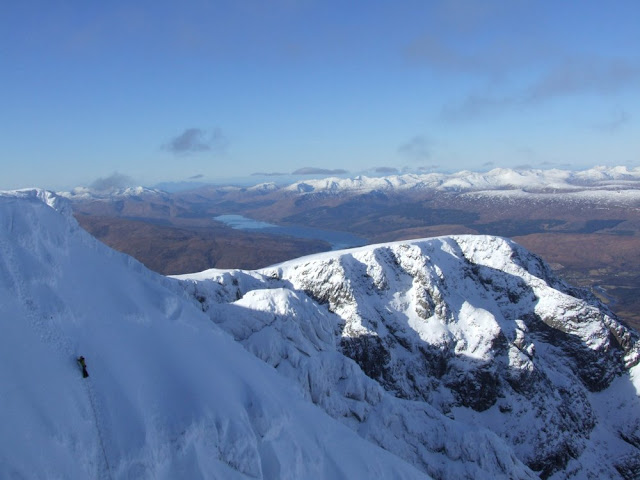 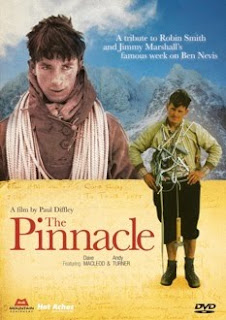 I have mentioned this film several times on the blog.  Last year I really wanted to be in Scotland for the Premier.  For most of us Yanks that was a pipe dream even without a volcano in Iceland.

My copy showed up on Christmas Eve!  I was stoked!!    In the last week I have had a chance to view "Pinnacle" and all the extra footage on the DVD twice.

It should be obvious that I am a student of our sport's history.   That interest is one of the reasons I started the blog.  Waterfall climbing started in the late 60s and early 70s in my part of NA and Canada.  I was lucky enough to latch on to the last bit of it and even luckier to see the sport transformed in the years that came after.   The grand scale of it, now 40 years later, for me is some what akin to having done the West Buttress on Denali in a 3 week slog and then go back years later to do it again in a day.

Your perspective is forever changed by the events you witness.

I have no history of ice climbing in the 60s.  But I knew "my sport" was born there and we all learned how to walk from that beginning.   Sure there were great things done in the Alps the previous 40 years to 1960 but none fired the imagination that Scotland did if for no other reason we were made more aware of it by the British climbing publications, both magazines and books.

I grew up with the stories of Point Five Gully and the Orion Face as much as I did with Annapurna, the Eiger and Everest.

The film maker, Paul Diffley has taken a truly amazing story of one week's climbing in 1960 and one of the original climbers involved and woven a intricate, humorous and touching adventure story from the facts of 50 years ago.

The extras on the interview and other bits of climbing footage just enrich the experience.   This is a film that had me smiling, laughing, enthralled  and at one point brought a tear to my eye.  It is a film I will ponder and reflect on for a long time to come.  And one I will pull off the shelf on occasion and sit with a glass of Scotch and watch again, when I need to remember it all myself.

Likely part of that reverence I attach to this film is the fact that I saw much of the climbing pass in front of me over the last 40 years. And I know that I won't always be pulling down on cold hard ice myself.  But for the moment I am.  And I can still respect the climbers that came before me.  It is obvious they earned it.

Diffley's editing is nothing short of superb.  The camera footage is some of the best winter climbing I have seen on film .    And it is not hard to image Smith and Marshal being just as comfortable and complimentary as MacLeod and Turner are in their partnership.   Both were easy to relate to and enjoyable to watch on film.  Not always easily done for climbers.

Marshal and Smith is the true stars of the movie.   And Smith never utters a word in the entire program.

I suspect if you are on this blog for any of its content, you'll want to see this DVD......more than once and on the biggest screen you can find.

You can order it here:

"The Nevis scenery and the climbs are completely exquisite; rarely has the Ben looked so ethereally beautiful or sugar icingly-enticing."
- Colin Wells - Climb Magazine

"The film is a rare jewel of climbing history and a visual treat for the guilty armchair mountaineer! ... it leaves me with a feeling of profound longing for those special mountaineering moments that become ever more rare and inaccessible."
- Stone Country

And a review much better than mine I just had a chance to read plus two links on Robbin Smith:


Most of the trailers and much of the modern climbing is linked here on the blog as well.  Easy enough to find by checking the "climber, video" in the labels at the bottom right hand corner of each post.
Posted by Dane at 12:17 AM