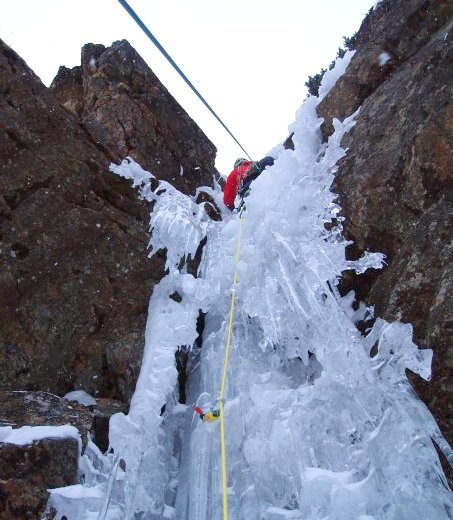 I would prefer to use one of the modern lwt single ropes given the choice in most situations.  Lots of them available these days.  No surprise I am a big fan of the Beal Joker pictured above and own two of them.

But on any route I need to rappel off of I would prefer a twin or maybe a double rope.  But generally a twin.  I find the twin format easy enough to use on most ice routes I am doing and "safe enough".  A double rope will generally add to the safety factor while adding some weight.  Many of the better modern ropes will allow you to use them as a twin and a double and in some cases a twin, double and single.

But you need to play close attention to the following on all these ropes.
Falls/ Impact Force/Elongation/Extension

The down side of the skinny twin ropes now available (or at least the pair I have been using for a while now) is they are really skinny and the more common belay plates can be problematic.   Too fast on steep rappels for my taste and too stretchy sometimes if loaded as a single rope.

My current twin rope system is a pair of Beal Ice Twins @ 7.7mm and 37g per meter.  There are other great ropes and I have used most of them.  I just happen to be on Beal at the moment.  My first and more than half of them bought at retail fwiw. 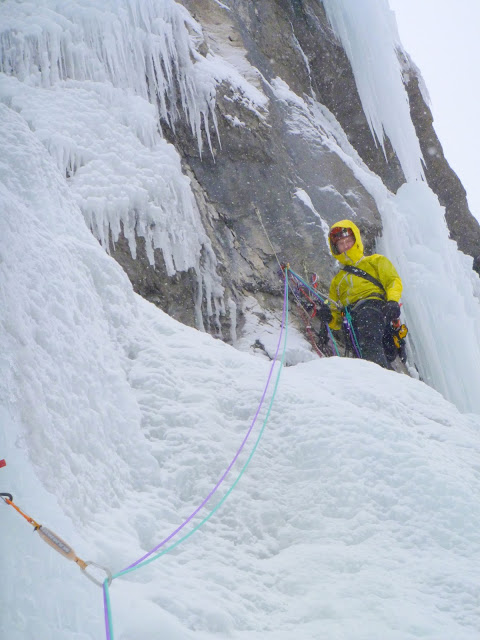 I saw a few new ropes at OR this summer.  Some of them held great interest for me.  Enough interest that I may change a good part of my ice climbing system for some (but not all)  projects. 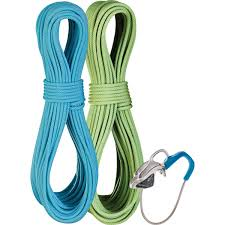 The Edelrid Flycatcher was one @ 6.9mm and 35g per meter.  And no question the skinny winner!   I comes with a specifically designed belay device...which it needs IMO.  All of the ropes mentioned here need extra care on the belays and rappels.  More on this rope system specifically coming up shortly.

More here on my take on ropes:
http://coldthistle.blogspot.com/2013/03/ropes.html 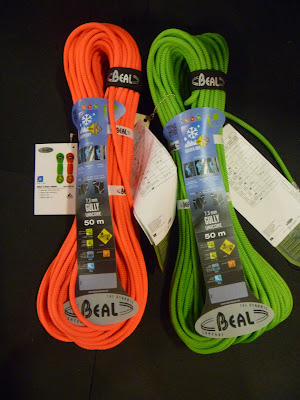 Beal also has the new 7.3mm Gully @ 36gram per meter.   Twin and Dbl ratings.  Late Jan, 2014 delivery.  36gram per and  7.3mm?   Interesting trade off on the already thin and light weight Ice Twin at 38gram per meter and 7.8mm.  Another rope I will be using as a comparison to my Ice Twin when I get the chance. 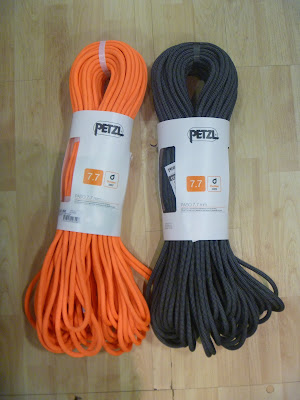 Petzl has a new 7.7mm twin.  Sorry unsure what the weight was on the Petzl.  I would suspect it is close to the Beals offerings.  Mammut has at least one twin @ 42grams per meter.

I should have more info on all these ropes shortly. 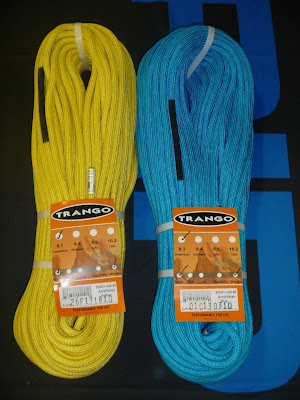 Trango with a 8.1 that is both a twin and a double @ 42grams per meter.  They are a very clean set of ropes and available now.

No doubt I missed a few of the new "skinny ropes".   But things keeping getting lighter and more fragile...truly "race parts" in gear these days.

Problem is..high performance "race parts" fail in a spectacular fashion.  And cost a lot in $ to maintain.  Ask anyone who races cars.  The twins in particular are not "beginners" ropes IMO.  With the current technology I think we are pushing the envelope on ropes.  Sometimes, in some places/circumstances bigger and heavier might just be better and much safer.  I know it is always cheaper.

I like soloing on ice.  Take a look at these ropes yourself.  Decide for yourself just how close you are to soloing.

But you really need to check the ratings (Falls/ Impact Force/Elongation/Extension) on all these ropes to see if they are appropriate for your own use.  YMMV

I am personally a big fan of the Edelrid ropes (they also manufacture for Petzl, at least in Europe), and especially their Swift 8.9, triple rated. Just like a skinny Joker.

But I very often carry something a bit sturdier, especially on Chamonix granite. There was a big accident last year on the Papillons ridge, where a GMHM instructor died during a fall, his Joker got caught in a narrow crack and was cut.

Monster Ropes by Metolius have been my favorite skinny ropes. Have you used or seen them? Definitely under the radar compared to the bigger manufacturers. At 7.8mm and 38g/m they are a contender. I also love the high vis middle marker, drytreated only, and the price.

Interested to see you do a comparison of all these skinny ropes and their UIAA stats.

keep up the good work Dane!

Agreed Brian. I added the Monster stats and your quote to the original article just to keep the article more informative. Carlos loves them but I simply missed them...unitil now. Thanks!

I love the feel of the monster 1/2 ropes and have used them on an ice/snow route and they were great. I also used the same pair on a 5 pitch rock route in the Tetons as they were all we had with us at the time. They showed a lot of wear for just 5 pitches/4 raps back and decided to never again use them for pure rock routes where I can just carry a more durable, but heavier rope. BUT, for ice/snow, frekin awesome!

I've tried the Flycatchers and the Microjul. I agree 6.9mm ropes need a belaydevice that can work with that diameter. I seems however Edelrid made the Microjul from steel, whereas the carabiners you're likely to use with it are made of aluminium. After one use of the ropes&microjul my BD Magnetron Rocklock I used belaying had scratches on it. I wouldn't want my ropes running over those...

I remain unconvinced by the Metolius monster 7.8mm. They are really soft handling.
Having had a set for a few years, they tangle really badly, especially when wet.
I'm a big fan of the weight saving, but need a much stiffer 'cable-like' stiffness from these skinny ropes so rappelling doesn't turn into a series of nightmares.

Old post, but: Sieto, I have noticed the same thing with the mega jul belay device, which is just a larger version of the micro jul. It scratches up my biners too, but though unsightly I don't think it is a safety or wear issue for the ropes - the device scratches the outside of the biner where it locks against the carabiner, not the rope running surface on the inside of the biner.