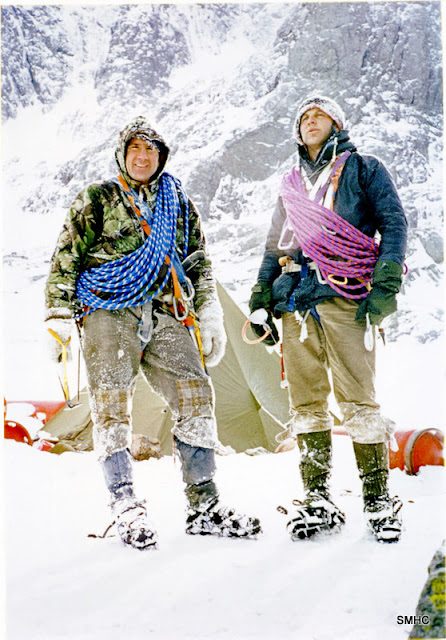 This is a historially signifigant collection of ice climbing info.  Well worth a look. 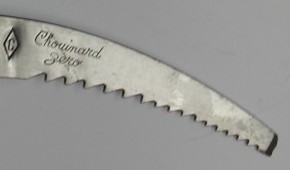 Chouinard zero ice axe. Wooden shaft with metal at base. One hole in middle of head painted blue inside. Adze, serrated pick.Pointed spike on ferrule with two flat sides and a white circle on each.

A Chouinard Zero is the Rolls Royce of ice axes and 40 years after they were first produced folk still seek them out and pay a high price to own one. The only thing that stopped them becoming even more popular was technology, as they arrived just as wooden shafted axes were being replaced by stronger and more versatile metal versions. There were metal and some kind of glass fibre, shafted versions but they were not as iconic as the wooden version. The later zero's (as with the one we have here) had a laminated bamboo shaft to give more strength. Yvon Chounard's first factory was called the Great Pacific Pacific Iron Works and the catalogue from 1978 tells the story:-
"Northwall Hammer and Model Zero ice axe
The Model Zero Axe and the North Wall Hammer are designed for complementary use in vertical ice climbing on waterfalls, in Eastern or Canadian water ice, or for solo or super fast ascents of alpine gullies. These are specialist's tools and are not meant to replace the standard Chouinard Piolet for general Alpine climbing. The main difference in design is in the pick, which has more curve and teeth all the way along its length for better anchorage in piolet traction, but not so much curve that an unnatural swing is required. Both models also have shorter spikes to avoid self-inflicted wounds while swinging in awkward or confined circumstances. Length: 55 cm laminated bamboo shafts. Weight: 1 Ib. 12 oz. Price: $65.00"


"USE
You may wish to soak or rub the shaft with a 50/50 mixture of lin-seed oil and turpentine to prevent water absorption. For winter climb¬ing use pine tar to seal the wood and give a good base for rubbing on X-country wax. A violet wax on a cold day will give superb grip for iced-over mittens. Paint on the tar and carefully heat the handle with a torch until the tar begins to bubble, then wipe off the excess. The carabiner hole is solely a convenience for carrying the axe. It is not to be used for belaying; a shaft-boot belay is better."

Hamish MacInnes is still going strong and dug out this old press release for us:

THE MACINNES ALL METAL ICE AXE & TERRORDACTYL
FROM:
GLENCOE PRODUCTIONS LTD., GLENCOE, ARGYLL PA39 4HX
THE ALL METAL ICE AXE:
The first all metal ice axe was made by Hamlsh Maclnnes in the late 1940's. it was known as 'The Message". But it was not manufactured by him until the early 1960's, using aluminium alloy shafts. The decision to make these all metal ice axes available to the public was taken after Hamish found two wooden axes broken on a fall on Ben Nevis, where a party of three mountaineers were killed. All metal ice axes are now used throughout the world.
They were originally made in a barn at his home in Clencoe and the drop forgings of the production models, the first of their kind, were produced by B. & S. Massey of Manchester, John Byam Grounds, the managing director was himself a keen climber.
The ice axes, with their strong shafts, in place of wooden shafted models and slightly declined picks introduced a new standard of safety in mountaineering.
He continued making them for several years, but when manufacturers internationally copied Hamish's design he wound up production. He felt his aim in introducing a stronger and safer design which helped to save lives had been achieved.
Posted by Dane at 7:25 PM

I went to see this collection last year while making a feature on it for BBC Radio. Incredible to hold the very hammer that Tom Patey had on him when he sadly fell to his death. I also loved the collection of ice axes and vintage Ventile smocks.

Mick has done an amazing job collecting, cataloguing and storing all this memorabilia. It's a pity he hasn't been able to get funding to give it a permanent home open to the public.