How did they do that? Part One 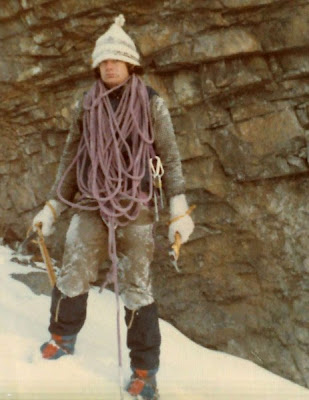 One of the things  the survey has brought up more than once are questions on how I sort through my gear and clothing for a climb.  Fair question.  But you need to realise that every climb is different.  Every eco system is different and some approaches are much harder or easier than  the next.

All that plays significantly in my choices of clothing and gear every outing.  And after 40+ years in the game I still get it all wrong on occasion.  Not because I don't have the right gear...trust me I do.  But I make the wrong choices on that gear for what ever reason.

I have always had the propensity to choose the gear and how I dress for what I envision the conditions to be. (HOPE they would be!)   Some times that vision is based on reality and some times it is based on pure fantasy.    The more I am out climbing (consecutive days ) the better my judgement.  The less I am climbing (once a month?)  the more wishful my thinking.  As in, "I think we'll have a beautiful clear and warm day, after that 4 hr approach hike."  All this while packing up my kit the night before generally.   Or, "the snow will be a perfect.  4" of new powder over a smooth hard pack.  With perfect Spring temps from 4K up to 10K."

Classic example of stupid gear choices and some other mistakes made the previous night or at the last minute prior to leaving the car for a rather simple day trip :
http://coldthistle.blogspot.com/2013/05/dynafit-huascaran-skitake-2.html

Make a big enough mistake and this could easily be the end resut of the same outing:
http://www.seattlepi.com/local/article/Day-hike-turns-deadly-on-Rainier-snowfield-1276084.php

That "perfect weather" just isn't a reality generally!   But I continue to fall for my imaginary traps time and again.  And when I am wrong, I suffer.  Depending on how serious the error, will determine just how much I will suffer.  It could be as simple as a slow boot pack to 10K or violent shivering with cramps while in the fetal position trying to stay warm all night.  I've done both in the last  3 or 4 years.   I'm obviously a slow learner.  And now I keep better track. 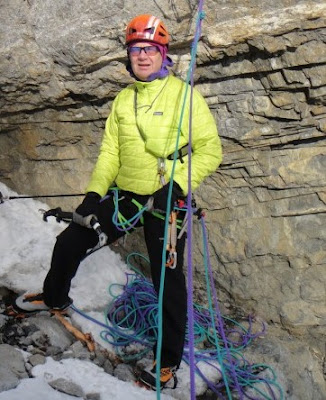 The under discussion is  Cascade Falls within easy eye sight of the Banff City town site, Alberta Canada. The Classic Grade 3 Canadian ice, Solid Grade 4 Scottish I am told. (not that I would know)   300m of ice.  Of that only two solid, 40/45 meter pitches of 70 +/-  ice.  The rest is easier.  But you don't want to fall down it either, as it would likely be fatal.  Avi danger on this route is always high. 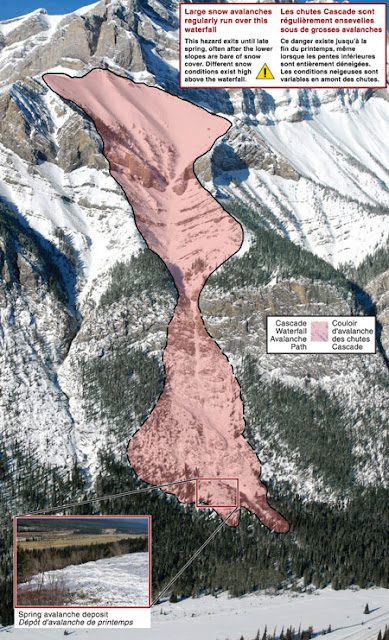 The details on Cascade here:
http://www.canadianrockiesice.com/ice-climbs/bow-valley/cascade-falls/

So this is one climb I don't want to screw up by making a mistake.  Any mistake.  I might miss the clothing or bring the wrong gear but I had better understand the snow pack up high, the sun effect for the day and the huge potential for a likely fatal avalanche here.   It generally gets old enough mid winter in Canada that I do not want to spend a night out unprepared.   I've done this climb many times over the years.  And every year I am more critical of the conditions I will climb it in.  Simply because I know more and understand the snow pack and its dangers better today.  I've even done this one at night to lower the potential of an accident because of poor snow conditions. Likely I should have just begged off and found something different and safer to climb.

But we all have goals.  Cascade was one of my goals for that trip.  I tried to find the safest way possible to get that goal done.  It worked out.  That time.

My point here is it aint the arrow, it is the Indian.   The gear means nothing.  What is between your ears is everything.  Make sure that computer is turned on and fully booted before you start pulling of your longs or racking your kit.

Because there really is so little difference.  "Sure there is",  you say?!   No really, in reality not a lot of difference here in the gear required.

The approach is short.  Literally a few minutes from the car park.  You can see the entire route on the approach and the avi terrain above.  No need for extra dry clothing to change into on this approach because it is so short.  Just slow down a little and stay dry walking up to the base of the climbing.  And if you are lucky you'll be in the sun the entire time.  About as casual as it can get in Canada short of climbing on the the Weeping Wall.  Beat sunset and you'll likely not need extra insulation.  Although you might want some if the wind comes up.  Lots of choices.  Each and every one matters.  Even on a climb as fun and as short as Cascade.

What was used?  Basic set of long john tops and bottoms.  "Soft shell" pants.  Wool then and Arcteryx synthetic now.  The new clothing stretches but aren't as warm as the wool.  Synthetics replace the wool for the most part but didn't have to.  Down vest replaced by a lwt synthetic Patagonia pull over.   But again...no real reason too now.   It is simply fashion for the most part.  Me?  I liek the bright colors!   Helmet over a lwt wind shell hood and skull cap.  Little protection and more warmth in the thick boiled wool hat.  Single boots and full super gaiters in one form or another over them in both cases.  12 point crampons.  I am still convinced the original rigids climbed water ice better than what is generally available now.  But they weren't always reliable.  Sound familiar?

Harness on and gear sling on the shoulder.  Nothing changed but the ability to now rack the screws easier on the harness.  Slings, QDs and rock gear still go on the shoulder sling.  Two tools.  The Nomics likely less useful in varied conditions but way more secure/faster climbing on steep ice.'
And for once, a more reliable tool!  Two hand tools is really enough.  The best tools simply don't break picks.  2 tools is all that is required.   But think how fooked you might well be if you break one?!

One 11mm rope or two 7.7mm ropes?  We used to climb another pitch of generally fantastic alpine snice and then walk and down climb Rogan's to get off.  Now most simply rappel back down the route.

Security equals speed.  Having the last two pitches as the day's goal makes you faster as well.  At the lost of some adventure IMO.  So the more secure tools (Nomics in this case) have turned a 1/2 day or more adventure in to a easy couple of hrs out.  Not so much fun to down climb snow and weirdness with though.  Speed equals safety and more comfort in the clothing you can choose by moving faster and staying drier.  And by all means shortening the objective.  Is a summit required?  Or just a "lower" to get down.  Your decision on how to play the game.

Not that wool can't do as well if applied and used correctly.   I wouldn't be totally unhappy having the same wool clothing available to me now that I had decades ago for the environment and climb in this discussion.

I talk about a lot of gear on this blog.  And some of it is really nice to have and use.  But the best gear everyone already has and it is free.  Your brain.  Just take the time to use it.  The rest of this stuff really doesn't change all that much when you get down to the basics.

Sure I would rather have warm stretchy pants, super light boots and a set of Nomics to ice climb with.  But given a choice between the gear in the top picture and not climbing at all?  I'd take the bamboo piolet and wool every time and still be thrilled about it :)

The blog is all about all gear.  Climbing.....how ever is not.  Never has been. 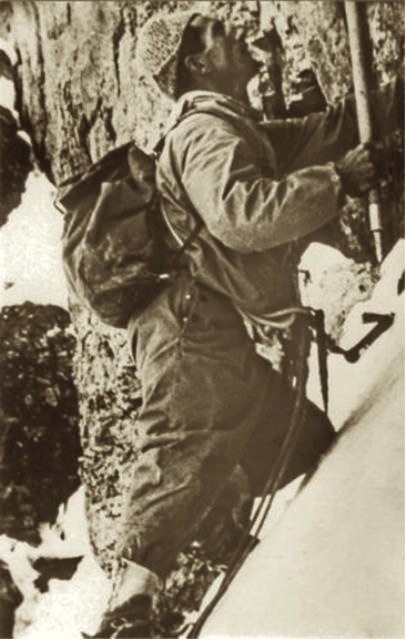 These dudes climbed the Eiger...over 4 days... much of it in storm ..SEVENY FIVE years ago!


Remember to not make all this so hard on yourself!  You don't need new gear or the "best" of what ever that is at the moment to climb, or climb hard.

The gear selection for Cascade Falls is as simple as it gets.  No pack, no water, no food.  We were out both times for only a few hours.

When the sun went behind the mtn and us into shade I got physically cold in both pictures.  I got thirsty and I was hungry long before  driving back into town.  If something had happened to force a night out,  life would have been bleak. Things might well get very serious, very quickly with an accident.

Still, kitted as such I really enjoyed both days out, bitd and more recently.  Uninjured I could survive a night out, with no food and no water.  But it would not be pleasant.  Injured?  All bets are off there. 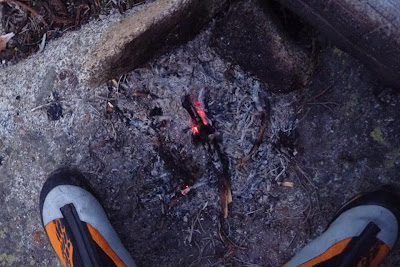 The end result of a 5hr alpine bivy mid April. Never needed a actual fire to stay warm before. Guess I was a little light on gear ;)  Which in turn makes wool clothing a real bargin in retrospect while next to a FIRE!

For longer climbs I can add to the list and include my pack and what is in it.  The food I use, the stove, sleeping bag and tent I bring along when required.  But I find that sort of thing boring :)   What I need/want and the amounts of  food we to eat has changed over time.  Good nutrition is what will keep your brain functioning coherently and help you make good decisions.  Good nutrition will add to your own resolve and determination.  That I do find interesting.  But I am not the guy to be telling you how to eat right for breakfast, let alone while climbing.  Not like I have that all figured out!  There are no secrets to be found here.

If it was always fun, easy and warm everyone would be alpine and ice climbing.  If you need a list and want to be comfortable while having a good adventure, just as likely it isn't going to be much of an adventure.