These day I tend to look at new tools, boots and clothing when I think about ice climbing.  To be honest, once learned plain old ice climbing is pretty simple and basic stuff technically.   But I am still working constantly  to better my own technique.

What I see is some/most climbers new to ice haven't really recognised the range of skills required without someone pointing it out to them.

To climb quickly and use the least amount  of effort the technique I use is an A frame pattern.  As do most.   The tools never get placed on the same level unless you have done something wrong.  One tool placed high, two feet supporting that arm's placement.  Walk up on that placement as high as possible before placing your tool again.  Imagine your body physically in an A pattern.


Will Gadd recently covered it quickly in his blog.

"If you don't have a good placement don't pull up on it. The situation will not improve. Make good placements, which are pretty much always possible. I see so many climbers get shallow placement and then pull up on it anyhow, which leads them to place the second tool at the same level as the poor placement."

More from Dr. Slawinski in his blog.


The basic idea is to cover the most amount of vertical terrain with the least amount of tool placements and effort involved.

If you are unfamiliar with the technique and are looking for a quick explanation, check out Twight's technique at around 3 minutes in the video below.  Rackliff and Twight had ice climbing dialed back in 1988.  Doing it with some pretty basic gear compared to what we use today.  Most would be hard pressed now to keep up.   But you should be trying!    Remember climbing is a thinking man's (or woman's)  game.  Pay attention and think about it.  Climb smarter!


The three pictures below aren't the best but hopefully they will compliment the video to help visualise what I am talking about on the A frame position.  All the photos are on moderate terrain. (the video isn't)   But they show good extension on the tool placements and intentionally climbing high onto the second set of grips.   Jack Roberts in the first photo, myself in the second and Dave Fulton in the third.  (dbl click to see where the tools are).  We have all worked hard to limit the effort involved to climb ice and try to do so with every single placement.  Don't let yourself get lazy.  If you do you will be slow.   On moderate terrain you should push that extension as far as possible and just short of failure, while trusting your feet.   We'll do  the same of steep terrain and just back off a tiny bit on the arm extension to keep the tool placements more secure.  You can see I have short stroked it a bit on my climb in comparison to the other two pictures.   The more tired or scared you get,  the more you should be extending...not less. Because limiting the number of placements is the first BIG step in saving your strength for when you will need it.   Eliminating multiple placements also allows you to climb much, much faster in all ice conditions.  May be as much as twice as fast.

It is a big deal. 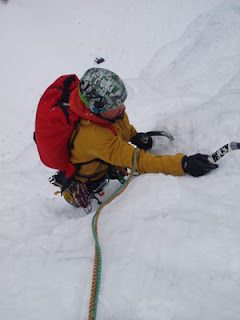 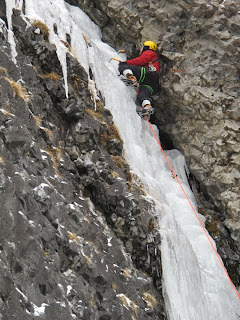 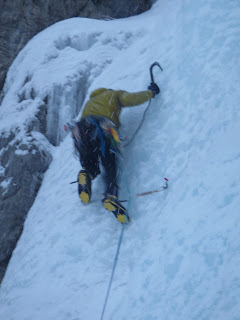 Regarding the Mark Twight video, I notice that he's swinging like he's trying to strike gold -- like really burying the pick to the hilt.

I'm still relatively new to the game, and a few partners have commented that I'm overdriving my picks, which seems likely. How does one find a reasonable tradeoff between secure and massively fatiguing + difficult to remove?

Another example: I see many guides going for very light, apparently shallow sticks, even when soloing.

This is because the technique has evolved with new tools a bit since Twight times. New trend is to just flick the wrist at the end of the swing to get the pick nicely in, but not too deep(this all depends on quality of ice, conditions etc though). And try to hook as much as possible. I was recently climbing WI 5+ and did 90% of it by hooking. And this was same for my foot placements. I did not nearly need to kick at all. And for the first time I did not get pumped at all on this grade ice!

I'm a huge climber, but I've never really gotten into ice climbing, but I've always been very interested. It looks like so much fun! Plus, it would be nice to be able to climb outdoors all year round.