"Here is a bit of rehashed info (from 2010) on the rotation issue some are having with the newest tools.

If you have bought a "new" tool that looks a lot like a Nomic something worth pondering if it isn't "working" quite right for you.  A few people coming from a Nomic are finding an uncomfortable "bounce" in a few of the newer tools on ice and the tool being a little scary when pulling bulges. If you are new to this kind of tool likely you will have even more problems climbing pure ice and be blaming all sorts of things. Generally what is getting blamed is not going to be a "fix".

Climbers have little or no no institutional memory generally.
Yes even a couple of degrees one way or the other on pick angle will make a difference.  But  if it were only that obvious  it would be an easy fix.  Blaming the pick angle as "too steep" generally isn't the problem.  I can think of two tools specifically that opening up the grip even just a little and gaining more rotation in the swing makes a big difference.

It is not a hand /glove size issue for length of grip.  Much as one might first think between pick angle and grip size.  I've found that it is neither of those particular issues. 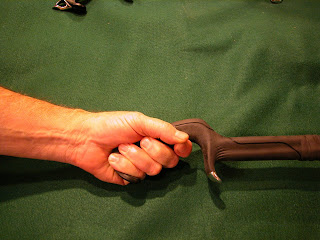 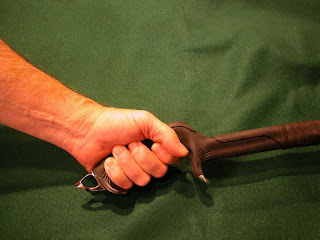 
Many of us asked for a spike on the Nomic.  Then BD gave it to us as the new Fusion. But if you have climbed very long you'll remember how we all choked the end of a shaft to get a better swing on short tools often almost negating/chopping the spike off all together for steep ice performance to eliminate bounce and help pulling bulges

BD's Fusion spike you can remove.  Take a close look at the new DMM, the newest Grivel "Machine",  Edelrid's, Camp's X Dream offering or Trango Raptor.  Not all the grips are the same.  Tight grips for the little pinky limit rotation as do spikes (most every one's) or additional blades (Petzl).  Bigger is likely better when it comes to the size of the constriction for the little finger.   Smaller is better on the spike.  Simply because either in the wrong size (any size?) will limit the rotation available from the tool.  Limited rotation means a unfriendly tool in many ways on pure ice. 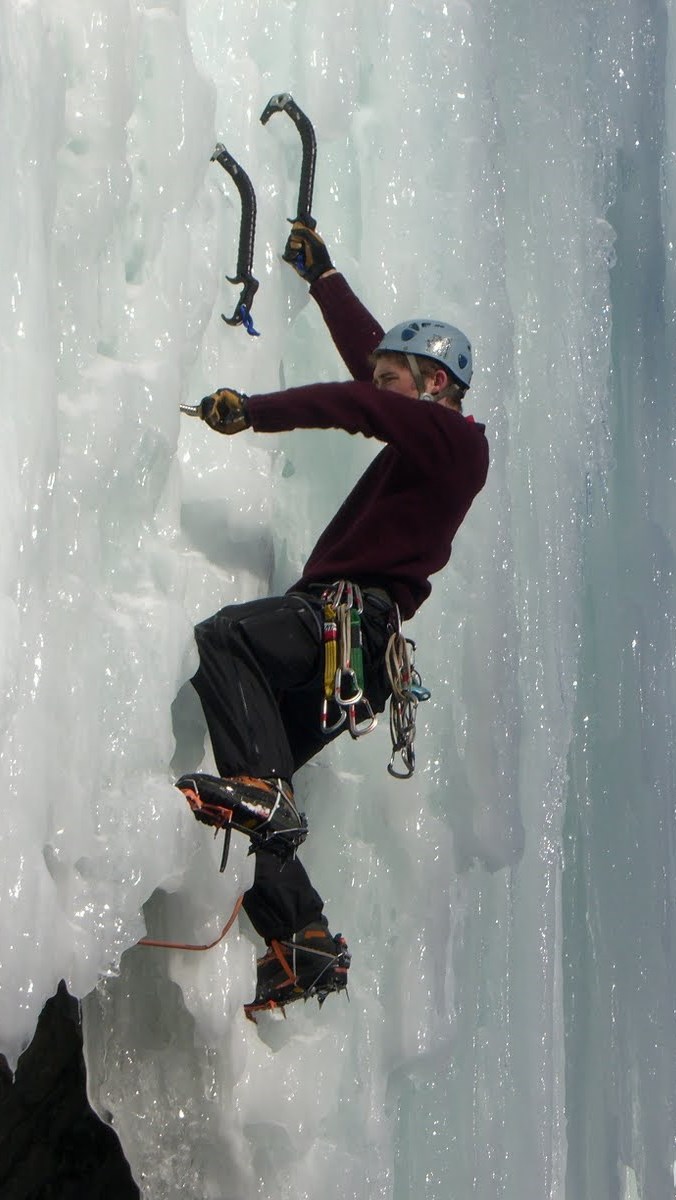 
For some the arc of swing on a new tools with a spike intact is limited to small side of 180 degrees without changing your grip. While the older Nomic and a smooth pommel (no blade) can go something like 210 degrees. Don't hold me to the exact numbers but realise one tool can swing a bigger arc than the other inside the palm of your hand. It is important for pulling bulges. 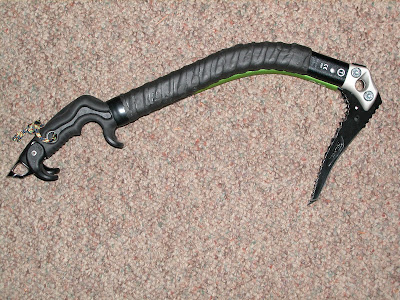 Very cool to have a removable spike or no spike. Remove the spike for steep mixed and ice and you'll gain some but not all of the arc/rotation back. Most of the bounce will also disappear. With the use of a Dremel/grinder/hand file (or just some good rough emery paper) you can get an equal amount of swing arc on the new Fusion/Raptor by rounding the inside and end of the pommel more like the older Nomic grip. Might make a big difference for you if you are having small issues with any of the newer tools with a tight bottom grip.  Opening up the trigger slot on the bottom of the grip will gain  rotation of the tool in your hand.

A simple, inexpensive mod, takes just a few minutes with power tools, that might make a big difference for you. Down side is you loose the umbilical attachment on the spike. But that's not a big deal on hard cragging anyway and most will use umbilicals and the spike on longer stuff no matter what small disadvantages on hard technical ground they both might create.

More rotation in the shaft will also allow a stronger grip with less effort.  Much as you might like that super tight grip on your little finger.  Some times bigger is better!" 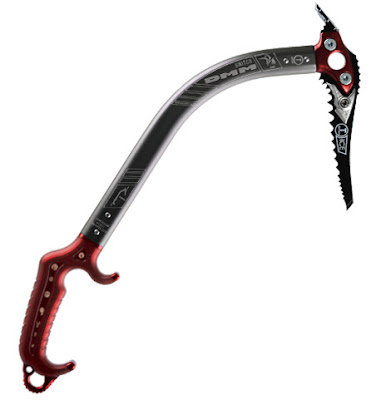 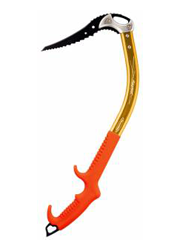 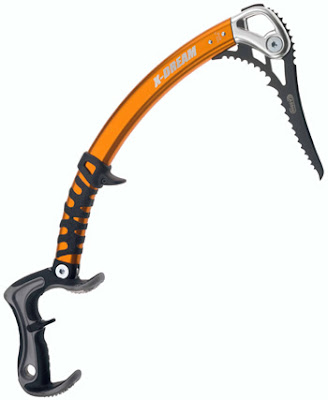 Camp X Dream
That is the modern stuff.  The idea of the tool having enough rotation in the hand to be useful is not new.  I didn't come up wiht this stuff by myself.  Just been around long enough to see how it has changed climbing and always made it easier if the reasoning is better understood.
Here are the ferrule and spike from the classic Chouinard Bamboo Piolet (top) and the second more technical tool, the Chouinard Bamboo Zero (bottom).  The Zero has been taped for a better grip. 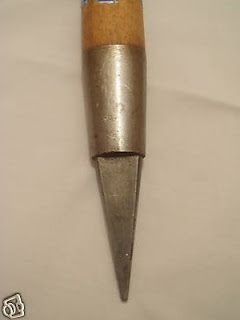 The Ferrule on each tool is the same size.  The spike on the Zero is almost exactly a 1/2 size replica of the original Piolets.  6cm cut down to 3cm.  One reason....and that was to allow better rotation in the hand.  Which resulted in easier sticks and less effort.
Some even went to the extreme and prefered no spike for their own water fall tools. 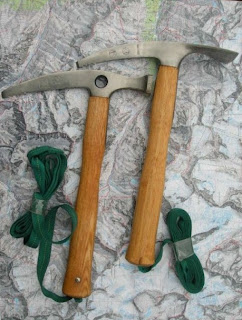 not related, but you might be able to help.

what do you recommend?

I use the static cord to save weight.

I am considering using a 5.5 mm tech cord, and perhaps rapping just on the climbing rope, and using the tech cord just to pull the rope down.

Interesting post Dane. What are your thoughts on the older orange Fusion with regards to this?

for year i have messed around with single rope and tag line or twin ropes or double ropes. i have now finally settled on double ropes are the best. the weight saving or easy of use on having a single 9.5mm and a 6mm tag line is just not worth it. i currently use 2 x 8mm double ropes for everything. if one gets cut by accident you can still get away taking a leader fail on the other. i am interested in finding out what the weight per meter is for the new edelrid corbie, anyone know.

Hi Julian,
The original Fusion has one of the steepest pick angles around. 2 degrees more than the current Fusion2 iirc. It is a lot. I haven't climbing on them much but seem to remember the rotation being pretty good. Trick is to match the pick angle (steep as possible) for good hooking and still have very good rotation in the grip and not too steep for that 1st swing stick on decent ice. Chouinard thought he had that angle figured out in the late '60s. Easier said than done. As those that have tried to copy the Nomic unsuccessfully have found.

But even Petzl imo wasn't fully aware of why the Nomic works so well. We as climbers harranged them into adding a "spike" and eneded up limiting the rotation of the tool by doing so. Which is why guys are now cutting off the blade on the Nomic and Ergo to regain some of that rotation and get better 1st time sticks on ice.

The best tools are always going to be a balance in so many ways. Always have been for any "hand" tool.

Rated as a twin, dbl and the "thinnest" single in the world currently. Corbie is 8.6mm and 51g/m, and rated as a 5 fall single.