Gear on the 1st Ascent of the Eiger? 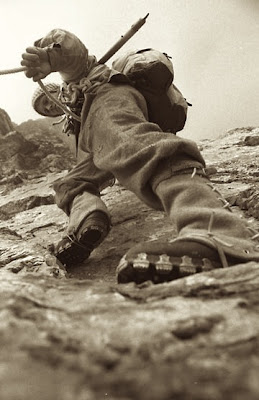 10 point crampons and tricounis!
Very skilled and hard men.
Best detail account of the original gear used on the Eiger I've seen sin the "White Spider".  I knew about the 12 point crampons of Harrer but the rumor of a "short" axe  may be not unfounded.  A "short axe" in 1938 could have been anything under 95cm. 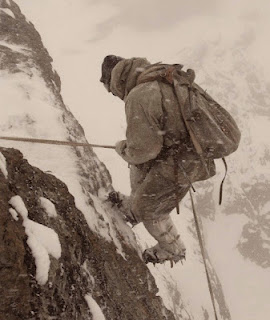 No question this axe is closer to a 65/70cm than 100cm.
I do not know if the photo above are from the actual 1st ascent. 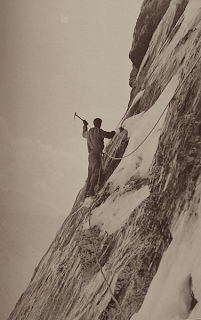 Kasparek on the Hinterstoisser
with what looks to be a short North Wall hammer on the 1st ascent. 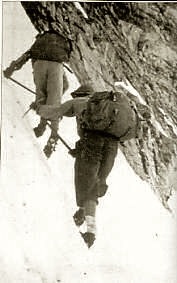 Heckmair and Vörg. Perfect French technique of "ax anchor" using what could easily be 70cm. axes 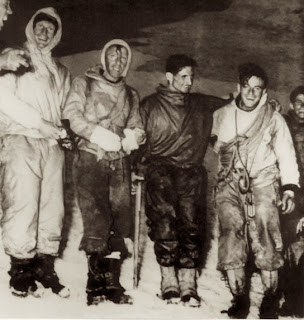 Heckmair and crew with him holding his axe after the 1st ascent.
Heckmair was not a tall man and my thought is that axe can't be more than 70cm.
As a modern comparison, Jeff Lowe and Mike Weiss used 70cm Chouinard Piolets as there primary tools on the 1st Ascent of Bridalveil falls.
"The most experienced mountaineer in the group (Heckmair, Ludwig Vörg, Heinrich Harrer and Fritz Kasparek), Heckmair led the most difficult pitches in the ascent, aided by the extensive kit (including new 12-point crampons) that he and Vörg had purchased using sponsors' money. Even as the most experienced climber, he still ran into several problems on the North Face of the Eiger, such as when he slipped whilst climbing out of the exit cracks. Luckily, Ludwig Vörg caught him by his feet, piercing his hand on Heckmair's crampons as he did so."
From the Eiger ascent:


"The same day Kasparek and Harrer ascension began leaving the two Germans at the base of the wall. After several hours of climbing reach the Rote Fluh and Hinterstoisser Crossing, which easily crossed by fixed ropes had left a few weeks before other climbers. Take a snack at a bivouac conditioning called "Swallow's Nest", where 40m rope stop by if you must back out there. A lesson learned from the misfortune of Toni Kurz and his colleagues two years ago."
"The next morning, July 22, Second face the Snowfield, and here Harrer no longer fit doubts: he made ​​a big mistake by not wearing crampons. Fritz Kasparek is forced into an excess of grief and effort to go to Harrer carving steps can follow. And so, slowly move up through the frozen snow diagonal Right to Left."
"When you are about to finish the lengthy Second Snowfield, something leaves them amazed. Behind them two climbers are reaching them at a rate they believe they will run. In seconds they reach. To his surprise are Heckmair and Vörg, which come climbing at a stretch from the base of the wall. As Harrer himself wrote: "... wearing their 12-point crampons, and I, with my boots winged fly (tricounis), I am out of place ...". The Germans advance and come to a head. From that time, fit the ascent and continue climbing 4 more or less together."


Photos and comments courtesy of:

FYI curved picks also existed back then. They weren't used on that climb but were around long before Yvon was a glint in his parent's eyes.

Curved picks were at least known for the Germans. The advantages just not obvious to everyone else at the time and may not to all that were using them.

I heard stories for the last 40 years about Heckmeir axe, that it was short and a drooped pick. Never seen a picture to prove it either way. Now I know it was a "short" axe. I'm not so sure what was actually used on the 1st ascent but intend to keep looking.