Ski-Mo and the Reality of Chamonix

This is a re post from just after my last visit to Chamonix. 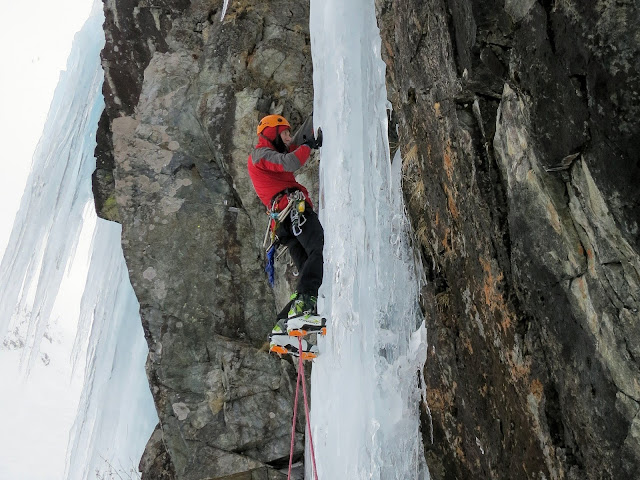 Jeff Street pulling some respectable local ice in his own TLTs,  winter 2012.

One thing that became glaringly obvious to me in Chamonix was..to climb there in winter you need to ski. And not just get by skiing but really ski. Walk like you ski and ski like you walk kind of skiing.

I keep up on Colin's blog. Paid attention to but didn't really clue in on the skiing. I figured, "Chamonix...when I couldn't climb, I'd ski". How bad can it be to be me ;-)

I've spent months at a time on skis, with a pack, a bomb or even a full size grain shovel. But I haven't been into skiing for a while now.

This blog started with a totally different title. I had intended the comments to high light some of the newest gear available for BC skiing. But the truth is skiing is just another skill, like belaying or using an ice axe that anyone that really wants to climb mountains needs to know. The Europeans have known that from the beginning. Their environment demands it. Two major dangers in the mountain snow pack, avalanche and crevasses. Sure you can climb without skiing. But you'll never be an Alpinist.

My first real AT boots were a pair of plastic Trappeurs with a Vibram sole. Not the best sole for a decent release in a DH binding of that era. (circa 1980) My skis were 190cm Rossignol Alp 3000. Fat, wide and short for the day. Loved those skis. But not the panache or speed of the 207 SMs, just more fun generally. Only the AT binding set ups kept them from being a amazing bit of gear. To be honest one of my reasons for the lack of excitement in skiing the last decade or so was the lack of gear that was up to the technology available.

I still hadn't seen anything to impress me for lwt mtn travel past Ned Gillete's Epoke 900s and 50mm bindings. We used that gear up to 14K on Denali for over a decade. Great for mileage...not so good on the down hill. But still way better than walking. Easier to carry the climbing boots than ski in them.

So after skiing for a month and then doing the high traverse off the GM and over to the north face of le Droites in my Spantiks and a pair 180cm of BD Aspects I was well aware of the limitations of my skill and my gear that day. Embarrassing so...and imo dangerous.

I am seldom intimidated on a pair of skis or by terrain. Kinda goes with the the knucklehead idea of "water ice..how hard can it be?" That morning I came to the conclusion one could be easily killed just getting to a climb in Chamonix. It as the first time that the thought had occurred to me after all the talk and previous incidents and the heartfelt discussions. This while everyone else in the basin that morning whipped by me on AT boots and generally shorter skis. By the time I got to the face any notion of actually climbing (it or anything else) was drained away by each patch of bare glacier ice traverse, one kick turn and each open crevasse at a time. Places most sane people would be roped up on. But no one ropes up in Chamonix for the "normal" runs. And this is a ski run commonly skied by locals or guided for the tourists. Tourists like me..

The thought of actually climbing in AT boots (which I have detested for several reasons) at that point seemed like a reasonable and much healthier option if you didn't first end up in the bottom of a crevasse just getting there. (to be fair way fewer rescues in the Argentiere than the Vallee Blanche it that is any consolation)

I had great beta and a plan for the climb. Only the approach and decent were stopping me. When I asked one of my acquaintances their suggestion after having just done the route again for the umpteenth time...the only suggestion offered was "take skis up and over".

Ya, I was fooked at that point. Out of psyche, out of time and out of my league.
I have never been stopped on a climb because of my gear selection. But I have questioned my own choice in gear and what I could have done better while on route many times. I prefer not to do that on climbs I suspect will be challenge enough with out extra weight on my back and some funky boots to climb in.

More to come on this subject but now you know why I have been looking at the AT ski blogs more closely.  Right now I headed out to go bc skiing for the day. A renewed passion.

Here is an idea and the gear I eventually will be using. (and I'd bet alpine climbing and skiing does as well) 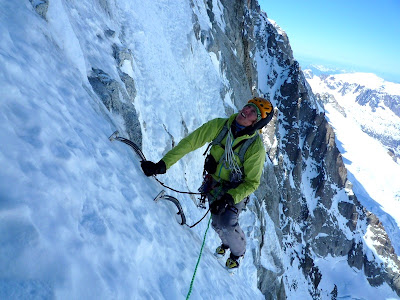 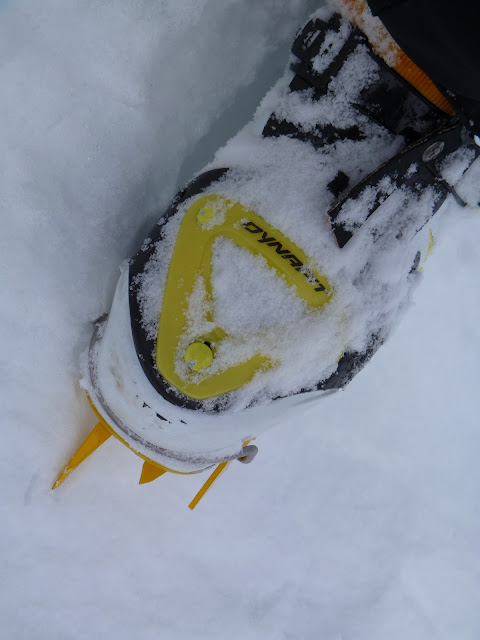 Since that original blog back in April of 2011, I have spent a lot of time in a TLT5 on alpine and water ice.  It has become one of my favorite ice boots.
The G20s are brand new however :) 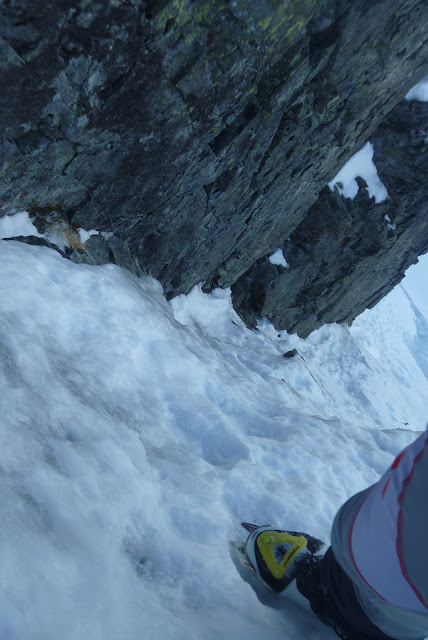 First, very excited to have this series continue. Second, can you outline what you've learned about climbing in the TLT5's? (For example, locked, unlocked or unlocked-but-closed)

No clue what everyone else is doing but I just unlatch the upper buckle. The boots fit me well enough I can climb pretty hard for me with all the buckles undone. But it is better that the lower buckle is latched just not super tight. Dynafit Movement pants work great for this. But I also use some Paradox or bike tights to good effect as well while climbing. Anything that stretches and holds the buckle and cuff out of the way...way easier than it sounds or you might think. Better yet for climbing any decent soft shell pant (mine are Patagonia or Arcteryx) seems to work perfectly with the TLT and the upper buckle open works as well too.

Kind of the same question as Eric, but do you climb with the tongues in?

Never thought to write it all down previous but will in detail on a seperate post. I'm in the TLT P and don't use the tongue or power strap for skiing the vast majority of time.

I also spent some time skiing and climbing in the TLT Mountain and did the same. But found I prefered the tongue in that boot for skiing on anything but my smallest skis. And liked the TLP P's Palau liner better in either shell. It is warmer and lighter.

Ditching the power strap and tongue makes for a lighter boot and one easier to convert from skinning to skiing or skinning to climbing.

About the buckle and pants, check this out:

Wow, something really nice about going to a blog and having another reader link to my website in the comments section. Nice to know at least a handful of folks are listening. Cool.

I'm with you, Dane. The TLT 5P is the shiznit for most ice and technical stuff short of really hard mixed. I'm too old for that shit anyway. I roll no tongues and no strap. They ended up in the garbage two seasons ago. Took off the training wheels then. My other partners all do the same in Aliens now.

I have a pair of Sportiva Spitfires coming. I'll report back on that soon.

Hey Brian, thanks for dropping by. Let me know if you can get a crampon on the La Sportivas. Bummer...here as I just tried on the Strato and Spitfire and couldn't find a combo I;d use on technical ice. Great tip on the seam grip BTW :) Are you going to be in Golden next month?

friends don't let friends... was it your blog where I read about the BD stainless horizontals just snapping at the secondaries? Do you have any idea what ever became of that issue? Sportivas new tech boot...that makes me pause and daydream - if only they didn't cost more than my first car.

Hey Olin, sorry about the wait. BD horizontals? I keep getting reports of them cracking and or breaking on occasion. Same break, in the same place.