In many ways things have changed little in the skills required to climb steep ice for the last 33 years or more.

Will Gadd recently published a timely commentary on his blog that is worth a read.
http://willgadd.com/x-vs-t-why-the-old-x-technique-is-inferior/

Here is a similar comment from two years ago trying to "drive home" the same point.  :)

I added this to Will's web site to give credit where it is really do.

"Good stuff as always Will. Just one clarification I think might be due.. Your countrymen, John Lauchlan and crew at Yamnuska Mtn school were teaching the “A” technique back in the fall/winter of 1980 when I showed up there. “A” likely a better description than a “T” for body position. John’s term BTW not mine and how he taught it indoors on a chalk board and outdoors on the ice. My take at the time was John and Dwayne adopted the same technique early and just furthered the idea in their season in the alps. That crew, Albi Sole, Dwayne Congdon, James Blench, Gregg Cronn among others at least tried to climb with and teach the "A" technique.   It was an obvious improvement over the "X".   Much easier to do now, as you know, using leashless tools."

“In the summer of 1980, with Dwayne Congdon, he represented Canada at the Rassemblement International, a bi-annual event held in Chamonix, France, that attracts two of the best climbers from each country. John and Dwayne succeeded in making the third ascent of the MacIntyre/Coulton Route on the Grande Jorasses, a route that had defeated many of Europe’s top alpinists. John went on to climb the North Face of Les Droites and to solo the Gabbaroux Couloir on Mt Blanc. (among others) In Canada, ice climbing was one of John’s main interests, and he led the movement towards new routes and bolder styles. His list of first ascents includes Takakkaw Falls, Pilsner Pillar, Slipsteam and Nemesis (the first free ascent).”

"Weeping Pillar and Nemesis were done prior to ’80 and done free so I suspect they didn’t adopt much. But the “A” on perfect alpine Neve makes the technique a lot easier to adopt and then transfer that skill to steep water ice."

What follows is a sequence of photos on Grade 3 to 3+ water ice.  Small bulges of almost vertical but the majority of the ice is between 65 and 75 degrees.  Steep enough but also a great situation to really push your skill level in the A position and the most efficient use of a modern tool that offers two distinct grip positions.  In this case, the tool used is a current model of  BD Cobra but any of them (the newest 2 grip tools) will work.   Big thanks to Craig Pope here for making this blog post possible.

I have nothing to gain from this, so take it for what it is worth... If you are not climbing leashless on a modern tool designed to be leashless you are wasting energy.
I have done all this on a straight shafted bamboo axe as well.  And while possible to use these skills and the technique on any tool it is not nearly as efficient, safe or as fun with out the current leashless gear. 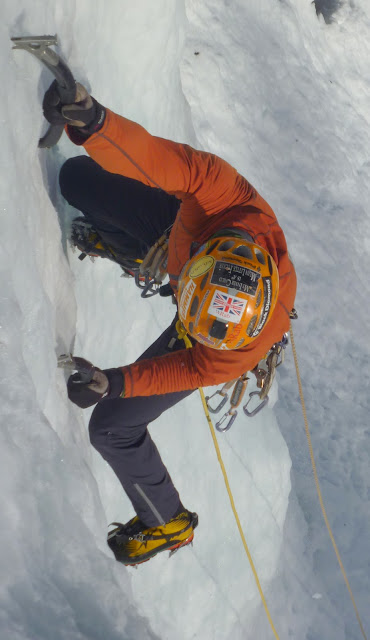 Classic example of using the second grip on the right tool and getting full extention off both tools.
Which in turns means fewer placements and less engery wasted. 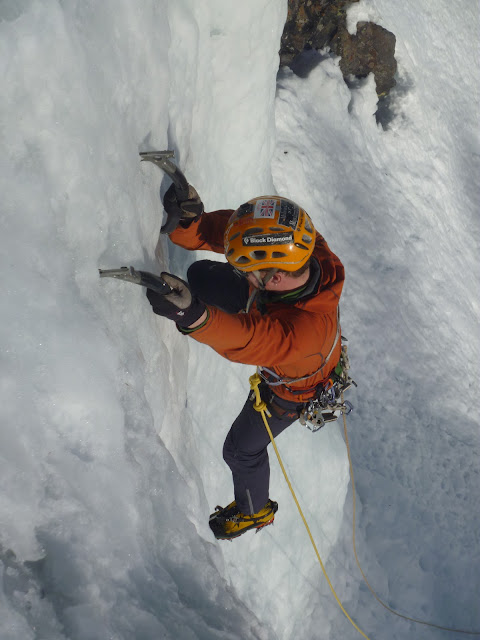 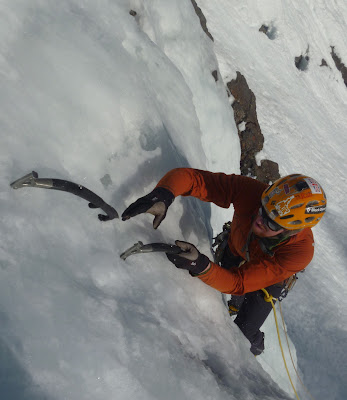 Changing grip position on the shaft after shaking out. 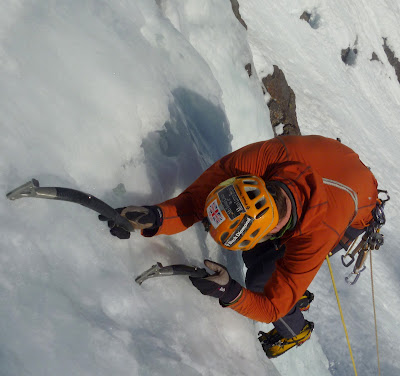 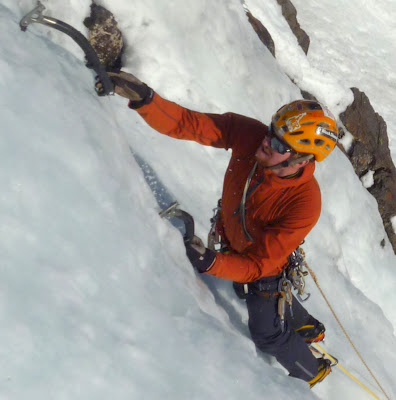 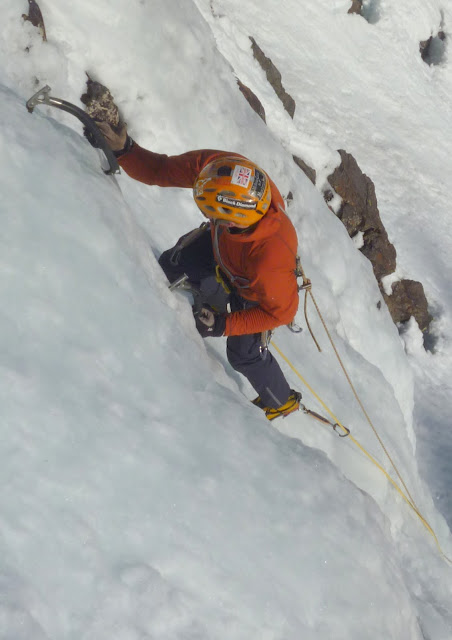 Note he has gone to the upper grip on the right hand to eliminate a placement. 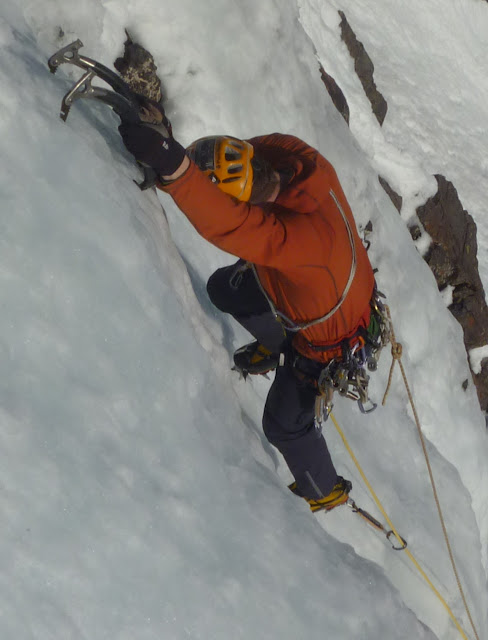 To pull over a small bulge his tools are closer than he would generally like.   Classic way to pull over a bulge.  Craig is using both tool grip positions to good effect. 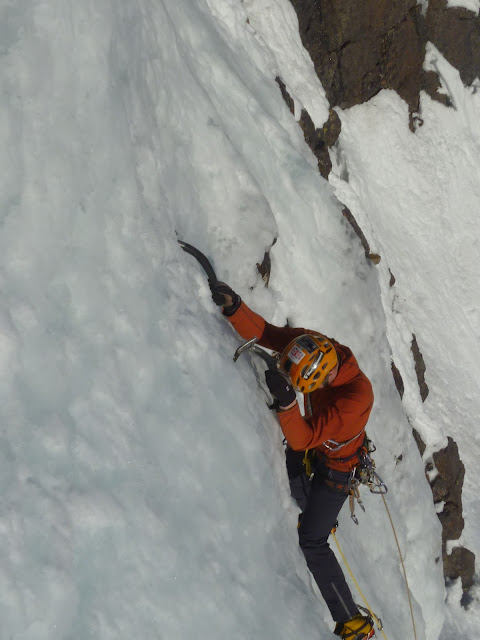 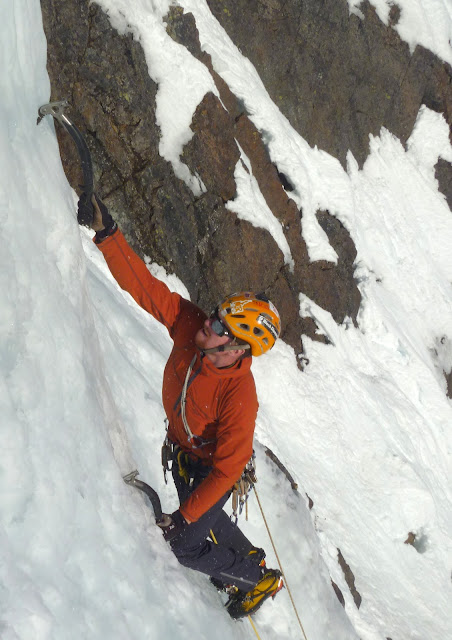 Easier ice and a BIG extension 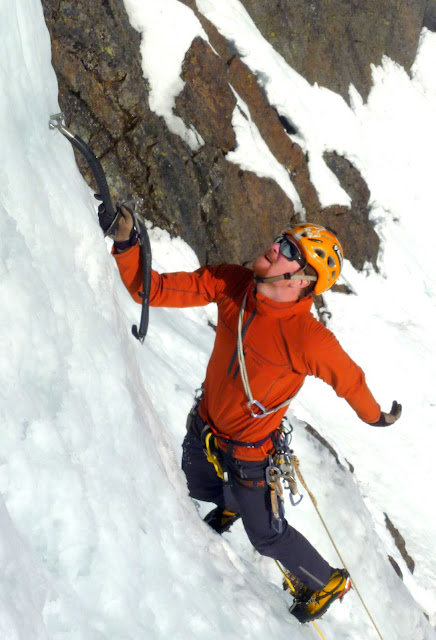 Always take advantage of any rest, drop your arms and shake.  It will keep you warmer and stronger. 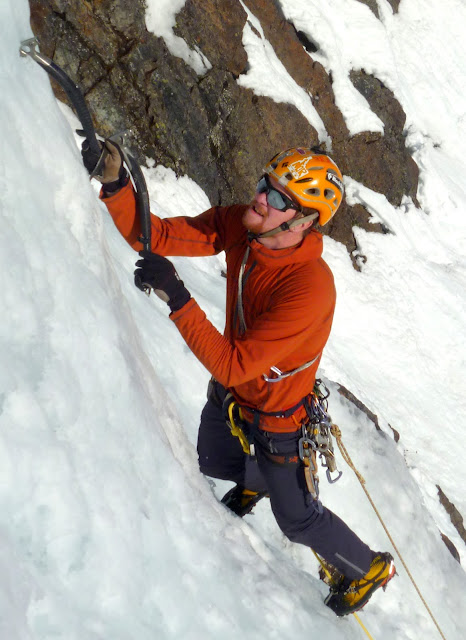 Easy "holster" of a tool (thumb hook)  and again, avoids a unneeded placement of your tool 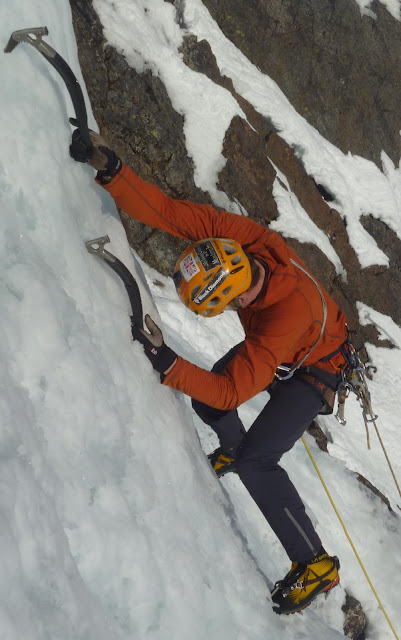 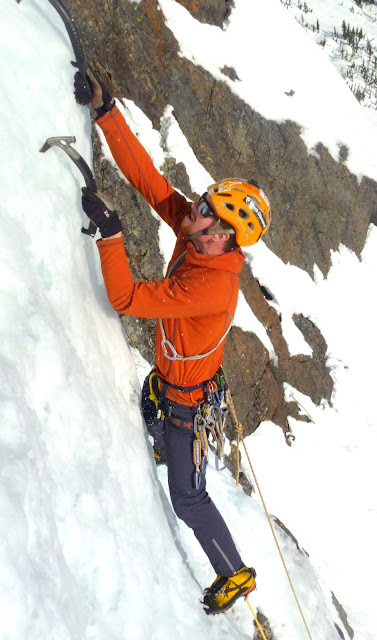 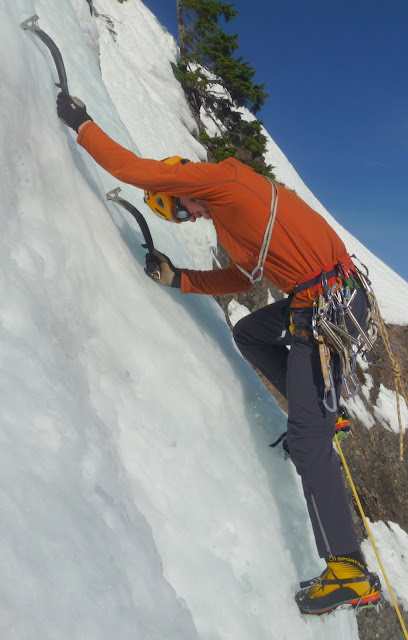 Bottom line?  The fewer times you swing on any given piece of ice the stronger you will be climbing.
Think, efficent use of the tool first, rest by getting off your arms when possible second. 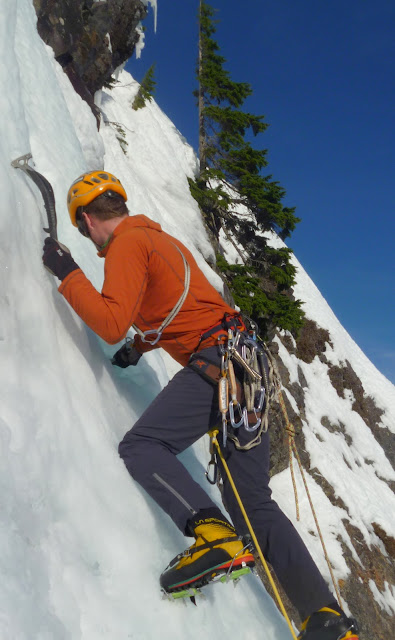 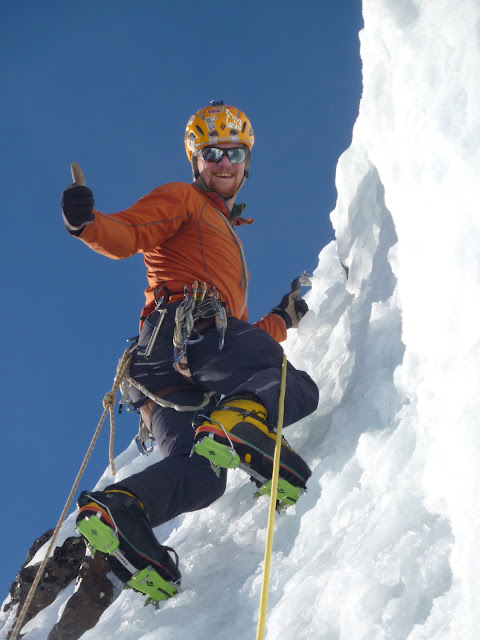 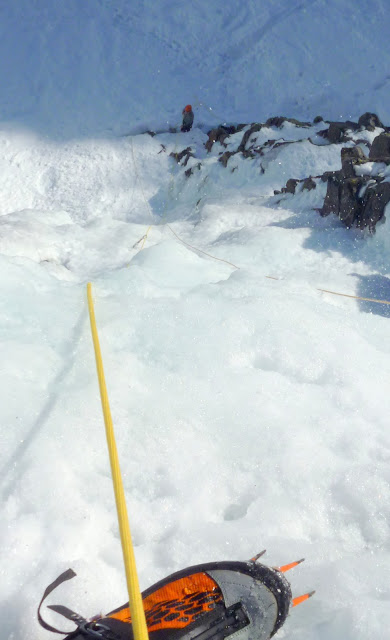 Lane at the belay below, from mid pitch, 100+ feet out.
Two videos linked below that hopefully will help.  One of Will on picked out, cold, hard (in texture), vertical ice.  More hooking than swing there to good effect.  And the other from Peak Mtn Guides.
&lt;iframe width="560" height="315" src="http://www.youtube.com/embed/rjMVSlQilKk" frameborder="0" allowfullscreen>&lt;/iframe>
&lt;iframe width="560" height="315" src="http://www.youtube.com/embed/X1AJS-hccXE" frameborder="0" allowfullscreen>&lt;/iframe>
In the second video from Peak Mtn Guides, my critic would be that a lot of effort is wasted by not driving the tool straight above the climber but instead is shown being driven off to the side and with straight hip angles.  It is more efficient to drive the tool at the apex of the triangle or top of the A,  and allow your hips to follow.
Posted by Dane at 12:33 PM

Hey Dane, first of all, kudos for putting this up! This should be required reading for novice ice climbers. Simple, short, and easy to follow. YES!

Something to add - could you comment on how deep the tools are in the ice? Just as important - I see local guides teach their clients they only need the first few teeth in the ice, but these pictures show the picks have been driven in to the shaft.

Hi Kevin, Sure. Craig was doing a nice job leading there. Just his style. It wasn't a show for the pictures. We are both big fans of not over driving your tools. But it depends on the ice. The ice when the pictures were taken was sun rotting while we were on it and sublaminating off the base rock.

A little spooky actually in bright sun on a warm day. So we were getting really good sticks and not holding back on the swing. A few teeth will do if you have hard ice and/or clean hooks like what Will is climbing on in his video.

But as an example I ripped a fully buried pick on my Nomic through 12 to 20" of almost vertical slush/ ice after it had been weighted. Bought shite me fancy draws to be honest. I caught myself only by pure luck. Happy I wasn't leading. Would have had to pay atention! Only had that happen twice prior in all the time I have ice climbed. I started paying attention after that!

All that happened a bit later while we were climbing in the shade and a bit higher up. So image how bad the ice shown was.

But that might give you an idea of why the tools are buried in the pictures. cheers!

this video shows clearly the moving higher up on the tool in every placement... any comments on that?

Looks good to me. I think the Grivel Force tools really encourage you to use the higher grip by not having any grip angle shift. It makes using the second grip very natural by comparison to soem others. The Dude can obviously climb as well :)

LOL fun with letters. I learnt A-frame (what you are calling T) vs H-frame (what you are calling X)! More about placement.. Instructors have told me to reach to nearly full extension (2m between tools, more efficient) while others have told me to keep movements fairly tight (tools about a tool-length apart vertically). Would be interested to hear your opinion. Great post.

How far you extend the placements depends on the ice and how steep it is. Nice to go 2m but seldom realistic other than on 60/70 degree neve. Get steeper and ice harder things change. The idea is to TRY to get a good extention and limit your need for placements. But no hard and fast rules other than "try".

These photos are good for beginners looking to level up. The intro course I took was very good, but it wasn't until I got to practice some outside the course that things started coming together.