Another critical look at Ice tools and Umbilicals 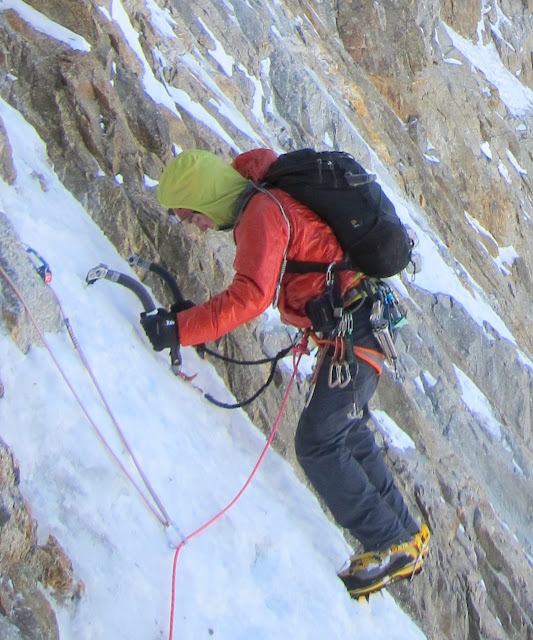 
I get the, "which ice tool and which umbilical,"  question at least a couple of times a week.

My 2 cent on the subject.

It is ridiculous, silly really. As in dumb, dumb and dumber.

Not the question or those asking, but the guys building this stuff.

Like crampons there needs to be a norm in the industry.  Best system yet I have seen? An incidentally the most fail proof system to date?

Petzl Nomic (or Ergo) with a Blue Ice Boa leash.  And I have climbed on most everything available.  From 30+ year old home made umbilicals to the first Grivel clip on versions to the latest versions from Grivel and BD.

Here is why I think the Nomic/ Boa combo should and could be the norm if the manufactures would simply *think* about the process for a minute.  Huge disservice to us not to IMO.

Hole in handle and full strength? Easy to do in any axe during production.  Check
Eliminates any  issues with dropped/disconnected biners. Check
Easy and quick on and off the tools.  Seconds in fact. Check
As strong and as simple as you want to make the nylon.  Check
Cheap to manufacture. Check

Grivel made the first commerical umbilicals I am aware of.  At some point early on they offered a wire gate biner with a really stiff gate as the attachment method.  Wire gate biners will not reliably stay attached to a fixed clip in point on a tool  They will eventually unlatch and lever off.  Common occurance now.

Grivel solved the problem quickly by adding a locking screw gate biner instead of the wire gate.
BD simply copied the earlier and faulty Grivel system.  Prone to failure from day one.  Stiffening the wire gate is not the answer.  Just a band aid actually.

I know of one fatal fall ice climbing last season where umbilicals were in use.  I've been told that on inspection after the fall one tool had disconnected entirely from the tool and both gates on the umbilicals were on the wrong side of the biner gate opening.

One has to wonder if a more reliable attachment system might have resulted in a shorter, more controlled initial fall, with  less tramatic results.

The current commercial umbilicals are not designed to hold a leader fall.  But everyone knows that is how they are being used.  And have been now for decades.  Insurance for the leader to avoid a potential fall and security so a tool isn't dropped.

Easy to solve this problem on any tool with a little redesign of the shaft.  Easy to up the strength on the umbilicals by ditching the "biner" of any sort and building from a better and stronger webbing.  There is a lot of room for improvement here with both the tool attachment point and the umbilicals themselves.

I've climbed on almost every modern tool.  And on every commercial umbilical since the early preproduction and production models from both Grivel and Black Diamond.  With the resulting minor failures as the umbilicals snapped off mid route on many of those combos.  It is just happen stance that I like the Nomic and have used he Blue Ice Boa leash.  I didn't plan this.  It was a first time ice climber (thanks Jim) that showed me a better and cleaner way to lash up the Nomic with a BOA leash.  Not the technique I was originally using

But there are lots of ways to do this and several decades of history behind it:

Then there is the "Best" way.

This is not an endorsement of "just" the Nomic or "just" the Boa leash.  It is only a statement on an "easy fix".  This is the umbilical style that will works well on that particular style attachment  point.  It is so simple.  Why isn't everyone doing it? 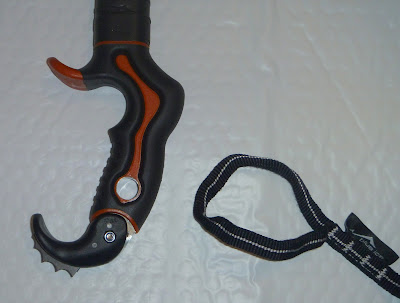 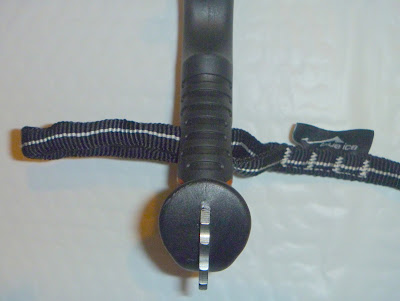 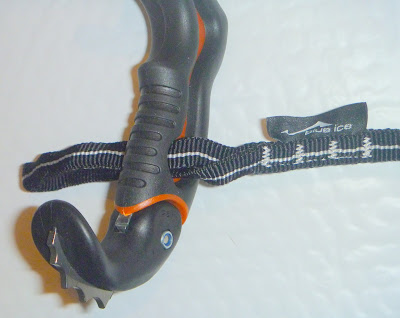 Same picture different angle, seconds are all that is required here 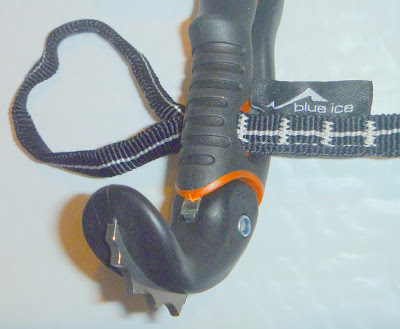 Pull the loop through and spread it 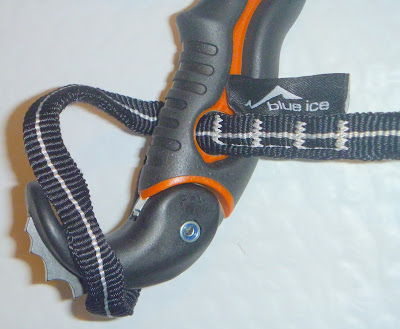 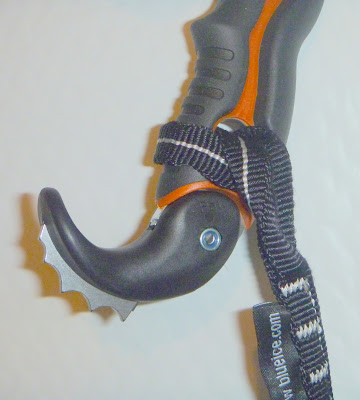 Pull the long side of the leash snug...you are done.  This tool is set up for a right hand to keep the webbing bulk to a minimum 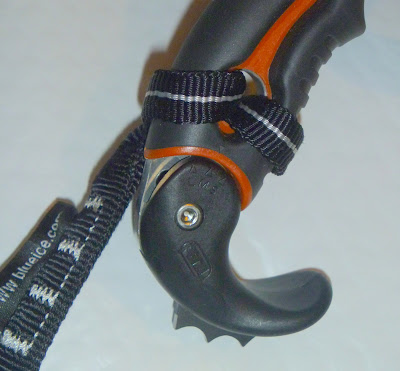 "Right hand" tool again, showing the "smooth" side of the Umbilical that the palm of your hand would go in. 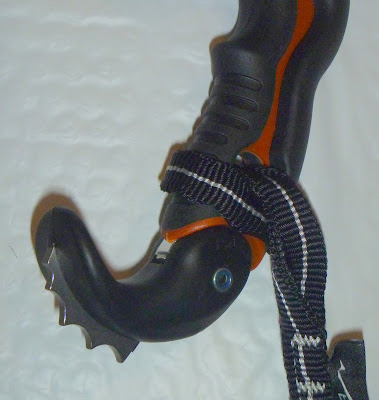 This shows the "bulk" side of the tool.  Not all that bulky, really. 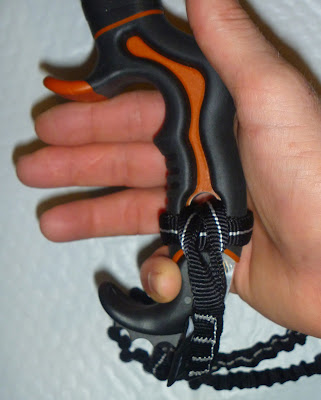 Easy on and off in just seconds even after being fully weighted.

Blue Ice Boa leash is currently sold out world wide.  Check your dealer's shelf in the EU.
None in North America at the moment.

Seriously, I couldn't make this stuff up!  (Thanks Charlie)
Check out the video below:

Nice picture. You got me a pair of the Boa's. I haven't yet used em - but I will try this connection approach on the cobras. It's a bit different because the hole is in the pick... thanks for the great pix though!

It seems like with other tools without a hole in the handle but rather a hole in the spike, the attachment method you show would be less secure, as the loop you girthhitched would only be around the spike and easily pop off

I wonder if that is even the best way to do things? I have noticed the UIAA Standards are pretty low on the leash testing standards of only 2kn. Perhaps they need to maybe make some full strength hole and then use some system of load limiters in the leashes? Interesting article!
www.earendeladventure.com

Really interesting and helpful post this Dane. Thanks a lot.

i guess my only thoughts with this set up and the nomic, is that by using the hole in the handle for the leash, makes the hole unavailable to clip to when safeguarding placing a screw, or super pumped on ice?

Neil Gresham wrote, "An interesting method to bridge the gap between leash-less and the lanyard method is simply to connect both axes together using a piece of cord or bungee approximately 1.5m in length." In that light, the climber can op to use a stronger, more dynamic cordage like a rabbit runner to connect the axes. Then clip that to a 'biner already clipped to short sling (girth hitched to your harnress) if things look sketchy. Not as light as the commercial tethers for sure but there's still the issue with the strength of the spike.

I was wondering if a light ferrata set used as umbilicals would work. Replace the ferrata carabiners with a light full strenght carabiners and using a lite kit with shock adsorber would be a safe system for 1) dont risk to lose the tools and 2) have some protection in case of fall due the dissipating effect of the kit.
Just an opinion....

Im running new Quarks (stripped down) with a BD Spinner, and the best option for me has been to tie some 4mm cord to the hole on the spike then clip the leash to that, this way the hole is free for me to clip my cows tail/safety (which is a 60cm sling tied to my belay loop with a locking biner to the other end) directly into axe for when I need a rest.

I know I'm late to this discussion, but speaking of Via Ferrata lanyards has anyone tried using a Petzl Scorpio? It's got a built in Load limiter, it's full strength and you could use a light biner (or cordage) to attach it to a tool.

I totally agree with the standardization though; it's crazy that in this day in age in this industry they're so behind on it.

There's an interesting article about headlamp burn time standardization over at outdoor gear lab that again highlights the shortcomings and disconnect between gear and it’s users.

Dane what's the best way to protect backpack gear loops while carrying ice tools? My DMM Apex have a serrated head and shred the loops. I cushion the head with packing and duct tape, but it's not the best way.

Big fan of duct tape myself :)