Dave on the Low5 in the cold smoke of the Brevent.  photo courtesy of Ross Hewitt


“I didn’t know La Sportiva made Ski’s, how are they?”

Seems to be something that I get asked a lot when I take MY Lo5’s out in Chamonix.

Up until last year I didn’t know they made ski’s either. Everyone knows them for their boots and we’ve all seen the ridiculously light Ski Boots sat in the shops looking very racey. But Ski’s? In an already vast market of ski’s you need to find a good neash and do it well to get anywhere and I’m happy to say that quality wise they are very good. 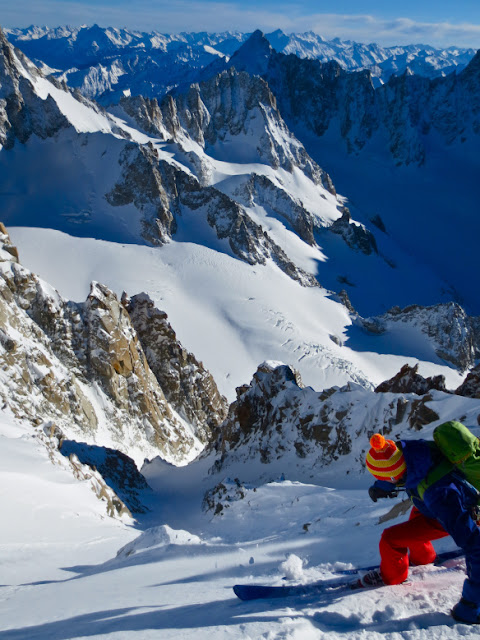 Let me first describe my skiing and what I look for. I live in Chamonix which is of course a haven for steep and technical descents which are primarily human powered with the exception of the ‘big pheriques’. Therefore there are two different days that I usually have in Cham. If there is fresh then the norm is to lap the Midi or the Grande Montet until I can’t stand. These days require big ski’s, stiff boots and a powerful approach to skiing. We don’t get that many days like that unfortunately. This brings me on to the other type of skiing we have where you head out with a bag full of what you think might be useful i.e ropes, poons, axe(s) skins and you head to either a pre-planned objective or and area where you think it might be good… For days like this you need a predictable, stable ski with good edge grip and enough float to get you through the 3 day old pow. They need to be stiff enough to plow the crud and crust and light enough that you can rinse out 1200m+ of vert and still have enough in you to ski back to town. Finding a Ski which does it all is tough I agree so compromise needs to be made however I think I might of found my perfect partner with the Lo5’s for days like these…..

Most of the people I ski with will run a 100m waisted ski as their touring ski. We all like to enjoy the down with big turns and airs and we don’t have time for mincy skiing on floppy Rando planks. We want to go deep into the massif in a day and ski out fast so we can get back to our homes to re-hydrate, refuel and plan for the next day. 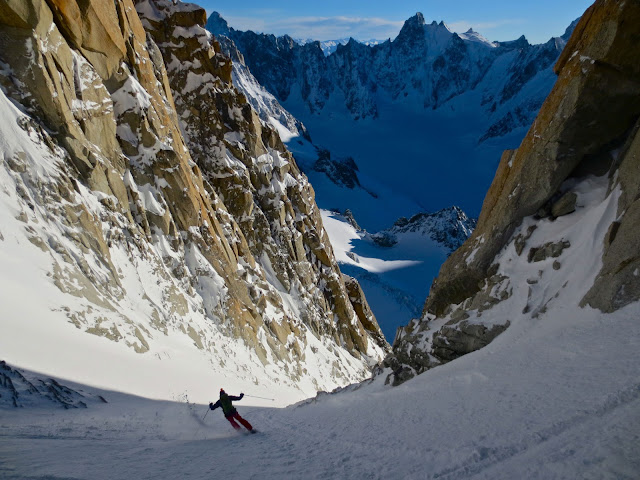 This past week in Cham I have exclusively skied on the La Sportiva Lo5 to give them a proper test. I was skiing for 4 days around work and here’s what I did. 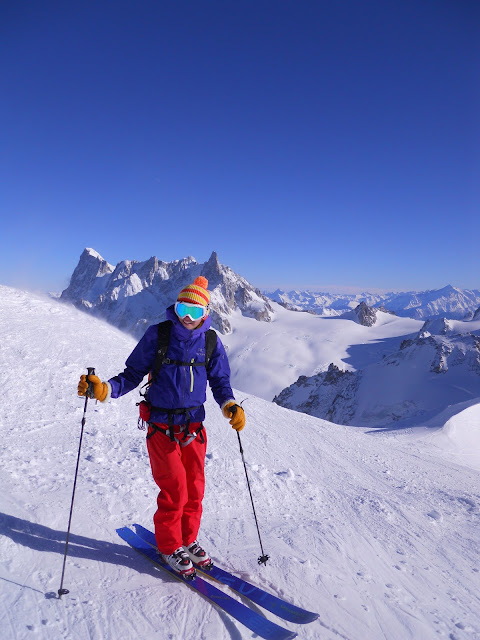 Day 1: Two laps of the Aiguille du midi via the Valley Blanche/Envers du plan. Deep, fresh powder and an icey, Bumpy track back to town. A good day- Perhaps better to have been on a bigger pow ski but still the Lo5’s put a smile on my face and gave me a good day out for sure. They handled the bumps very well and kept me on the straight and narrow (track).

Day 2: Y Couloir on the Aiguille d’Argentiere. Steep (up to 50 degrees) decent in perfect cold snow. 1200m up and 2650m down in a day up to 3900m. I felt super confortable and secure on the Lo5’s putting in jump turns in the steep and narrow couloir and they felt light on my back during the hike up. Skiing the Grande Montet homerun (red run) in the failing/flat light was a breeze. They handled very well on the piste with good carve ability.

Day 3: Col hopping in the Aiguille Rouge. We wanted to ski a steep north facing couloir but ended up skiing a sloppy south face with variable snow and some fun drops to get through the rock bands. The ski’s handled all the messy snow well. They delt with the cunderballs, debris, powder, semi corn and icey track in equal measures and again I appreciated the low weight as we spent most of the day going up.

Day 4: South Couloir of the Aiguille De l’Eboulement. 1500m of vert in a day and 2250m down in variable snow, which was mostly breakable crust. Tricky skiing for sure and not really that pleasant. Only a massive reverse camber ski would have been fun on the way down. I still felt glad to have the Lo5’s on my feet as they were predictable to turn on the steeps and the early tip rise helped no end in the crust.

All in all a pretty full on week in Cham. All kinds of snow experienced and I’m still loving the Lo5’s as my touring ski. As a light and reliable SKIMO tool these pretty much hit the nail on the head and would be a good companion to any Climber or Ski Mountaineers/ Tourer who needs a reliable and predictable yet fun ski to rip the resort, pow, steeps and bumps with ease.

Other info:
I mounted My Plum Guides 1cm forward from the line with quiver killer inserts. I have the 178 and my set up is exactly 4Kg in total. 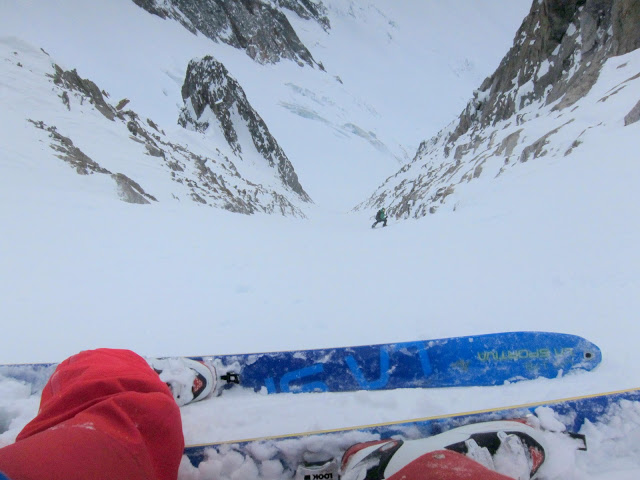 Dave and my buddy Jerry, a ski patroler in Montana, have been ripping and raving on the Lo5s this season.

Jerry's comments on the Lo5.

Dane -
Snow here has been so thin I have only skied them once (but am going for three days starting saturday). I took them up to Bridger on a day with 6-8 inches of very cold powder (@0-10F) and a firm base. Skied bumps, pow, chop, nd a few rocks. Was skiing with a former US Team member and his son so we were mostly hauling ass.

I didn't know when I ordered these that they were the same dimensions as  my 165 Kilowatts (the sportivas are 178) so I have a good comparison although the BDs are around five years old. Both have dynafits mounted.

My first impression is that I now get it when they say the early rise skis seem short. These feel about the same as the BDs - not a bad thing except for steep bumps where a longer ski would be better. That sounds counterintuitive but this ski in a 188 would really smooth out the fore and aft. Even with a more traditional boot (I was skiing the green dynafit), you just can't get that tip to do much. Opposite on the powder and chop where  they require no effort. They are more fun than my Fischer Wateas at 114 at the waist. More control and feel. No issues on the packed and I could carve pretty easy with an upright over the feet stance (I ski a lot like Pierce and Arnold - not as well but standing pretty upright).

As a one quiver ski I think they would be fine if you kept them out of the firm bumps (did I mention these were really firm bumps). Since I have no interest in skiing that sort of terrain I would ski them every day at BS. Would like to try the 188s. I patrol on a big Dynastar Legend at 188 and really enjoy them and think the Low 5 in that length would be stellar especially at about a third the weight. I think the sidecut is the new standard for an all round ski and have no problem keeping an edge in firm spring snow.

I've never skied the DPS so can't say how them compare but based on talking with those that own them they either come with a lifetime supply of cocaine or are some of the best skiing boards out there. (DB sez:  Its true, the DPS do ski well ;-)    For me and how and where I like to ski the Lo5 is going to be fine. I spend more and more time in the BC taking tours and skiing open faces and tight chutes. This ski is going to replace my BDs, save weight, and give more float skinning and skiing - what's not to like?
J.

Here in the PNW, on Cascade Cement much of the time I have been using the Hi5 for the last two seasons going on three now.  I still haven't found anything to replace them and I have a a few more pairs of  skis now.  So it isn't without trying.   More on the Hi5 here:

Thanks for the informative and nice review!
I tend do buy this ski. I wonder if the ski isn't to heavy comparing with other skis on the market. Or is this 'extra' weight the key to more security in such steep terrain?

Hang5 is a little heavy by the standard of this season. But also skis better than anything I have yet used short of a real down hill ski. I took 2 skis to Las Lenas in August..a new Denali and the Hang5.