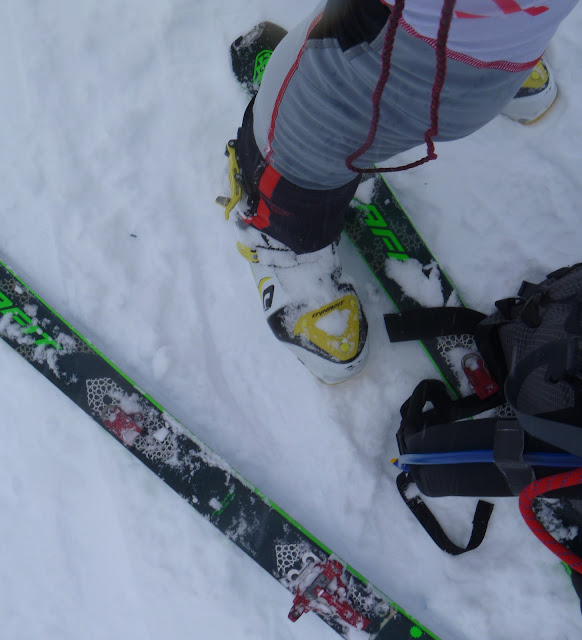 On Saturday I was lucky enough to do one of the many local BC tours.  The route has 4600' of climbing and is just over 13k long.  I hooked up with one of the local guide serves here for the day to get an idea of what people around my area were using for gear.    I thought  it would be fun to ski with a new group and see some terrain I hadn't yet.  Our day tour was close to Seattle and started, then returned to Alpental's upper parking lot.

The light was flat and we skied in and out of the cloud cover all day.  Never breaking into the sunshine.  I missed some of the really spectacular scenery I know surrounded us.  But that made some of the most interesting things I saw in our day's travel the gear being used.  I'd bet during the day I saw 30 or more BC skiers.  And it was a nasty, foggy and damp day for the most part.  Likely twice that many up there skiing that I didn't see.   Every single one of the I got close to were on skis over 100 to 110+ under foot.  Mostly well on the 110+ side.   And every one of the skiers in a 4 buckle boot.  At least in our party of 4 everyone was on a tech binding.  Dynafit being the easy winner here in the US at the moment.

But we were the exception not the rule.

The majority (if not all) of the skiers I saw in groups of let pass me in the track were in some type of plate bindings.  Marker and Fritschi were both well represented.

Boots? All four buckle. The lightest a Scarpa Mistral.  The most common seemed to be any version of a Black Diamond.  But I saw something from everyone in the boot business.   The TLTs or even lighter boots, however were missing in action.  That surprised me.  Even two winters ago, the first season for the TLT, the boots were shy mid winter but by April there were plenty of TLTs in the trams around Chamonix.  I also noted the hurry everyone was to get out of their 4 buckle boots at the end of the day.  The real hurry!  But then I was able to walk comfortably the first thirty minutes of hard pack trail on the way in.  While they skinned.  May be that was the difference in foot comfort at the end of the day.  May be it is the difference  on how one fits a down hill ski boot and the fit of a mountain boot used to climb and then ski in.  What are your priorities? 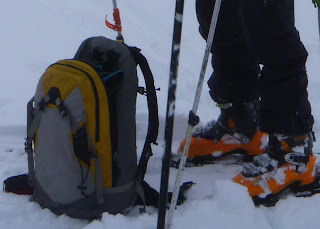 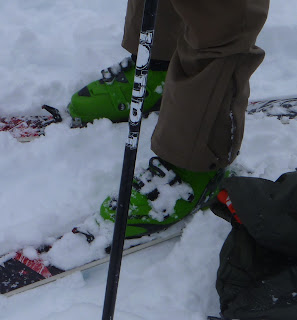 Skis? You name it and under 120 they were likely there. Saw more DPS skis in one day than I do at a lift area. 105s, 112s and 120s were represented. I have to admit my DPS Lotus 138s would have been really fun on the two biggest descents of the day. But they would simply be track pigs on the skin  even in the "Pure" form.

Poles?  The obvious adjustable touring pole was the most common.  But standard length ski poles were there as well.  I use full on, and long, xc poles.

My guess is there was only one pair of Lycra tights on the hill that day.  But to be fair the Movement pants are hard to obtain most of the year.  Lycra is not however.  If I weren't in the Movement pant I'd still be in something resembling Lycra.   While I played with my upper system the first half of the day, to finally get it right my pants and longs under them were simply superb beginning to end.

A fair percentage of skiers in one or the other of air bag systems.  That one surprised me at $500 a pop or more likely twice that.  Have to wonder if those same folks bothered with an avalanche class as well.  It reminds me of the ski helmet fashion statement.  Great idea but would one ever think about not skiing that close to a tree or actually not skiing obvious avi terrain?  With 120 under foot?  Of course not.   I am still pondering that mental equation.

Not a "heavy" set up by comparison to what I saw on Saturday but an idea in the differences of "heavy" and "light".   Add in the packs, what is in the pack and your choices in clothing and things change even more.


I know the difference between skiing "combat boots" and the TLTs.  Even the carbon cuffed Performance version.  And no doubt a big rocked ski under foot makes child's play of difficult conditions and good conditions pure joy.  I only felt at a real disadvantage once on this tour.   And that was at the last hour of the effort in the exit  gully.  I would have preferred a wider ski for the snow conditions.  But  a fresh set of legs would have made short work of it compared to a fat ski.  Money can buy the fat ski.  The fresh legs will take more time.

By comparison though...no one in our party was immune to the tired legs.  My legs were just 7#s less tired for the effort.  Thankfully.

The last decent gully in better conditions than what we had.

Great idea for a post. I've always wanted to stand to the side of the booter on Teton Pass and take pictures of the sweaty Gortex crowd and do some sort of commentary about clothing selection.

I got my second pair of Movement Pants the other day. Found them, full price, mind you, on some random internet site. I'm keeping my others together with sewing and Seam Grip. I have some mods to share soon.

Got out on maybe my new favorite ski last night. We finally got a decent dump up here and I took my fresh-out-of-the-box Sportiva Lo5 in a 168cm out for a 2 hour shake down. Love it so far. I think it's gonna put the Broad Peak to rest until it corns up. Not as light as the Manaslu but more side cut and a straight tail so I think I'm gonna like them more on the winter chalk. Stay tuned.

Ha, ha...the only reason I was letting anyone pass me on the track Brain was 'cuz I am so slow. I know that is not your speed!

Dave's been ripping on the Lo5 and loves them on your kind of terrain. His reviews here show the terrain. I have been hunting a 176 DPS 99 Pure as my mid winter Broad Peak replacement. If that doesn't happen I may go to the Lo5 as well.