It is all the same.. 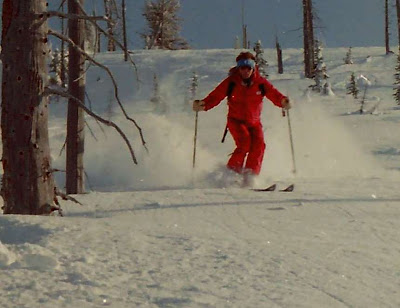 When I was a kid a few of us that had skied together started climbing.  Almost immediately that next spring as the snow melted out higher and higher the question came up, "are we now climbers or skiers"?  I remember having the discussion, likely over a coke and pizza, not beer,  more than once.  Geeze we were young! 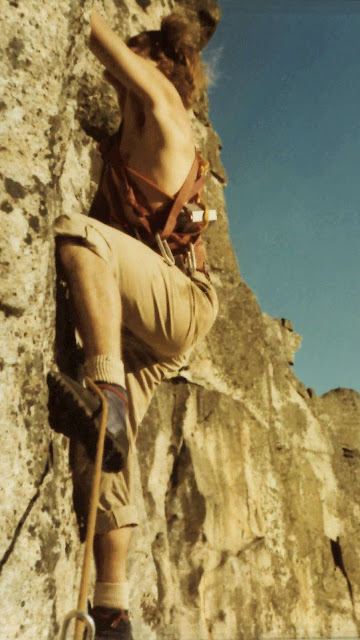 Pretty naive discussion then, but it seemed so serious at the time.  Funny I would have a similar discussion just recently.  Just not quite as definitive but just as serious.

I don't look at climbing or skiing (at least back country skiing) any different these days.  If you are a kid growing up in Chamonix (lucky kid) or other real mtn towns around the world and have the opportunity to get out likely you won't look at them as separate sports either.  More of a life style.  You ski to climb and you climb to ski, the activity is  simply defined by the season you are in.  Snow boarders of course have gone to split boards and own ice axes for self arrest.  It is just semantics really.  One way or the other you need to ski to get around in the mountains 12 months of the year.

Make the wrong choice and any of these activities can easily get you killed.

Think about it, all the same skills apply in any mountain environment.  And in general it is your brain, and actually turning it on, then listening to it, not the gear, that keeps you out of trouble.

So what is really fun for me is to take specialised gear that might be considered only good for one sport and mix and match it to my benefit and use it in the arena I choose.

Three items come to mind off hand that I have wanted to write a little about since I got them early last spring.  But haven't yet.  There are others I have talked about previous and will again.  And more yet that I'll give you a heads up on as I have time this spring.

The Dynafit TLT P ski boot is a great example of cross over gear.  I written a lot about this boot.  They say the new version the TLT6 will be even better.  I let you know when mine show up.  I'm a little leery that they "are a better boot".  Anyone with wider feet will be sure to be happier!

The TLT 5 in any version is a good ice climbing boot and incredible ski boots.  Easy to walk in and good enough to actually run in if required.  Warm enough for most any mtn environment.  As is, they have been to the summit of Denali many times now with the P's Palau liner.  The "almost" perfect mtn boot.  Damn close if you live in Chamonix or Jackson. 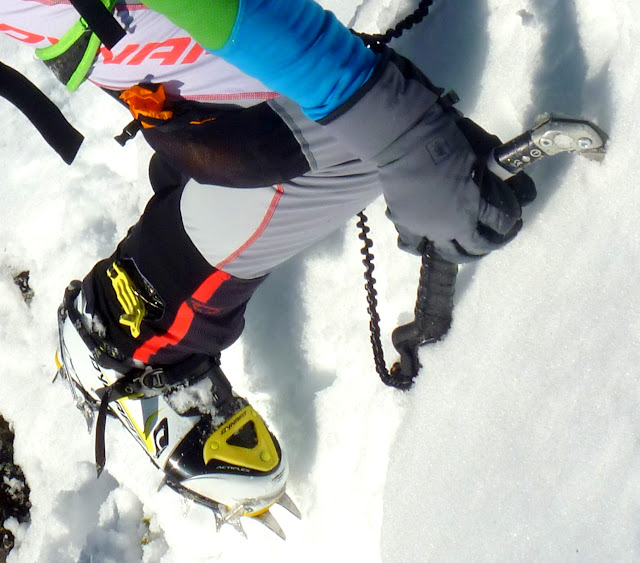 Yes, it is true, I am risking life and limb betting on not having another BD stainless failure! But they fit my TLTs very well, so worth the risk on occasion if you check them for cracks constantly.  I've pulled the bot plates so I can do that easier.  While you are looking for cracks check out the net pocket located at my knee with the bright orange Flash Anorak stuffed in.
The second piece of kit I really like and many might shun is the Dynafit Movement pant.  Lyra in part, snug fitting.  A built in stirrup and reinforced gaiter to keep skis from chopping the pant up.  Snug on the lower leg so crampons won't snag them and the gaiter material is tough enough to ward off the errant crampon as well.  Handy net side pocket the right knee.  Incredibly well placed and useful in fact!  And a middle of the back, "energy pocket" plus a zippered right hand pocket as well.  By far my favorite pair of pants to BC ski in or climb the volcano's in the summer.  Great weight, plenty of stretch and generally warmth enough alone.  Add your favorite longs as required to make them four season pants. 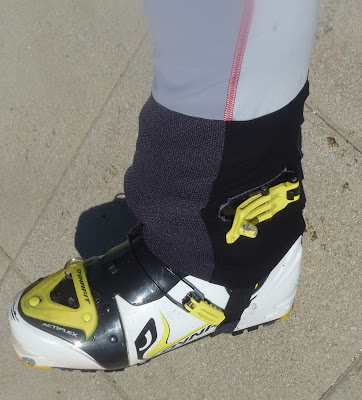 The Movement pant cut out for the TLT boot buckles.  They are intentionally made to accommodate any ski boot buckle system or just left uncut and a fully functional pant with a sewn in stirrup. 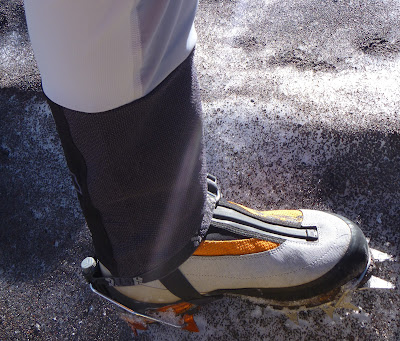 The Movement pant uncut using them for summer alpine climbing
White and grey are an unusual color combo until you are spending the day on a big glacier under a broiling sun.  Then it makes sense. 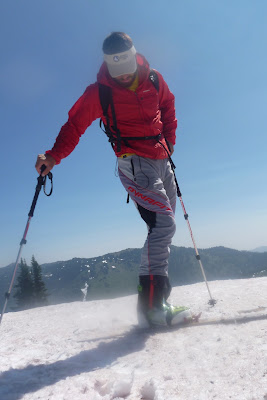 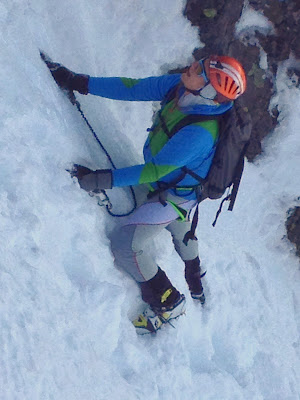 Climbing?  There really isn't much difference in the grand scheme of things
The last two pieces are from CAMP.  The Flash Anorak is simply brilliant imo.  It has no back.
"The Flash Anorak is unlike any other shell on the market—it has no back! This ultralight wind shell is carried in a pocket that attaches to the waist belt of any day pack. When things cool off, unfurl the anorak and pull it on without removing the pack. The shell is attached at the waist to prevent flapping and gives excellent protection from wind and even light drizzle. When no longer needed, simply take off the shell and stuff it back in the pocket without removing the pack. This is going to be a favorite with anyone moving fast in the high country." 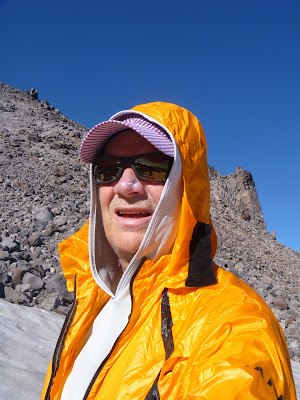 4oz of wind and rain protection 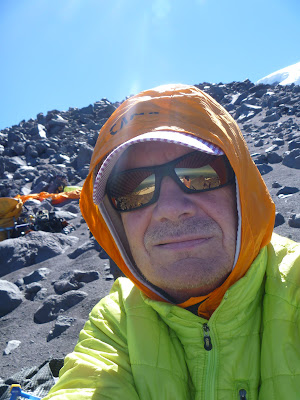 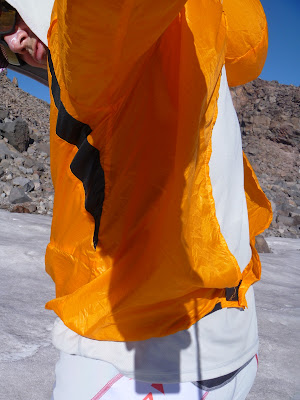 Because, if you look closely, the Flash Anorak has no back!

And in the bag it goes and around your waist.
Brilliant if you are carrying a pack anyway.
And you never have to take your pack off to put it on or take it off.
A lot of possibilities there if you open your mind. 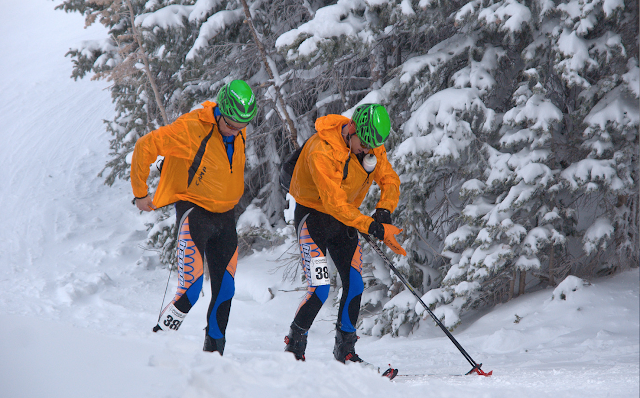 Don't let the uniforms scare you away from trying some really useful and unique gear!
And finally...the lightest (or at least one of the lightest currently) helmet in production?
That would be the CAMP SPEED.
"With a weight of 7.4 ounces, it's the lightest UIAA-certified helmet on the market. "  Jack turned me on to this one when he showed up in Chamonix in a the lid.  The color grew on me :)  But knowing Jack had changed brands and had been climbing in a Meteor prior (like me) did get my attention.
Petzl's new Sirocco helmet is claimed to be 5.8oz so it now owns "the lightest" bragging rights.
Take a Petzl Meteor and their newest Sirocco, throw them both in a blender and what you'd come up with is a CAMP SPEED.  The Speed is in good company with those two. 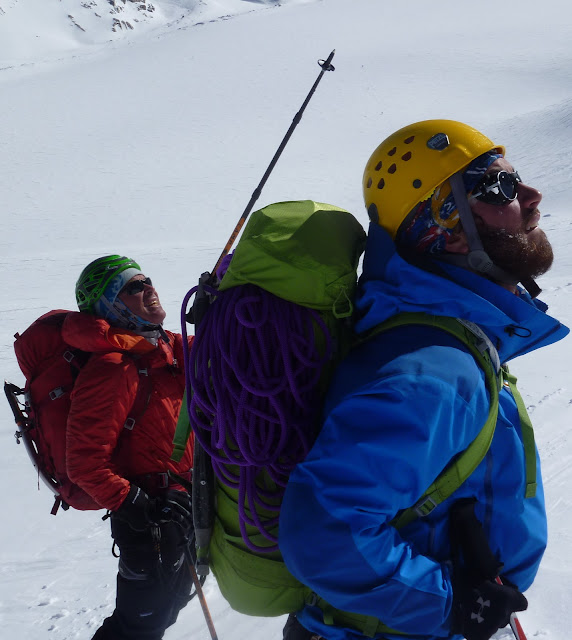 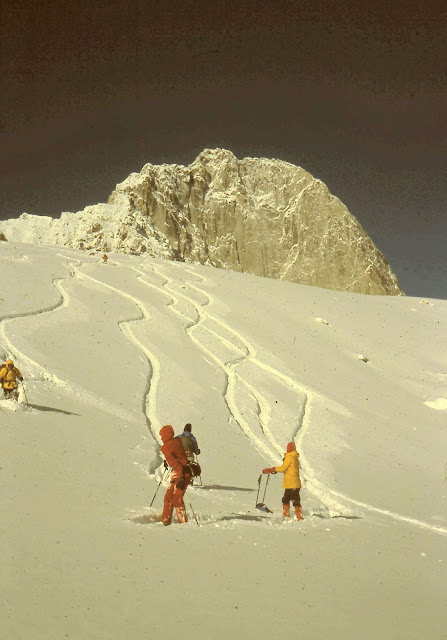 Guiding in some of the most incredible terrain and snow on the planet, the Bugaboos, 1985.   It is all the same....but you knew that already, didn't you?
Posted by Dane at 11:24 PM

The CAMP shell is truly interesting.

A couple of years ago, I took the first step towards making something I'd been thinking about for a while. I bought an XL Montane wind shirt--think Patagonia Houdini type garment--and intended to cut out the back, hem it, and attach the waist in back with some velcro. The idea was to have a very light shell--again, like a Houdini, which has been a go-to piece for a long time--that was small enough to carry on my belt or in a pocket, and able to put on and take off without removing my pack.

Looks like someone beat me to it. Saves me work I guess. I need to get one.

Hey PK, nice to see some one gets it :) The Flash is a fun rig to use.