Or, "Why do your new DRY and ICE picks suck on ice and mine don't?"

If you aren't having a problem ignore the rest of this.  For those that are hopefully this will be helpful.

Most of us loved the original Cascade picks on the Nomics and the older Quarks simply because they climbed water ice better than anything else available in factory form...then or now.

Petzl in all their engineering wisdom decided to better the first generation Nomic and we see now how that has gone.   I am a little amazed at just how far off their customer's requirements are in all of this.

Not like it will lose Petzl a large part of the market share but disappointing none the less that we have to fiddle with the gear to make it work as required.

I posted most of this info previous but people keep asking as the new tools arrive and get into climber's hands.

The first change is the new DRY and ICE picks have another couple of degrees in incline.  To put that into perspective there is generally 2 or less degrees of difference between the Fusion/Cobra/Viper?Reactor.

So in the grand scheme adding two more degrees on the Nomic is a BIG deal. 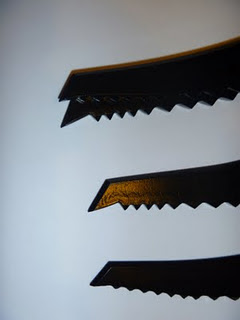 Top set of picks is the Cascade overlaid the new ICE
Middle is the new ICE Pick
Bottom is the older Cascade pick for a Nomic
But the change in tooth pattern on the ICE pick is what most will easily notice on the Nomic while on ice.

It isn't easy and you can't duplicate the Cascade exactly by carving up a ICE pick.  But you can get close enough to make them climb ice easier. 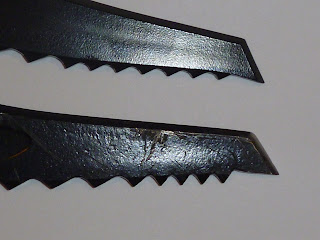 Again the Cascade is the upper pick.  The lower is a slightly modified ICE.
On this one I have only cut down the new elongated and heavy hooked front tooth. 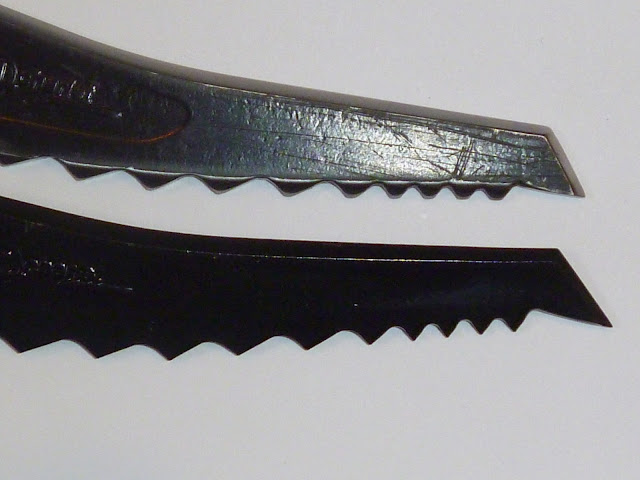 dbl click the picture here.  Top pick is a ICE I modified to climb pure ice easier and the lower on a brand new ICE, that is untouched.
As you can see to improve removing the pick on water ice the entire row of smaller front teeth ( I do the first 6 and taper into the higher ones) need to be cut down to the smaller proportions on the upper Cascade pick.
All of this is easily done with a hand file (I use a 10" Bastard file) in just a few minutes. 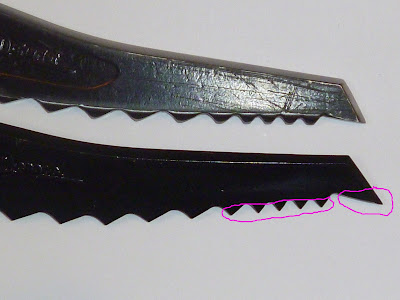 I have highlighted in the pink circles the new pick where I cut it down with a hand file. 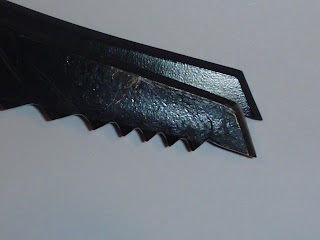 Here is another look at the added angle to the new picks.
Cascade pick is in back of this overlay and a new (slightly modified) ICE in front.
The new picks work great for mixed and dry tooling imo.  Not so much on pure ice.  I have saved a small stock of the older Cascade picks for pure ice just to save myself the hassle.  Hopefully Petzl will still be selling the original Cascade picks.
Posted by Dane at 10:03 PM

Any idea why Petzl made the change? Increased mixed performance?

Hi!
It may very well be that Petzl is relying on the feedback they get from their athlets a littel bit too much, because what is working for them may not work for the rest of use.I imagine that their sponsored climbers don´t get pumped leading WI5, they can hang from their tools littel bit longer than I can (or for that matter alot longer)and they don´t get scared with long runouts like I do.This guys are professional climbers, they train each and every day, so more or less they wil lead WI6-7 whit pretty much anything in their hands.
So when Petzl brings them a new picks or tools, they will test them, and if they say that everything is ok, it is ok for the rest of us to.Clearing problems from the ice.... what clearing problems?
Just imagine all sort of problems any of us would have skiing on Bode Millers skis on a hard steep racing track, no matter how good skier you are.If you are not a proffesional ski racer, skis that stiff are a night mare to ski on.I think it is pretty much the same thing here.Petzl sponsored climbers and testers have no problems clearing any of those picks from the ice, they don´t even notice it.But not me.
What led me to this kind of thinking is another story.

Matej, some of what you have written is of course true. "Petzl sponsored climbers and testers have no problems clearing any of those picks from the ice, they don´t even notice it." That part of your comment I call BS on. The picks don't climb ice well. I suspect the new picks are enhanced intentionally to climb mixed. And for that they are an improvment in several ways.

I climb water ice well enough to know the difference and clearly the new ICE is a BIG step down in performance there. A step down for EVERYONE.

Daniel? Yes exactly. Longer nose for more durability on mixed. Bigger hook on the front tooth for thin ice and hard mixed. Bigger teerth to set on thin placements. The ICE pick is a perfect blade for Cham. Not so much for Canmore.

Petzl is a French Company. Many of their sponsored climbers live and climb in Chamonix. Where until recently everyone was using the Cascade picks with no weights on them. No weights should tell you how much "water ice" they do. If I was sponsored by Petzl and making a living from photo shoots climbing on hard mixed ground the new ICE and DRY picks would be an improvement in Chamonix granite.

Petzl should be rethinking their professional feed back if the pommels and new picks are any indication of just how wrong they can be.

Last year I was asking one of Petzls sponsored climber ( he was featured in Scottish ice trip movie as well as in the latest Lynx commercial), what to do about Astro pick and its clearin capabilities from pure ice.
He said to me that there are no problems with this pick(regarding clearing)and that majority of climbers he climbs with don´t notice any differences between cascade and astro picks.But than again not every one climbs with Ueli.In his words, only things that are making a clearing a bit difficult are notches that are pointing backward and are made from picks comming into contact with the rock.
Experience teaches me otherwise.
Matej

Agreed, Matej. I meet the same climber in the queue at the Midi last winter. My take is a sponsored climber at Petzl doesn't critize Petzl products in public or to Petzl. They risk too much it seems to do so. No other reason I can think of.

Because a sponsored climber should be acutely aware of the sublties and limitations of his gear. If he isn't not much value to his opinion.

Which is why the new pommels failed and the new picks are a failure on water ice. The new ICE pick would do well on the SECRET or PINOCHIO...not so well on CURTAIN CALL.

It makes sense for the kids in cham to have these picks, but not as ideal for pure ice maybe Petzl needs to design another pick to fit the type of climbing you are doing that day. Should be pretty easy to make a true water ice pick.

Are you filing down all of the secondary teeth to make them less aggressive?

Yes, I am cutting down all the secondary teeth back a couple of inches into the pick where the teeth start spreading out again.

Do you have a photo of a pic you have modified?

At your request Daniel I have added another picture to the post. Let me know if that helps.

Dane,
Maybe it was also due in part to recent temperatures, but when I tried my new Nomics at the lower Coleman yesterday with these recut ICE picks, I got hero sticks on every swing, no dinner plating, and no trouble cleaning :). Looking forward to the hammers...

Heck I figure it was just great file work;)

I have the old Petzl first generation Ergos and am thinking of upgrading to the Nomics this year. I was hesitant to buy them last year because of problems with the pommel. I tried a pair of first generation nomics a while back and loved them. I have newer cascade picks on my current ergos and was wondering if they will fit on the new nomics. Do you know? Thanks!