The MacIntyre/Colton on the Grand Jorasses

And introducing Dave Searle as part of the Cold Thistle test team and the author of this guest blog piece.   It is Dave's picture of Ally Swinton chugging up the summit icefield of the Eiger that now graces the Cold Thistle masthead above.  Welcome Dave!

....That’s the words Ally said to me when we topped out on Pointe Walker at 5.45pm after climbing the Colton/ McIntyre (with Alexis Crux Variation).


Our plan was to traverse the Jorasses, after climbing the north face, to the Canzio Hut at the Col des Grandes Jorasses for the first day of our epic link. We wanted to traverse the Rochefort Arete to the Forche hut and finish up the Cechinel Nominee on the Grande Pilier d’Angle to Mont Blanc.

Be sure to dbl click the Dave's and Ally's photos to see any of them full size. 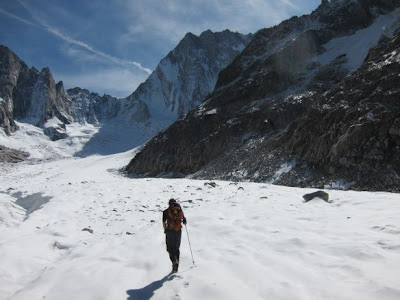 Ally on the way up to the Leschaux hut.

We arrived at the Leschaux hut in good time on the Wednesday (21st) to hydrate, feed and sleep before our early start for the North face of the Grande Jorasses that night. Conditions looked good on the Colton/McIntyre, a lot better in fact than last time I was up there, but, looks can sometimes be deceiving. 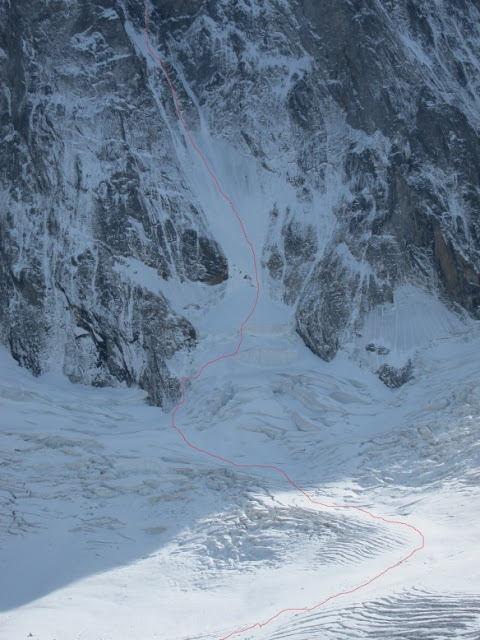 For those interested, Route marked with red on how to get to the bottom this year. 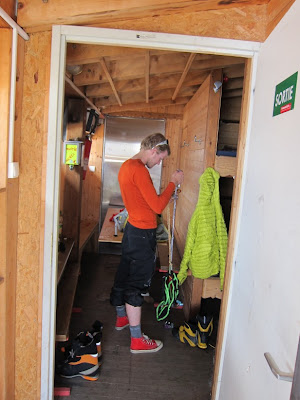 Ally’s phone beeped into life at midnight signalling the time for the action to begin. We
brewed up, got ready and ate the mildly burnt porridge (nice one Ally) after what had turned out for me to be only a few hours of stressed out sleep.

We moved together up the first ice field to the first ice crux. It was a lot steeper than the previous year when Myself, James and Gav had been on it. We were the first team up it too which meant every placement had to be swung for rather than hooked so it felt pretty hard, amplified by doing it by head torch.

I arrived at the bottom of the 2nd (real) crux to find it in less than ideal condition with a large blank section gaping the initial ice ramp and the steep wall. 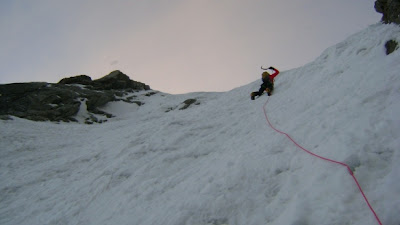 me leading up the first crux ally at first light after the first icefield

We opted for the steeper and more technical Alexis variation (the same way that Mr. Steck went when he soloed the route in 2h25!!) due to the conditions. It was an impressive lead by young Ally, with hard to place gear, thin feet and lots of rotten ice to be cleared. A few American friends of ours have since been up on the face for the Colton/Mac and said they did do the original crux pitch but they also said it was quite hard too “I had to pull out all the tricks in the book for that one!” 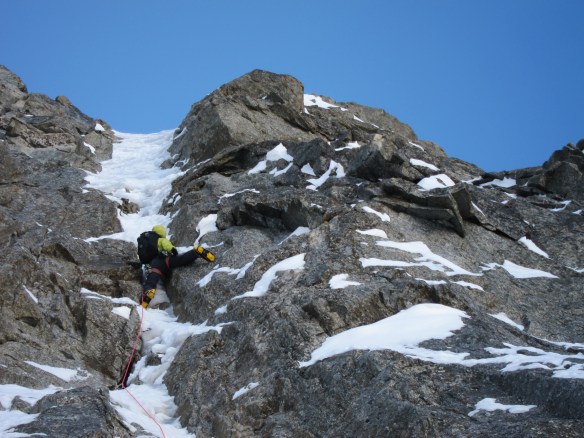 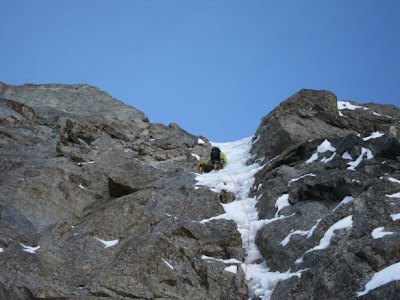 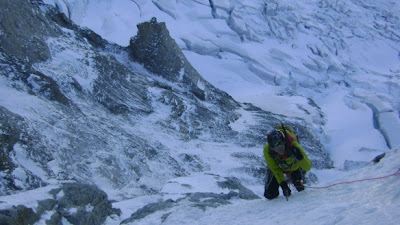 Me following Ally after Alexis

It took a little more time than we would have liked to climb this variation pitch but you can’t hurry these things. If it needs time it needs time. After this pitch we worked our way up to the bottom of the mixed pitches where I took over again. Thin ice, loose rock, poor gear was the order of the day but I knew what I was in for and the pitches aren’t that steep either, just delicate. Soon we were sunning ourselves on the walker spur on the way up to the summit. We passed the bit of tat that I had placed on a ledge, where we had bived the previous year, and I wave of relief washed over me knowing that I wasn’t going to have to sit another night out there without a sleeping bag! 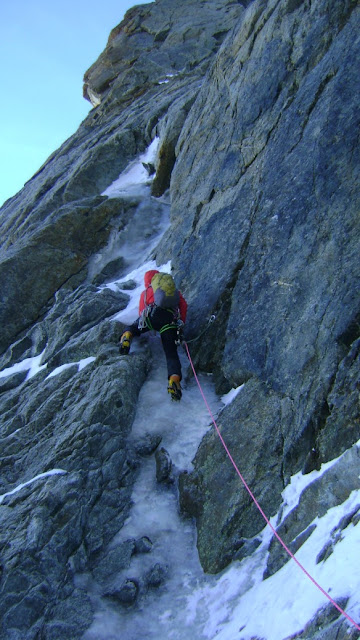 2nd mixed pitch.
We topped out at 5.45pm giving a total of 13hours on the face. We briefly discussed our options as the original plan to traverse the to the Canzio Bivi hut that afternoon seemed like a lot of hard work. Quite an ambitious plan such as this can easily be spoilt but any number of factors and the lure of walking off the back for Italian Pizza’s was strong. We were both feeling the strain after the Colton/MacIntyre but decided we should at least give the traverse a go, so we set off shortly after topping out (Thursday) preparing ourselves for a long night…. 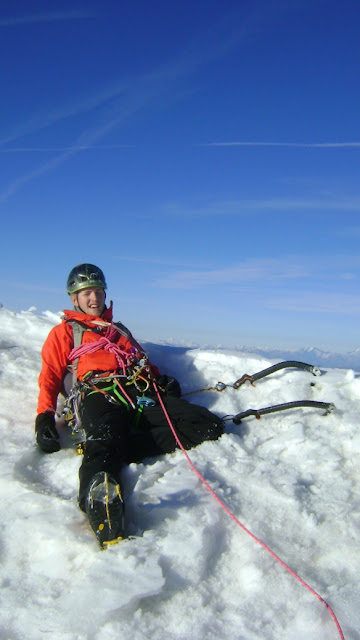 ooooohhh I think I need a sit down!

From Pointe walker to Pointe Croz is straightforward enough and it was soon after completing that section that it got dark…. 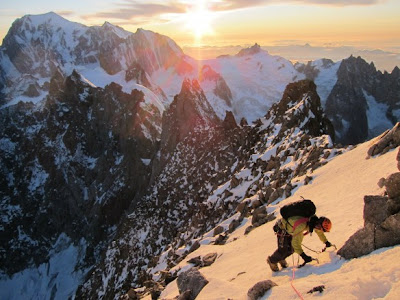 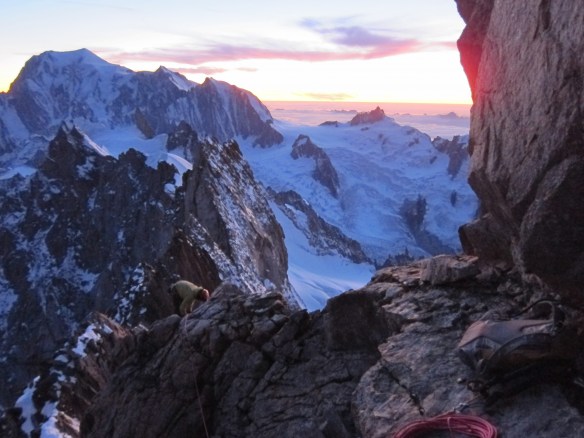 Just before it got dark at the first 1st abb.

The ridge is incredible, knife edge for the most part, with the 1000m north face on the right and equally long way down to Italy on the left. It was also incredibly loose in places which obviously takes a lot of care. There was a lot of rope on, rope off faffing about which eats the time up too. We must have taken the rope off for abs a total of 10 or so times. It was very cold too. We were both in all of our clothes and only movement was keeping us warm which stopped us from stopping to eat something warm. We made a fairly serious route finding error coming of Pointe Marguerite in our fatigued state. This cost us a huge amount of time, probably 4 hours in total. After we had corrected our error we eventually got to the top of Point Young the last summit on the traverse. From here it is about 200m of abseiling to get down to the col where the Canzio Bivi sits. We got down to the hut at 8.30am on Friday making it a 32hour single push from hut to hut. We were both seriously tired from such a long time on the go and with little food or rest (for me I had had ½ a pan of (slightly burnt) porridge, 4 chewy bars, 5 energy gels and a caffeine tablet that day).

Ally and Dave have been ripping it up this year in the Alps.  For Ally's version of the story and his comments on the new RAB sponsorship (congrads Youth!) look here:

http://allyswinton.blogspot.com/
Posted by Dane at 9:48 PM