I am likely the last person to test shell garments.  I admittedly don't use shell garments in my own climbing very often.  More likely something I would use skiing on the lifts or in the back country or for intentionally stripped down quick ascents in winter.

The biggest reason I don't use shells climbing generally is I intentionally try to climb in good weather.  If that isn't possible I prefer cold weather where the moisture that I do see is snow and not rain.
If nothing else this mostly miserable trip reminded me of the importance,  "stay dry to stay warm". 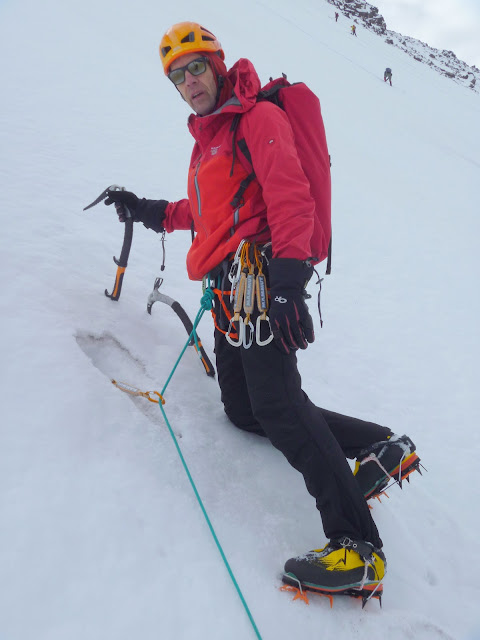 Doug climbing in the Mountain Hardware DRYSTEIN and a NWAlpine hoody

So as I sat on a picnic table on day one of the "shell shoot out" and the rain constant and seemingly never ending you can imagine my excitement to get this demo over with.  If it weren't for the amount of planning by all involved and two of my climbing partners willing to take the time to help me out it wouldn't have gotten done.  A hearty thanks to all!

To do this test and get as much feed back as possible we sorted out base layers and pants so that all of use were using a similar set up.

Next up were the excellent soft shell climbing pants and lwt pile Hoodies from NWAlpine.

We had 60g  Primaloft and Coreloft hoodies along one each from Arcteryx, the Atom Lt, from RAB, the Xenon and from Brooks Range Cirro Hoody.

Expecting to eventually be high on Rainier we also brought RAB Infinity down jackets.   They were intentionally part of Doug's and my sleeping system as were using the Feathered Friends Vireo.  I got a chuckle when we all climbed into the tent the second night.  We and  all the gear were wet and the temps were dropping.  Lee pulled on his  Infinity and snuggled up in a F.F's Swallow.

I'll be doing follow up blogs on all the gear I mentioned above.

For the shells?  It became obvious on day one that some of the newest soft shell technology I had wanted to  test for breathability against the newest stretch water proof gear wasn't going to happen.

It was simply too wet.  Too much rain, with a measured 2" on day one and we had yet to leave the parking lot.  Other hard shells I wanted to take didn't show up in time.  So we'll have to do the shell test  again I suspect.  And a serious look at soft shells is obvious one as well.

The soft shell tops stayed in the truck on this one and rightfully so to be fair. 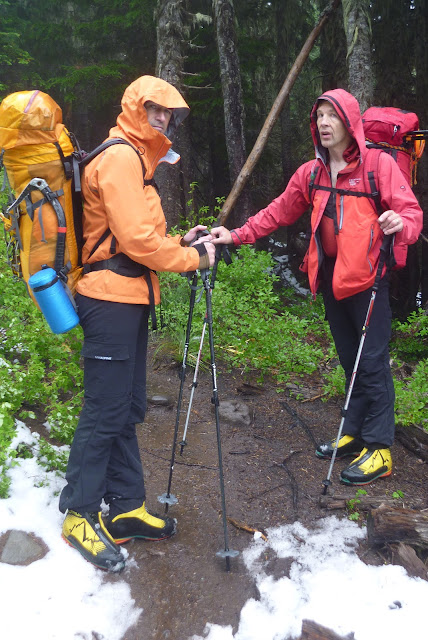 Here are the jackets we did take in:

Day one. Short day just getting organized and trying to figure out the weather window on Rainier. We finally gave up on that and just decided to test gear and if possible get a little climbing in on a tiny bit of snow and ice on Observation Rock if we could stay dry and motivated through the weekend. All of us just picked out what ever garments we thought appropriate that day for setting up the big "base camp" style tent, and dinner.

Doug and I gravitated to the RAB Infinity down jackets.  Lee had brought his own Goretex down jacket.  Even in the rain all three were cozy setting up our "base camp", sorting gear and getting organized.  The RAB Infinity is Pertex® Quantum 10D ultra light and was never intended to be a rain jacket.

But in this case it worked much better than expected.  From this experience the RAB Infinity Endurance is the next down jacket I'll own.

I had thought we all would have jumped on the 60g synthetics right away.  I knew better and still went for the down.  More on that later.

Doug grabbed the Mountain Hardware DRYSTEIN.  Lee the  Outdoor Reasearch AXIOM.  And me, having first dibs out of the bunch had already grabbed the Marmot HYPER.

As much as I like the Hyper after the first 4 hours in the rain on day two I have to confess it is not in the same league as the other three fabrics we used.  With ice water running down my shoulder blades I reluctantly acknowledged my mistake and gave up on the Hyper and switched to my stand, Westcomb's APOC in Neoshell.

The point was clearly made.  In these conditions you needed serious rain gear.   If you were hunkered down and not having to move, commercial fishing rain gear would have been more appropriate

Now it was time to see if I could dry out wearing a garment made of Neoshell.  Just how breathable is Neoshell?  Remember we were all in soft shell pants.  So my lower body was damp and my upper layer of Cabella's  E.C.W.C.S now wet before I changed jackets.  By the time I turned in that evening everything was still damp but I was warm and drying out on top.  Only my socks and boots were still truly wet...from the water running down my legs.

My soft shell pants had seen a lot of use compared to the shiny new  NWAlpine pants Lee and Doug were using.  Because of the new DWR coatings on their pants they stayed drier and it showed.  No water in their boots!   Water still beaded up on their pants and clearly it did not on mine.  Pays to remember you need to re-treat soft shells on a regular basis if you want to maintain the water resistance.
I guess it should be no surprise, but it was for me...again.

These are the real players from what I have seen to date.
Reliable shell gear that is stretchy, breathable and truly water proof came down to this: 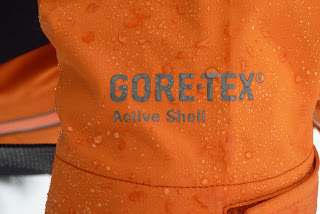 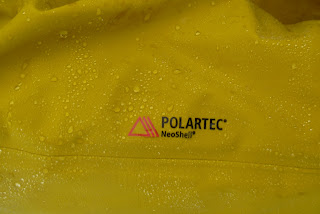 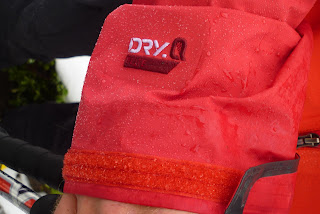 More to come on the subtle differences we could perceive using them.
Posted by Dane at 10:48 AM

Had a similar experience in the Waddington range a couple months ago. Had a Golite jacket (similar to the Marmot Hyper) that was not up to par with the Muti-day rain storms that hit are group.

In my opinion, hard shells still have there place in alpine climbing especially in places with maritime weather (north cascades in winter comes to mind). Also gaiters are helpful if the weather is not extremely cold or snow slogging is expected.

Did the built-in gaiters on the Batura boots keep water from running down their legs and into the boots?

I supose in those conditions u couldnt test the arc Acto mx hoody, couldnt u? What a pity ...

ACTO wouldn't have lasted an hour in this rain.

Messner? If your pants stay on the outside of the gaiter on a Batura and the pant is water resistant (and the NWAlpine pants are when new) or water proof the Batura will keep you dry. If you have water running down your long johns and into your socks no boot will keep you dry.

Doug and Lee had dry boots and fairly dry pants. I had wet pants and because of it wet boots.

Is it even remotely conceivable using your wildest imagination to wear your base layer, any fleece layer, and your shell pants ALL outside the Batura built-in gaiter if you find yourself in rain, hoping to minimize getting your boots, socks and feet soaking wet?

Messner? I don't think you fully understand the situation or gear selection used. A simple pair of decent water resistant SHELL pants over the Batura gaiter would keep water out of your boots, socks and long johns. (a better choice for the amount of rain might have been a Goretex bib)

Not everyone's choice. Just ours for this specific trip/test.

Have two questions for you about your trip and shells

Is ECWS base layer as good as it has been hyped up to be? How fast did the base layer dry out compared to most wool base layers?

Are pit zips worth the trouble of getting on shell jackets?

I'll be doing a longer and more detailed blog on these soon. The Polartec, Cabella's ECWES under garments are just short of $180 retail. And I have to admit they are really good. But they are really expensive as well.

It was the base layer and only layer I used for three days. I used a shell over them or a 60gr synthetic puffy the majority of time. Put them on day one and took them off when I got home last night. If they had a hood I might not use another base layer ever again and the NW Hoody is one of my favorites for all around climbing.

We got a good laugh from this....my thought is there is some serious promise for these in the super light and fast crowd. I may not be a part of it these days but like porno...I know it when i see it.

Pit zips? No use imo...better designs can easily out perform basic pit zips these days. Mesh side pockets..which a few of the better jackets had easily offer more effective ventilation and still give good protection and lwt weight imo.