The Monkey on my back!

It is possible to teach old dogs new tricks.  If just isn't always easy to teach the trick.

One of the fun things about working with Blue Ice from Chamonix is that I get to see their newest designs.  (and make a few bucks from my own fun)    But while I get to see a lot of new gear there isn't a lot of "new gear stuff" that gets sorted into my everyday climbing gear.  Especially now that I climb like once a week or once a month instead of every day.

So back in July when the newest products showed up here in the USA from Blue Ice I immediately ran outside with my Warthog for a show and tell.  The one Double Mono was gone the next morning to a anxious wall climber.  And the Octopus pack and a tiny (from my perspective)  chalk bag sat ignored.  Not like I planned to order any of of the chalk bags or the Octopus packs.

When I do use chalk I generally like to dust up to my elbows :)  A big chalk bag makes a good place to stash your sun glasses when the thunder showers roll in or your approach shoes if they are small enough as well.  So if I am such a dolt on my chalk bag size image what my first impression of a climbing specific duffel bag is?   Let me say I love the color but the whole idea of a climbing duffel?  Not so much. 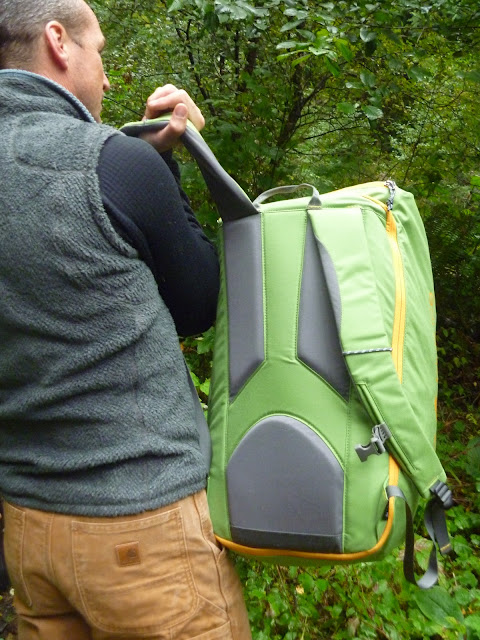 I've owned and used a few "climbing duffels".  Great bags for throwing your kit into and hauling it around your local rock climbing area or even the gym.  Extra clothing, food, water, your harness and shoes plus what ever is required for hardware that day, drop right in.  Lucky for you if your duffel has a tarp to keep everything organised and out of the dirt.

I kinda figure they were a "sport climbing thing" as I generally walk to the rocks with a funky ruck, my sheet everywhere, impossible to find in 2 minutes and the rope gets immediately thrown in the dirt. That system has been tried and true for years.  And it worked.

Of course Giovanni is a smart guy so he decides to make the Octopus.  Not that I think the Octopus is a great idea mind you.  I'm the only one who thinks I know everything.  And I am pretty sure I do most days.    So the Octopus that arrives here and sits in the corner of my office for months.

Couple of us decided a little exercise is mandatory for today.  And I'm sure we'll need most all our kit and hardware to do a little dry tooling in the rain.  Boots, ropes, hardware, ice tools, extra clothes go in the bag...you get the idea.  Way more junk than you would ever think about bringing on an actual climb.    And lot of extra awkward shaped shit to pack around.   It is an hour R/T walk tothe walk may be less.  Lee hauls out his huge North Face duffel.  I could have used my Brooks Mountaineering version of the same bag.  But I am thinking at least the Octopus might be a  more manageable size and still not be over stuffed.

So I pull the Octopus out of the corner and strip the wrapper.  And then unzip the back panel.  What we are doing today in the rain is kinda like sport climbing.  Throw all the sheet in the bag and trundle 20 minutes down the trial and pull it all out, sort through what you might need and get on with it.

Generally is a lot of nonsense and a short walk.  But a duffel can suck if you put enough weight in it as can any decent sized well designed climbing pack.

This one didn't suck.  Even with unprotected Boreal Fruit boots (my new Ice Ninjas) stuffed in the Octopus it was comfortable and nothing poking me in the back. 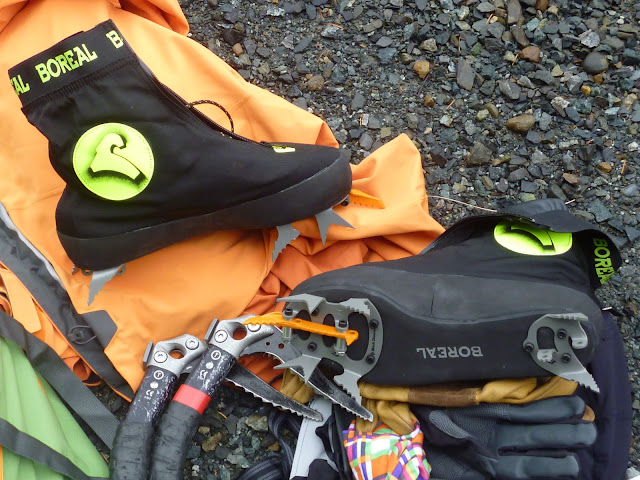 As comfortable as any of my climbing rucks and more junk in there, all packed poorly and with little planning.  I thought that impressive and pretty cool actually. 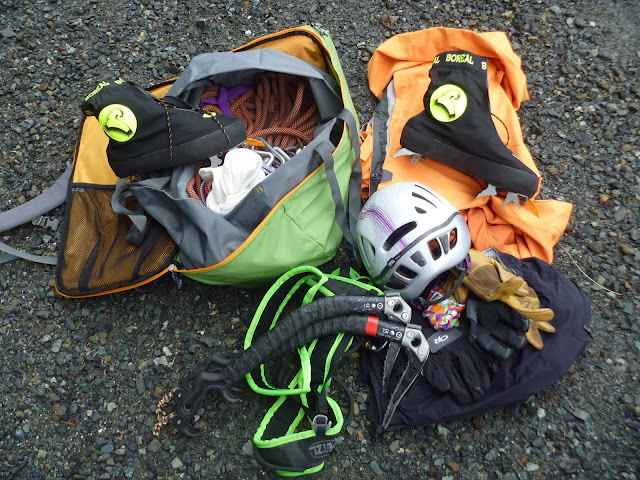 So I was pretty happy with how the thing carried.     Some surprising features for me on the actual pack.  One good sized zipped pocket on top which ate a couple of the newest full size rain shells.  A half panel mess pocket internally to sort the small stuff or may be your rock shoes or chalk bag.  Even my size of chalk bag.   And then there is the very nifty pull out "grocery bag" with all your kit in it...or your rope more typically I suspect. 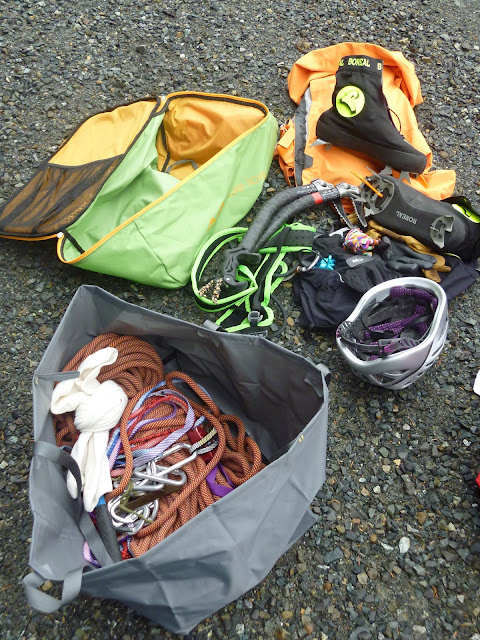 And then the thought came to mind...this would make a decent piece of travel luggage.  And you could ski and climb with it if you were pressed and not actually be unhappy doing so.  Might even make a really nice ski/mo pack if it had a ski carry system.   OK, seriously it would, but it ain't made for that.   But it could be:)    What was not to like?

Guess I shouldn't be so cynical.  From a piece of gear I "would never" use yesterday to one I'm now pretty excited to own.  Old dog, new trick.  But I still have that streak of cynicism.

I suspect I'll sell more of these than any other Blue Ice piece of kit I have here in the US.   Once the word gets out...and I actually order a few from France.  A little slow may be but I eventually catch on.

Crikey!   May be I should rethink those pesky little chalk bags as well.
Posted by Dane at 10:01 PM

The Blue Ice 30L looks like a great pack for the money. Where are these available in the states?

Blue Ice gear is available in North America on a limited basis here:

Ha, ha! Wrong Ally if you commented on the CT picks last time and you won't know Dave :)

Dry tooling locally? Lots of rock around. We are working on a new area I'd rather not make public just yet.

those picks need sorting out dane!

Obvious now just how hard I dry tool isn't it? I gotta have some big juggs to get up anything. But totally dull they do last longer :)