Can you tell me why? 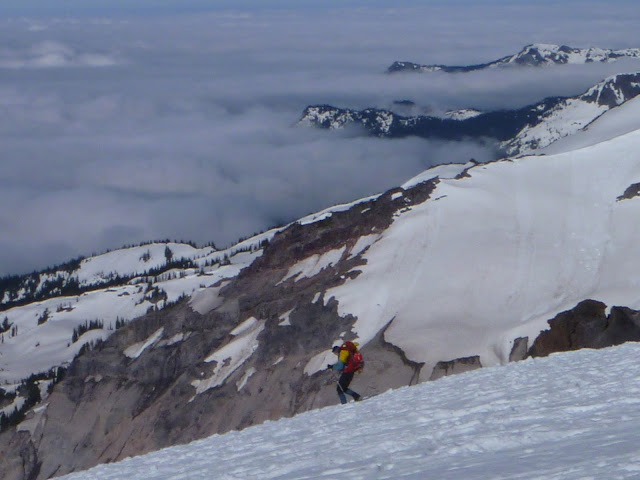 Why aren't we skiing?


Over the years I've spread my kind of love over a few climbing forums.  Enough so that I've been booted off at least one.  Not that I give a chit because I don't  It is simply entertainment for me.

Three of the funniest exchanges I've had (to me anyway) have been with in retrospect, obviously very young climbers.  No matter how good technically they might be or thought they were during the exchanges I was laughing at them and poking fun at their expense.  Yes, I know I can be a prick.  No need to restate the obvious in a comment.

In no particular order:

"Me Mum bought this fine jacket for me..best insulated jacket ever made"...of course he'd never used or owned any other jacket at the time.  BBBBBBBBBBBBBBBEEEEEEEEPPPPPPPPP!    Last I checked he is still a little pissy about the exchange.  They simply don't know what they don't know

"Climb can't safely be done without several screws and half a dozen pickets" BBBBBBBBBBBBBBBEP!  My answer?  "Most anyone could solo that one in decent conditions.  And I have never ever placed a picket.  Mind you it doesn't mean I haven't wanted to just never had one :)"  Original climber sacked up and soloed the same moderate climb a few seasons later.  Same thing most of us had been doing for decades now with minimal gear.

"I've skied for years" a most recently famous alpinist tells us in a focus group on new gear. BBBBBBBEEEEEEPPPP!   Mind you the "kid" is just 21, no formal education past high school  and his experience skiing in the last 15 years (he started at 5)  is hard to relate to an uncaring audience of 50+ year old  engineers who have been skiing them selves since they were 5 or younger and designing or working in the ski industry since they were 18 years old.  Hard not to roll your eyes when I hear I've been skiing my whole life....when the speaker is 17 years old and the topic technical in nature.

Not that I am a rocket scientist myself or know much about anything in particular.  My BS meter has gotten better over the years how ever.  "Nice ski, but ya the mount point is FUBARED dude."
"Someone might ought to look at that more closely."    That stainless and plastic interface? Take body weight?  Maybe.  Hammer on it?  Not likely.  Trim the weight by making it smaller?  OK.  But make it so small it now breaks in the same application?  Makes no sense to me. 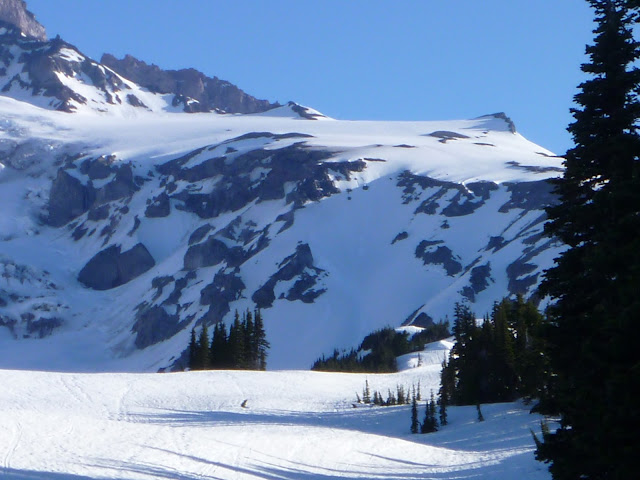 So, why aren't we skiing?

I've done Rainer by a dozen routes in all seasons, many, many times and until recently only taken skis on the mountain a couple of times.

Now I have to ask why are you NOT taking skis?  You can guess at my age.  But in any race I am not going to be in the front of the pack.  On the right day if you break down the age groups into 5 year splits I can generally hold my own with what ever amateur shows up.  As serious athlete will generally, and easily bury me.  I'm lazy and WEAK...there I admit it :)

So if I am doing  moderate climbs and skis like Rainier and I am able to catch you and eventually passing you on my light weight gear you might want to rethink your own gear choices.  When I can bury you on the up and then drop you on the down in light weight gear it is either time to  bury your head in shame or pull out the check book, 'cuz you obviously SUCK!

If you climb and read a winter climbing blog and don't ski?  YOU really, really SUCK!

All the spare excuses have been used and you have been found sadly, wanting.  If it is a fitness issue, change your diet and get a dog to run with.   They are likely the only one that  will have you anyway.

I have one myself :)  His name is Marley and he likes to run, really likes to go on bike rides and anything related to skiing,  plus the occasional cinnamon roll or pistachio. 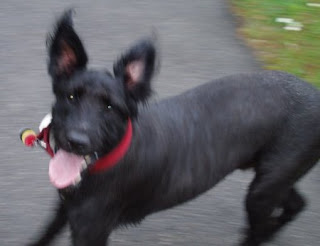 No one is really as good as they might think they are or as smart.  We generally judge each other much harder than we judge ourselves.  Never hurts to brush a little sand off your you friends ass instead of grinding it in.  You never know when you might need the same favor.

But I am still going to chuckle under my breath when I skin past you or ski by.   Simply because I know I'm the one having more fun...and I'm just the old prick willing to admit it  ;)    PS...Marley would be laughing as well he's just a much nicier guy when he sees a human...sucking @ the fun!
Posted by Dane at 3:40 PM

I'm a splitboarder myself. What holds me back from bringing my splitboard on every trip is the lack of climbing oriented snowboard boots. I guess I'll have to grow up and buy ski's this year......

I'm a splitboarder myself, the only thing that stops me from bringing my splitboard on every trip is the lack of climbing oriented snowboard boots..... and I obviously suck.

Hey Kevin, I really wrote this blog for fun and to poke fun at my long time climbing partner. He's awesome on a snow board and always stronger than I in the mountians. Last winter I did the local ski mo race, Vertfest. They allow split boards in that race. And Dave always tells me how good a split board is in the mountians. Thankfully I have never had to endure that torture to prove it either way. When an obvious fit and manly snow boarder started slipping and then went to boot packing on Vertfest yelling into the wind "this is a cruel fucking joke"...I had to wonder just how cool split boards were. If the boarders anguish was not impressive enough the results told me all I needed to know...split boards suck.

just to prove how bad a split Board really sucks on the UP compared to a decent set of ski....

These days on the down...snow board has no advantage and our boots (TLTs) will climb anything made of ice...easily.

I admit it, I suck. But I’m your age and I didn’t grow up on skis. And when I started climbing I was a crag rat. I always thought the mountains were the place to really have fun, but if you’re living in Wisconsin, Western New York, or West Virginia (all the places I lived for the first 12 years of climbing) you don’t get much of a chance to go big. I was real happy to get two weeks in the summer in the Tetons. When I finally started skiing (when I lived in Buffalo) it was nordic skiing because as a poor grad student alpine was way beyond my means. I even tried to use skis once to access an alpine route, wearing my Naronna leather 3 pin boots and my original Fischer Europa 99 aluminum edged skis to get to the Hallett Chimney in Rocky Mountain National Park. But that meant lugging my nine pound Le Trappeur Pros along with everything else on my back. We had to turn back when my partner’s Ramer bindings broke. Just one more thing to go wrong. I got to be a mediocre telemark skier living on the East coast, getting 15 skiing days a year if I was lucky. I still got plenty of cragging in and the occasional alpine route, but I was pretty mediocre at that too.
I finally moved to Seattle and finally learned to alpine ski, but picking up it up in my late 40s I never got very good and never felt really comfortable on anything scary. By this time I’d also faced my mortality enough times that I wasn’t alpine climbing much, if at all. I did some minor ski mountaineering on guided trips and some with friends, but again my respect for my mortality meant I couldn’t ignore the avalanche and crevasse danger like a lot of the other people around me. It also got to the point where I couldn’t afford the gear again. It seemed every year the latest new ski or boot was a necessity to enjoy going out into the mountains. And these days it costs $2,500 and up for a set up that’s only situational. $1,600 carbon skis?!? $1,500 carbon boots!?! Maybe if that was all I did and I were 20 years younger. So instead I bought a new performance (not race) nordic set up for the first time in years and spent most of the winter getting my nordic skills back. I still suck, you may pass me because I can count all of my short twitch muscle fibers on the fingers of one hand, but if you’re as lazy and weak as you say you are I’ll pass you at the 40K mark and I’m still having fun.

So now I gotta go by ski's to be legit?......my girlfriend is going to hate me.... She'll understand when I tell her that "Cold Thistle" told me to do it.

We are still skiing...and on any gear... that is an accomplishment in my book :)

Any Nordic skier can tranfer that skill to the lwt modern skimo gear. And enjoy the mtns even more. But if you are going 40K...I am not sure you can call that "fun" even skating the entire distance downhill :)

I get blamed for a enough stuff @ home! Sack up and either win Vertfest with a legit time on a Splitboard or buy skis :)

A few lessons on modern downhill skis and you'd be schooled up. The check book? That is a totally different matter. Unless you wear a 28 or 29 and like the kind of skis I like :)