Heads up!? Rebel Ultras are now shipping in North America. 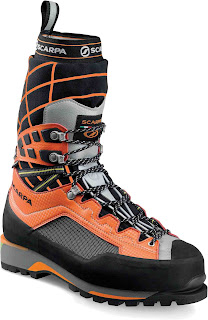 Few pieces of gear I would ever bother to make this kind of announcement on.  Any particular piece of gear I think is *that*  good I will typically want a spare of.  The Ultra is, imo,  *THAT* good.  Only time and other users can verify that fact.  I heard today that the Ultra has arrived in numbers at warehouse in Colorado for North America deliveries.

I'll have more to say about this boot once I get out of my ski boots and get time in them again.  Till then my earlier review is below.  If you are interested in a LWT boot and why you should be, check out the second link that Eric wrote.  My guess is the first shipment of the Ultra will sell out quickly and we'll be screwed here in NA waiting for the 2nd shipment to come in late Fall.  Can't say you weren't warned.  Or I could be totally full of shite.  We'll have to wait and see if my prediction is true or not.  I'm not taking a chance.  Even if that means owning two pair.

Funny, I noted in recent photos of Ueli Steck's gear room half a dozen pairs of the new Ultras.  Now that is a pretty pathetic gear geek to be looking at photos of some guys gear room, right?  Also noted I haven't seen Steck in any other boot but the newest Ultra since they made production and well prior to production as well,  back to Steck and Carolyn George's ascent of the Dru Couloir, 10/2010.  Take that for what it is worth.

http://coldthistle.blogspot.com/2010/05/why-weight-of-your-footwear-is.html
Posted by Dane at 3:59 AM

And have arrived at Snell as well. I should have mine soon.

I'd really like to hear what everyone else thinks of this boot once you get some time in them.

Is it a game changer for you?