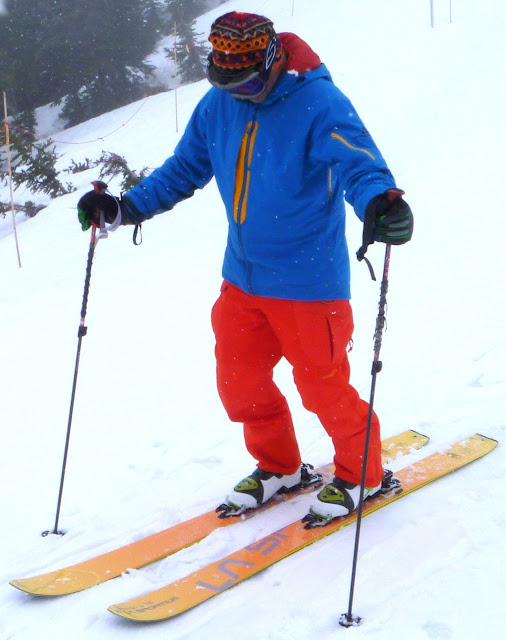 I've spent much of the winter skiing different skis and boots from several manufactures.  Most of them with at least some touring application built in.

Over the last week as I have been going back through my notes on ski performance.  I've also made a point to look up other online reviews of the same skis.   Much to my surprise more than once I have to wonder if the other reviewers were even on the same skis!

It is all opinion of course.  But geese, louise, it is really worth looking around before you buy skis these days.   As I often say, "what works for me may not work for you."   If I bought skis by  the reviews I have been reading wouldn't likely be on any of the skis I have come to really treasure.

And more than once those same reviews have kept me off a ski.  Same ski I have come to  appreciate.
Same ski another reviewer found so flawed.  I was encouraged to look at another boot by a review but then failed to realise just "how bad" my other boots were.  Or how "bad" they were for the other reviewer anyway.

In the climbing world I have seen 8000m down jackets used and reviewed for cold weather bouldering.  But I haven't seen seen rock shoes reviewed used for ice climbing.  Some times I think that is what happens when a lwt touring boot gets reviewed as a full on free style/big mountain boot.

If you don't know what the item was designed for...it pays to do some research as to the  the original design process behind the piece of gear you want to buy.  Make sure your use is the same as the reviewers is a good place to start for worth while info.

I have literally no clue what influences ski testers any more than how climbing gear gets by that is sub-par on performance.  I'd bet some simply don't notice a difference.  Or  that particular piece of gear doesn't enhance their experience.  Fair enough.  Others I suspect simply don't care as long as the newest gear keeps coming their way.

And may be a few simply get stuck on some arbitrary numbers that decide "THIS" is the ski.  "The" ski they should be on or the closest thing to it.   "The" next piece of rad gear.  Trust me not every new piece of gear is so "rad".

Many of the skis I thought might impress me this winter simply under whelmed me more times than not.  The skis I wasn't expecting much from have time and again, simply Wowed me.  Ski models are included in the comment, but the size...both width and length, has as well.

Two issues I find really important in all these skis and boot tests while using tech bindings is "ramp" angles and ski mount points.  More on both coming soon.  If you are looking to get the most performance from your own gear set up.  Both issues are worth knowing a lot more about.
Posted by Dane at 6:44 PM