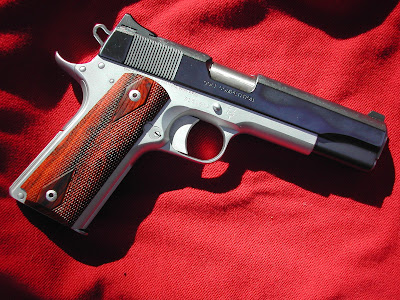 There aren't many things on the planet that can't be improved.  Generally (but not always) they can be improved by simply making them less complicated or making them easier for the human form to adapt to the technology.  The Colt 1911 pictured above has 49 parts.  The handgun was initially designed in the year, 1911.  It is still state of the art today for its intended use.  Parts have been made to better fit the human hand and for easier use but still the same 49 parts.

I geek out of all sorts of toys.  Vintage 911 Porsches, carbon fiber road bikes, ice tools, packs,  mtn boots and cold weather technical clothing are just a few of my interests.

Six winter seasons ago I was introduced to the Nomic.  Only 2 seasons previous to the that, the original Quark.  And I thought the Quark without a pinky rest was "radical" tool at the time.

It took me 90' of top rope climbing to realise just some of the huge potential in the Nomic.  I knew I didn't what a razor sharp adze staring me in the face on a pull up.   But even then I couldn't wrap my head around not having a hammer easily available.  Back to the previous topic of  "make it at home".
A decent hammer for the Nomic would seem to be a a simple process to design.   After all it is only ONE part :)

A 911 has several complete "systems*  (brakes/unibody/suspension/engine as examples)  to deal with.  That accumulation of  systems (made of specific parts) defines the end performance of a 911, a 1911 or a Cervelo for that matter.

My hunt for the perfect Nomic hammer started that first season.  My first Nomic hammer was a chopped up Petzl hammer TIG welded to the Nomic mixed pick.  Next step was to fit the Nomic with a bolt on hammer like the older style Quark.  Then I saw Ralph Burns' (no relation) May of  '07 adaptation of Petzl's own design work from the original Quark.  Great idea.   And Ralph was generous enough to share his effort with the entire climbing community.   But less room to work with on a Nomic head than the older and much larger Quark head.  Less weight was needed imo, not more.  The answer wasn't  a simple adaptation of Petzl's  previous technology.  The project needed a bigger picture view and more thought put into the ergonomic detailing. 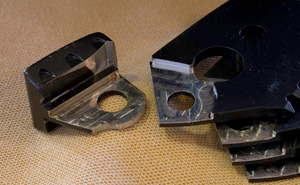 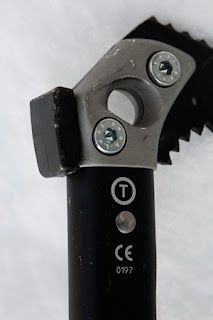 
I continued my quest for a better hammer to be used on a really funky hammer handle...the Nomic.   I was lucky enough to get some help from other interested and technically astute climbers. 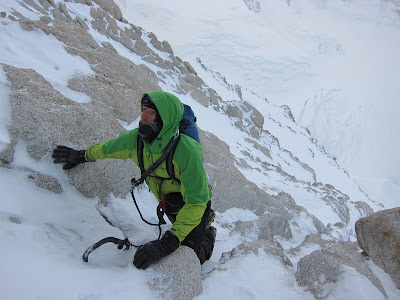 Colin Haley's photo of  Bjorn-Elvind Aartun soloing on the Cassin


The late  Bjorn-Elvind Aartun  was one of the first to use the early CT production hammers and offer constructive criticism.  It was his idea to cut the hammer face literally in half for a swing weight and a better over all balance of the climbing tool.  Balance is just one of the reasons the Nomic excels for its intended purpose.    Mind you only the first few prototype hammers were cut from Petzl parts.  The production CT hammers were being cut from bar stock and then heat treated.  I had the option of doing anything I wanted for profile and finished weight.  Nomics did not have a hammer so the pick and hammer inner face was open to new design efforts as well.   You have no idea how happy I was to see Petzl finally commit to a hammer/pick design interface of their own 2 winters ago and not have to cut another pick for my hammers over lapping interface. 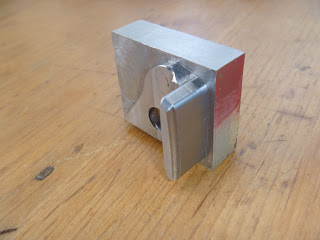 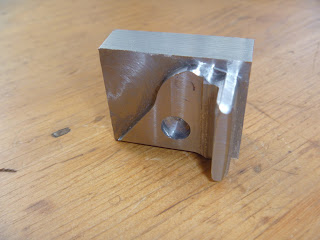 Half of the current CT hammer cut from bar stock

There is always room for improvement.  Even on a 100 year old design like the 1911 pictured above. Pictured below are 6 seasons worth of slightly differing Nomic hammer designs.  The idea was to have each version  a little better than the previous.  Not as easy as it might seem to go from A to Z.   Not trying design H, L, or R might well be a mistake.   So if you really want the best you might use more than one fabric, more than one design or more than one steel in the process. 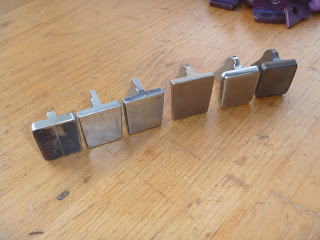 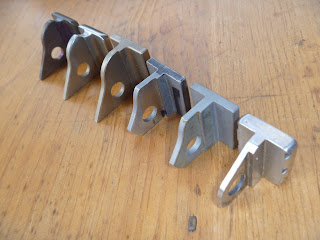 The current design was always intended to use with either the old or the newest style Nomic.  I wanted it to be the best hammer available for the awkward Nomic shaft, offer as much protection of the Nomic's soft aluminum head and just as importantly not effect the balance of the Nomic any more than absolutely required. 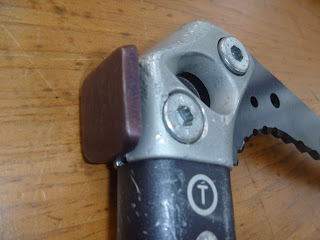 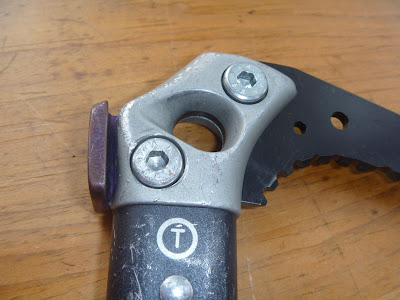 A hammer is rarely needed on a Nomic.  And the CT design is only one of three available for Nomic owners.  It is how ever the easiest to fit to the original Nomic head design that Petzl has never offered a hammer for. 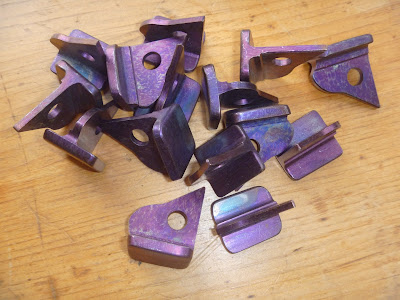 And yes, I have some spare hammers left from the last production run.
You can purchase them on Pay Pal from the link listed below.
http://coldthistle.blogspot.com/2013/01/cold-thistle-hammers.html

Recently repurchased Nomics lost a couple years back in a little incident. I expect that I will have to buy a new set of picks, but after that the current CC hammer is fine with that gen. head?

Hi Matt, you don't need new picks. These hammers bolt right on with no modifications to the current (new) generation of Nomic and picks.

Sorry, should have been more specific. I bought used first gen nomics.
-m

OK, then yes you will need the new current production picks. The CT hammers will bolt right on (no mods required) with new picks and the old tool head.

Hi Dane, I am trying to fit one your hammers to my latest gen Quarks, but I am having trouble unscrewing the bolt that holds the current hammer on. I have dripped tri flow on the seams of the bolt and get enough torque on the allen wrench that came with Quark to flex the handle of the wrench, but it is not coming loose. I also took it to my local gear shop and they could not get it. Suggestions?

Try a really long allen wrench in commmon use by the road bike guys for tools. If that doesn't do it add a cheater bar (pipe) to the long wrench. That will.