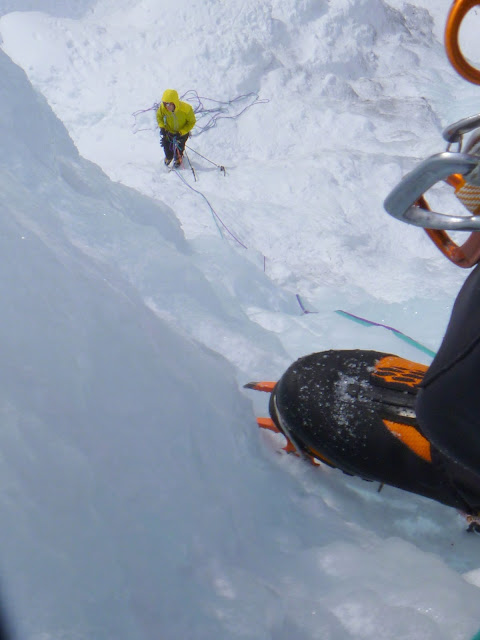 Obviously the point of a crampon is to make life easier (and safer) on any surface that boot rubber won't.

From the inception of the blog I have harped on crampon fit and crampon durability.  Broken crampons frames, broken bails and loosing a crampon mid pitch was a fairly common experience for many climbers.  It is less common now with a little conversation in the community and some education as to the cause.

Thankfully this will be a short blog post and not about crampon failures.

It really is a pretty short topic.  About 7.5mm give or take a mm or two.
And thankfully the cause good or bad is simple...it is your choice.

Not uncommon for some one to ask me how long I run my front points (think dual front points for the moment).  For the uninitiated that might seem strange.

On smooth, plastic, late season Canadian ice I like to have a fairly short set of front points.  I know the ice will easily supports my body weight and the sticks (boot swing and tools) are easy.   Typically the front point I like on winter alpine ice as well.   Alpine ice is not water fall ice.  It isn't generally as steep or technical.  But it is generally hard as old concrete.  I don't need any more leverage on my size 45 boots than absolutely required.

A rookie mistake on water fall ice is getting your heels too high and popping a crampon.  It is also a rookie mistake to run your front points too short on bad ice and ...you guessed it....pop your crampons every other foot placement. 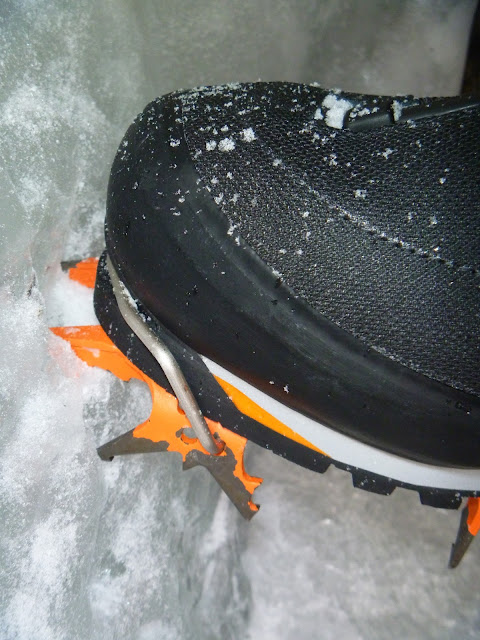 What you are looking for in a foot placement besides full penetration of your front points is the additional support of the secondary points.  Monos offer some additional options here if you know how to use them to best effect.  But from what I have seen most don't know how to take advantage of a Mono on ice. 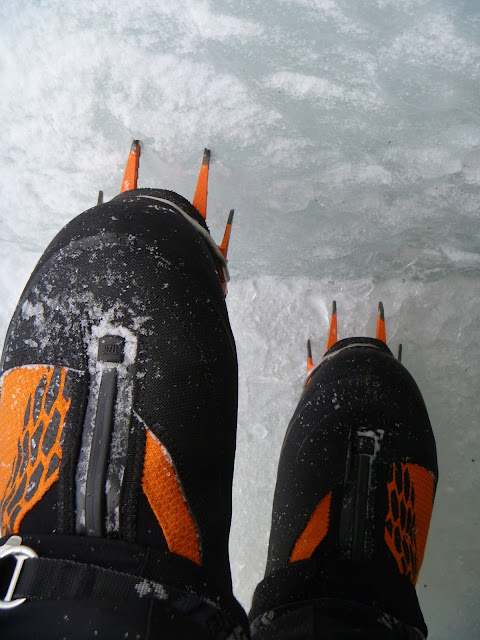 Same crampons and front points shown above on the Scarpa 6000s.  Just a different point of view.  I am using the back toe bail hole here.  But your boot to crampon fit will be defined by your boot sole and which hole in your crampon is required to get the appropriate front point length.   Other experienced climbers run even longer front points that what is hsown here in similar conditions.   Monos especially so.

Rookie mistake?   Been there, done that.  To the point I was wondering if I still knew how to climb vertical ice.  Humbling experience.  And that was just on a top rope!  If I had done that on lead it would be a long time before I would be back for more. It was scary, insecure and really, really pumpy just trying to get and stay on my feet.

It is a subtle call and not one I made a conscious decision on, although I should know better by now.  One of the longest nights of my then very short climbing career was a 4000' alpine ice face done of crampons that had been sharpened a few too many times.  The overly short front points were making my life miserable with insure feet.  I vowed then not to let that ever happen again.  But it seems my memory failed me.  I did do it again recently on much harder technical terrain...even if it was only a top rope problem. 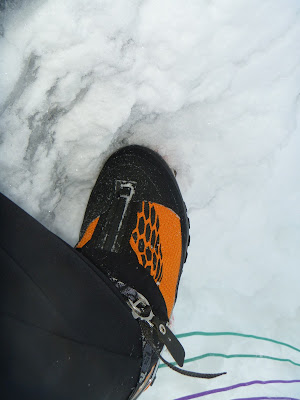 In typical crappy snow/neve/ice alpine conditions with snow covering anything from rotten air filled snice, to bullet hard, black ice always better to error on the side of caution and have more front point than you need rather than less.  But less important on alpine terrain than on steeper technical terrain...like the conditions you'll find on most water ice. 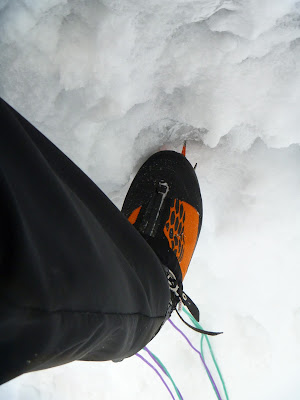 In the wrong conditions the only penalty is a little more strain on the calf by using longer front points.  In the right conditions you gain additional security and solid feet.  Always a bonus to have good feet!


The .75mm is the distance between the front an back toe bail placement on a Petzl or Black Diamond crampon.  Pretty much a .25".  Unless you are always climb on smooth dry and plastic ice or hard mixed  (rock climbing)  you'll generally want  more crampon front point than less.  Bottom line super short version?  When in doubt, go LOOOOONNNG!  You just might be better at this sport than you first thought :)

IMO, the Dartwins are hard to beat crampon for waterfall ice. I use both the Dartwins and Darts with La Sportiva Nepal EVO GTX and the fit is really good.

Hey Larry, I too am a big fan of that combo. Expensive to replace but good stuff.