Here is a quick comparison on two of the best in light weight hard shell technology available today.

I added a third shortly after:
http://coldthistle.blogspot.com/2013/01/a-third-shell-material-westcombs-focus.html

Any of the three can be easily used for most any sport where you need some protection from nasty weather, including climbing.  In the case of my buddy Dave and I, ice climbing for sure but lift/side-hill on a snow board or skis as well or a quick run on the bikes.

It was no accident that we both showed up for a reunion at our once home town ski area kitted in similar gear.  Even though I was skiing on lwt Dynafit gear and Dave was on a snow board we would be on the same terrain.  Do this stuff long enough and there ends up being a  well thought out and comfortable "uniform" for a good day out.  Matching colors with your Bro?  That is just a little weird!

David and I have been playing on this particular ski hill together almost longer than I can remember.   I do seem to recall us teaching basic search and rescue techniques to the volunteer ski patrol bitd and ripping it up around them on 3 pin tele gear though.   Gear I am happy to see long gone from my storage closet! 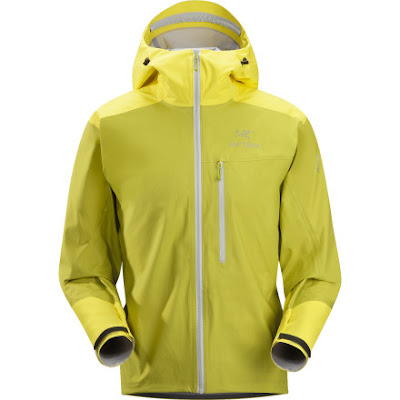 Below: Dave in his Arcteryx Alpha FL leading 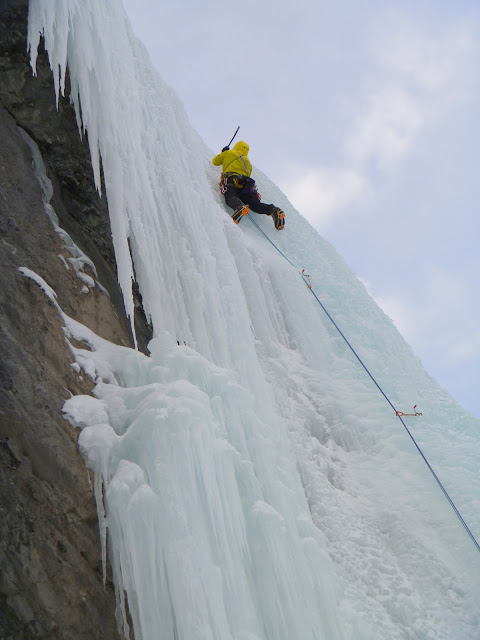 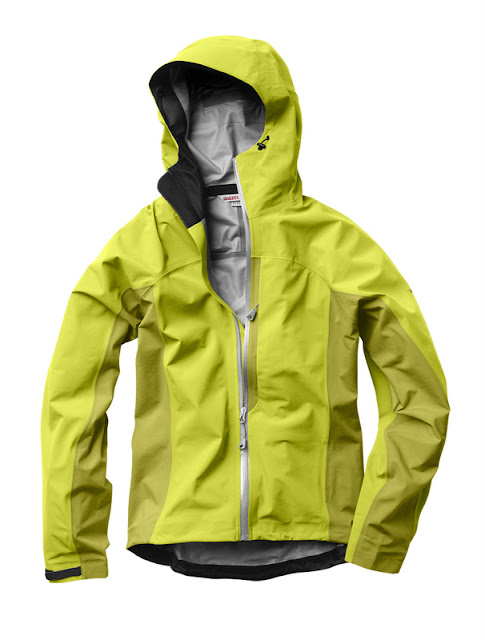 Below:  Dane leading in his Westcomb, Shift LT. 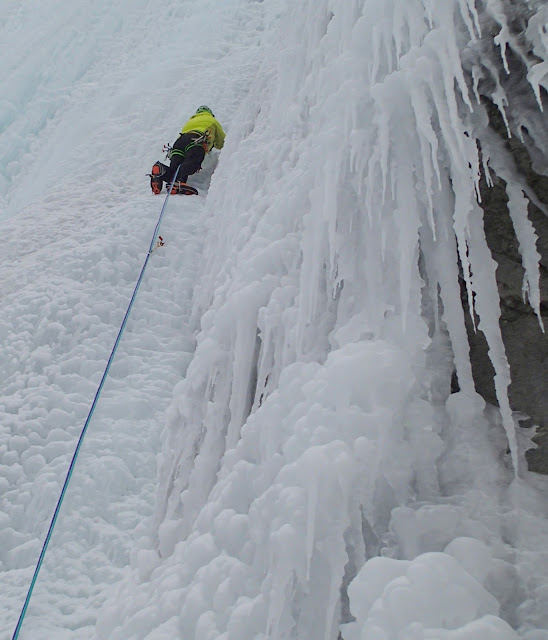 
Although I have likely climbed more ice in a hard shell than any other piece of clothing, today a hard shell is one of my least favorite garments to use.  More likely one I would use skiing these days, so I can dress down for a good work out and still cut the wind chill.

But if you are going to climb in a hard shell the newest Gore and Polartec "hard shell" technologies are actually pretty spectacular.  There is a light weight Epic shell that will be here soon that will make a good comparison to these two.  That should be interesting.

Before I offer some comparisons on these two how about some back ground?  BITD (as in back in the day)  belay jackets were rather unheard of. We had big jackets but few of the guys I climbed with ever bother to bring one.  We dressed in the morning with what we thought we might need for warmth that day.  May be a extra layer to go under our shell (likely a pile jacket or down vest) but not likely one to go over it.   Basically you assumed you would suffer, too hot when you were working hard and too cold when stuck while belaying a slow lead.  You learned to climb fast for all the obvious reasons.

No one climbing ice seriously back then would ever tolerate a gumbie getting on and then lacing up an ice climb like it was a rock climb in the sun.  That same thing is so common now.  Couple of reasons for the lack of empathy back then.  Few ever carried more than a 10 or so ice screws.  Screws were just too hard to place even in the best of conditions.  The other was you simply didn't get on climbs you weren't technically capable of.  Experience taught you and your partner that.  Falling on ice was simply unacceptable.  You ran out ice climbs, just to keep everything moving and everyone warm.  I've had several painful reminders of how not to ice climb, when Dave can't come out to play.

When you are climbing within your skill level you can move quickly and carry little gear all while staying warmer.

The first one day ascents of GCC on Kitchener, the Super Coulior on Deltaform, Slipstream, Teardrop and Polar Circus were all done in a similar manner.  Hard shells, no extra clothing. tiny packs and climbers performing well within their skill levels.

No surprise the skill levels have changed.  The technical difficulty at which the current generation of climbers are capable of is simply amazing within that perspective.  Their ability to get above their own pro...not so much.

It should be no surprise then if you want to climb light and fast a hard shell built to exacting standards and lacking many of the modern accouterments some require is still a good choice for most conditions where ice is involved.

When Dave and I kitted up on the Parkway last week, we were both in soft shell pants, a moderate amount of base layers, little insulation and hard shell jackets.  I used the Shift LT, Westcomb's new light weight (the LT), sewn from two types of Polartec's Neoshell.   Dave showed up in the Arcteryx, Alpha FL (fast and light) , using two weights of Goretex Active shell.   The jackets are very, very similar in design and function.  Which made for some easy comparisons.

What does all that mean to you?   Either is a nice "action suit" jacket but not much really in actual differences.  More differences in the pattern cut imo than performance.  But no question, there are differences in performance.  Lets talk pattern first.  The "FL" designation from Arcteryx stands for "fast and light".  Fair enough, the jacket deserves that kind of label.  Not sure or care who got there first but the Westcomb Shift LT is equally "fast and light".  Jackets might as well be clones of one another.  Same single chest pocket and helmet capable hood.  Great fit on both hoods with a helmet.  I find the Westcomb pattern fits me in a large better than the Arcteryx stuff generally does in a Large.  The Westcomb stuff is cut a little bigger in the shoulders and arms.  I am thankful for the better Westcomb patterns (for my body shape anyway) as most every new shell my size I try on these days seems to have arms the size of a #2 pencil.   I'm 190# and 6'1".  That forces me to get the next size up in a lot of clothing.    But Dave (who is almost skinny) at 185# and 6'3" loves the fit of a size large Alpha FL.   Both have long tails that stay tucked into a harness.  The sleeves are long even when you are full stretched out and seal well under or over gloves.  Perfect!  We can easily move along from all that now.  Find the one jacket that fits you the best, would be my suggestion.

Performance of the shell fabrics?

Goretex has an enviable reputation of cutting the wind and keeping you dry.  The Alpha FL does both.  The Shift is currently the lightest Neoshell garment yet made.  And IMO it shows.  Awesome jacket for sure and I love climbing in mine.   You will stay dry from the inside or the outside.   The newest Neoshell material, like the newest Goretex stretches a bit.  But while I think the Neoshell breaths better under a heavy work load I also think the Goretex is more wind proof.

We were climbing in the minus mid teens Celsius.  I've recently learned that jackets that are less than 100% wind proof are chilly.  My Shift was perfect for leading.  But I wanted to quickly get on my belay jacket (which is wind proof ) when I wasn't leading.  With the same base layers and very similar insulation under our shells,  Dave wore  a belay jacket once in several days of climbing.  I wore mine at every belay, every day we were out, if there was any sort of wind.  Some of that can be tossed to my "new" body reacting poorly to the cold these days.  But not all of it.

So what did I really think?  I like the bright yellows and green color combos on both jackets.  When I was cold in the wind, rightfully or not,  I liked (envied) the Goretex version.  When I was pumped stupid and sweating bullets I preferred the Neoshell.   I sure dried out fast!  Truth is it all boils down to fit for me.  The Westcomb fit me very well in a large.  The Arcteryx didn't in a large (too small or a XL. too big).    That is a pretty common issue for me..similar thing happens with some of the Patagonia clothing.

Both fabrics are really really good for what we were using them for, which was ice climbing.  May be even better for skiing and snow boarding is my thought.

Figure out what you need for clothing and what will fit into your own system.  Then find the garment that has a pattern that fits you the best with those same qualities and features.  Honestly?  It is pretty hard to go wrong with so many really good choices.   If you screw it up first time around you'll are just as likely to learn how to climb faster or suffer more.  How bad can it really get :) 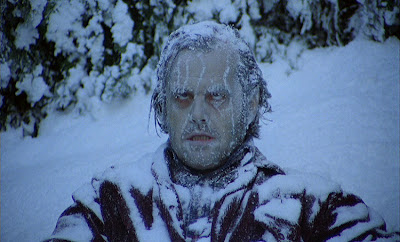 Not sure if you're planning on going to the winter OR show, but if you do, can you please check these out?

Will do Kevin, thanks. Appointment already scheduled. What, no love for Dynafit? TLT6 is looking pretty good as well. Vertfest?

I've indulged myself and bought an Alpha FL some two months ago. I love it. Fit is excellent, my shoulders have more than enough room (I bought size large) to move, when I raise my hands above head level, the jacket stays below waist level and the hood is excellent. The jacket is crazy light and super small when packed into it's own stuff sack - exactly what I was looking for. As Dane said, it blocks the wind extremely well, you almost feel like being in a shelter. The squid ink color is very nice and the jacket was made in Canada :).

I would only question it's breathability - I hiked in it's twice to the top of the hill which sits literally in my back yard, a good 3600 feet of elevation gain. I wore only a t-shirt baselayer beneath and it was soaking wet, when I reached the summit. The inside of the sleeves was also running with sweat. Both of the times, the outside temperature was around 0°C. Could this be because the fit is a bit "baggy" with only a t-shirt underneath the Alpha, therefore the moisture transportation is very hard to achieve?

FL is a nice jacket and as you say very wind proof. Better than the Shift's Neoshell. Breathability by comparison is not as good as the Neoshell. I am pretty sure how tight you have fitted your jacket is not going to make a big difference on that. Dave's FL is very snug on him. Take a look in the Raptor review for a reference on his fit. My next comparison project is the Event version of this same jacket, the Westcomb Focus. We are cutting some fine lines these days with the fabrics being used.

Look forward to your reviews!

No vertfest for me, school has me locked down in spokane.

Saw that but my guess is no way that new black La Sportiva will be $600. My guess is more like $1500+ retail if La Sportiva's history mean anything.

I have a pair of Zero4 Carbons that I like for a "big" boot and the new Vulcan looks good as well. But haven't tried them. Been trying to go the DyNa direction instead.

Another player that belongs in your discussion is the Beta FL. Exact same materials as the Alpha FL except it has two alpine pockets (I like that for around town) and it is "athletic fit" instead of "trim fit" making it slightly roomier. The Atom LT layers perfectly under the Beta FL without compressing the loft, but the Beta FL is still trim enough if only a base layer is under it. Conversely the Atom fits well over the Beta during a stop or low activity. I'd be curious how an Atom LT layers under an Alpha LT when both garments are the same size. On paper it sounds like it would be very tight.

Beta FL + Atom LT has been my go-to combo this winter.