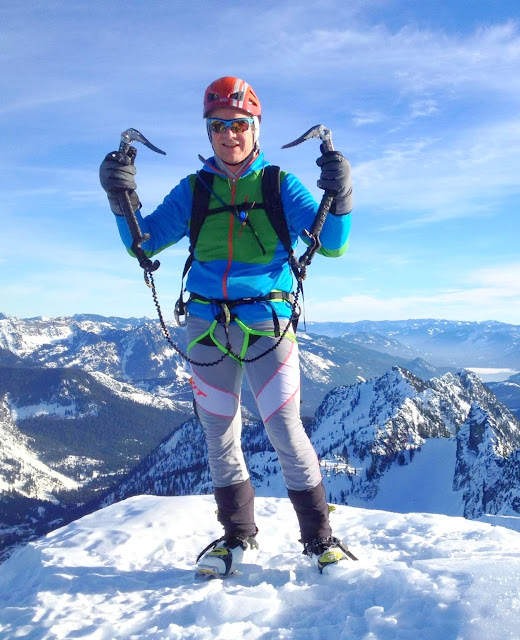 A Euro like conversion in the Cascades for winter use?  TLT Ski boots with crampons,  Dynafit ski-mo lycra tights and a bright '80s retro colored Patagonia  Piton Hoody.  The perfect combo for that day!


I've likely had more info requests about this sweater than any one piece of clothing recently.  As a reference this one will likely become just as popular at the Atom Lt imo.  It is that good.  Mind you I originally thought the Patagonia video was purely hype by paid actors.  It is not.  May be I shouldn't always be so cynical.  These guys are not kidding you in the video.  The Piton is everything they are saying it is..

I really like and almost always use the R1 Hoody.  Have since the first versions.  Part of me really accepting a garment is finding a place in my system of winter clothing where the garment easily fits in.  The Piton is so versatile it immediately fit in.  The Piton sat on my gear table in a bag for a few weeks before me actually trying it out.  Once I did it has now gone every where with me much to my surprise.  I wasn't expecting much to be honest.   The Piton will work well as a base layer.  It will work well as a moderate weather "shell" or a piece of insulation under a shell in colder conditions.  I have used it as all three at different times already.  And I really like this garment.   No problem taking this one out 12 months of the year.

Only down side I see is I wish it had two chest pockets and while they are there a hidden zippered fanny pocket would have been a great idea as well.  Just the 2nd chest pocket would add a lot to this one used as your outer garment.  A fanny pocket, done right, wouldn't be felt with a harness and would add some extra cross over advantages off route.  Done right you could easily use that fanny pocket with a harness for gels and bare essentials.  Even a lwt wind shell easy enough.

Remember that I only write about things I think are stand outs.  Which is the reason you see a post about the Piton and not the OR Radiant Hybrid Hoody.  My first impression of the Patagonia Piton was it was a expensive version of a sweater I already owned, the Radiant Hybrid Hoody.  In the black color my Piton sat unopened on my table for a few weeks.  Then since I didn't think I would ever use it I exchanged the black one for the blue and green color which would make better photos on the blog.  Glad I did.  I have used the OR Radiant Hybrid Hoody a lot over the last year.  First purchased along with 3 other hoodies to find a replacement for my now stinky R1s.  Out of that bunch of hoodies only the Radiant Hybrid still survives in my gear closet.  I use it for cold and wet weather running mostly with nothing under it.  So while good for running I found it pretty limited in my own use, compared to say the R1.

They could almost be made from the same pattern.  Pocket is reversed on the chest.   Neck zipper is off set on the OR and it has thumb cuffs.  But the material is slightly different. And the "vents",  wrist to waist on the OR don't seem as comfortable or as stretchy to me as the Patagonia does over all.  I like it but nothing I would have ever written about either.  I have been wearing the Radiant Hybrid Hoody all day just to see if my original impressions were still true.  They are. 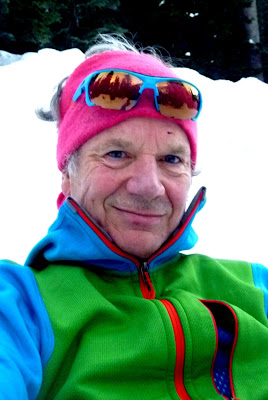 Among other things I prefer on the Piton is the fabric mix and the center zip which makes a usable collar on the Piton with the hood down.  A left and right chest pocket would have been better imo than just the one.  At least it is on the left side.  OR's Radiant version has it on the right hand pec......which is backwards for anyone right handed.


The hood is good over a helmet.  And you can get an idea from the picture of just how high the collar will come if the hood is left down.  One of the "big" features that really turned my head past the Radiant's off set zipper. 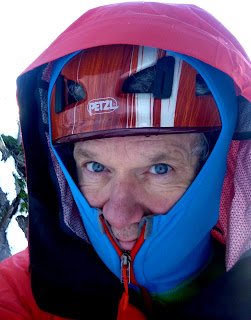 I was originally going to make a ripping comparison of the OR Radiant Hybrid Hoody to the Patagonia Piton.  Where the OR piece was to be the landslide winner and @ a better price point.  Imagine how surprised I was to NOT have "just another runner" in the Piton!  I have plenty of gear to run in but few bits of gear I really like to climb in.   Once I realized just how good this piece of clothing was for me and more importantly how easily I could incorporate it into my clothing system, I ordered a black one as well on line at a discounted $116. price.  I'll wear them both out eventually I suspect.

More like a softer, stretchier and more wind resistant Radiant Hybrid Hoody and a steeper price tag of course.

I've had a Radiant for over a year now. Haven't bothered with a review. Wasn't impressed even though I use it a lot. Likely imo the Piton is worth 2X the price or more. Which is why I wrote the review. But easy to find the Piton at $120 on line right now. I did last night and bought a second. Won't be buying another Radiant Hybrid Hoody even at $50.

Thought it might be worth mentioning here again (from the CCW and Dynafit post) I got the Piton for $124. @ o2gearshop.com Moosejaw has the woman's version for $116 right now. Rockcreek.com has them at $116.35 right now and a better color/size selection FWIW.

Thanks for the review. I was actually wondering what fleece you had on in the pas could of photos. I've actually been looking at buying an R1 but after seeing this, I think I may get more use out of the piton. I like the mix of fabrics. Seems to be a smart idea. How breathable is it compared to the R1?

Slightly less breathable than a R1 but a lot better in the wind and more versital as a base layer or a mid layer, and outer layer. The Piton has just replaced my R1s for the most part.

I simply can't come up with a more versital combo with a R1 in the mix. That too surprised me.

I purchased this as casual wear as i just like hooded sweatshirts.

Being the Piton has a full zip i still prefer my R1 Hoody as a mid layer. On a couple occasions i did rock climb in the Piton with just a base layer under it and it was perfect! After some washing the blue fabric does pile more than i would like. I would also like it with the thumb loops like the R1. Although i never climb with my thumbs through the thumb loops "circulation" thumb loops sure make getting dressed much more easy. I really wish my base layers also had thumb loops. Again not that i would ever use them once i had the clothing on it just makes sleeves not bunching while getting dressed so much more easy.

All and all this is a great outer layer imop that can also be used as a mid layer. Dane you are spot on with the year round piece of gear. Although i still like the 1/4 zip on the R1 for layering under a shell. After months i still have this piece and that says a lot as if i do not like something it gets returned sooner or later "BackCountry" ;)

Good feed back PJ, thanks. I'd like to have this one in a 1/2 zip as well. It would make a better base layer that way I think.

But have to admit I like how easy the full zip is to use as well.

Add the pockets (2nd chest and hidden back) to the full zip and I'd buy both.

Back zip for the bike i take it? I have used this on the road bike twice and it was also nearly perfect!

On the bike though i figure you always have your jersey pockets so no need for them in the coat also.

At least for me as i hope to never use the stuff in my pockets on a bike ride as it usually would be a tube and a co2 canister...

Not for the bike. Although that is where the idea came from originally I suspect. Ski-mo and endurance/trail running idea already in use else where. I have a couple of similar garments from Dynafit set up that way already. Gels and bars can go there, even with a harness on if done right.

I am not using this as a jacket/coat. More a cold weather jersy/sweater to climb, bc ski or trail run in with only a very thin base layer under it and while under a heavy work load.

I am enjoying your blog posts on all subjects, however would it be possible to cover some trouser options. there are so many top and boot posts I was wondering about what lies between for you. Or is everything just middling with nothing that stands out?

Thanks for pointing that out. I have left pants out of the conversation. My bad. I recently recieved a number of new pants that I am using now and obviously lots of old ones have been through the paces. Various models from Patagonia and all the alpine models from Arcteryx are my go to pants. Other favorites are from NW Alpine and Dynafit. I'll add a list today when I get time.

sunnysports.com has the piton hoody on sale just to add to the list, you can do a google shopping search and sort by low to high as well

Trying to figure out a jacket system for austral winter in the Andes this year. Thinking about a lightweight base layer, piton hybrid, BD access LT hybrid hoody, then big down jacket (not yet decided, maybe patagonia fitz roy jacket?). My thinking behind this system is having a mid layer for breathability, the LT for active insulation, and a big down layer for skiing or stops. I have had great results with the LT so far this winter.

Have fun down south!