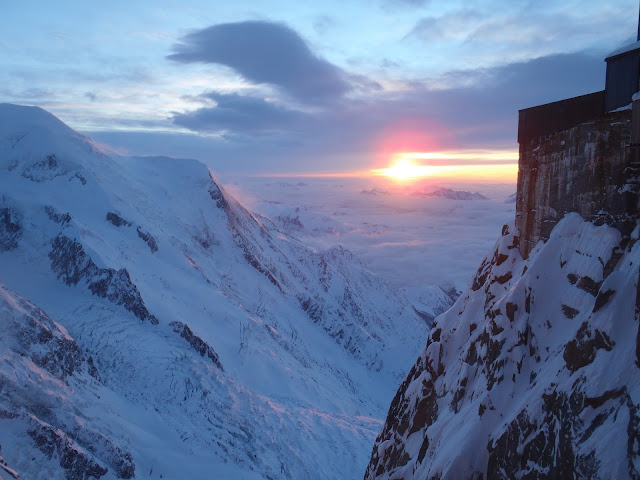 I have a few theories on gear that take time to prove one way or the other.

The same conversations I am having now remind me of the conversations from a few years back on leashless tools.   It is easier to climb leashless.  With a well designed leashless tool you'll climb harder, be able to wear less clothing, stay warmer and have more fun in any condition by comparison.  Took me just 3 days to be 100% convinced of that.  And years before it has become common knowledge in our community.

Skiing?  From the ongoing survey I get two distinct comments.  "More skiing" or "no skiing".  And surprisingly it is almost a 50/50 split.  Skiing is so much a part of my own alpinism and growth in the mountains and in the sport.  My apologies, but you'll continue to see skiing as a major topic of discussion at Cold Thistle.

So here is the long term ski project we've just started that I am very excited about.

I am convinced that modern, upright stance, AT boots are easier to ski in, easier to walk in and  and simply more fun to use.   I *think* it will be gear easier to learn on as well as long as a lift is involved to give you the time on snow going down hill.  And not wasting that time/energy earning your turns for the first season or two.   Took me longer than 3 days to come to that conclusion.  And I may yet be mistaken.  I know what the newest gear has done for my own skiing.  And my "ultimate" gear selection does not exist, yet.   But it gets closer every year.

BITD (early '80s) my partner and I have some of the earliest imported plastic, Vibram soled ski mountaineering boots.  They were most effective for the early predawn bomb runs while working patrol.  Not good enough imo for full on lift skiing.  But Larry used his to good effect most days and was a lot more comfortable in his boots going up and down a lift tower or stringing  fence than I was in my downhill boots.

My partner today and beta tester in this madness, hasn't skied in a few years.  And even she admits she was never much more than a beginner when she did ski regularly.

The plan is to start at one of the local NW ski areas with a season's full of lessons.  And then eventually ski off the Midi ( may be not this year and more my plan than hers ;)  all on the same gear we have here.

Obviously I had some influence on the gear choices.  But with literally any option available for ski/boots and bindings (including full blown downhill gear) I did not choose the gear.  She did.  And for the most part knowing full well the limitations of her choices.  How those choices pan out over time will be an interesting project to relate here on the blog.

Some other's thoughts on the same question.  Ours is NOT the popular opinion.

Boots defined much of what was chosen here.  Her thought was an easier to walk in boot the priority.  That choice had nothing to do with back country skiing.  Weird as that might sound when you start comparing prices.  Simply having a rubber sole and heavily rockered boot made her confidence soar.   Elevated confidence just by walking to and from the lift is a good start.  I can attest to the comfort and support a good AT can offer if fit well.  And just how well they can ski.

Her first choice was a TLT6 or TLT5 Mtn.  Having the chance to ski both both and knowing the extra support with so little drop in performance walking and hiking ability I suggested the One PX as a better option.  The One's up right stance stance in Dynafit bindings is better than some of the comparable boots from other brands.  And because of that the ONE is also one of my favorites for pushing fat skis while riding a lift.  The added long term durability of the One PX over the lwt TLT5/6 made the decision for this project much easier.  I might buy a new pair of boots every season or two with little thought to  the expense.  She won't.

So the boot choice defined the binding style.  She thought the added confidence of the boot soles and all day comfort  would more than made up for the public's  "fiddle factor" impression of a tech binding.  We'll see if that continues to be her impression as the snow falls and lessons begin.

Skis?   This was really the most difficult pick of all the gear once the boots were sorted.  Even the boots were a easy choice by fit and known performance once the style of boot was decided on.  But skis.....they are so much of the sport.  The ski's design will make a difference on every turn in every snow condition, each time she gets off a lift.    These are rockered tip and tail with a progressive flex.  Good mix of camber under foot and a 5 point side cut technology.  Mid fat at 98mm under foot.   Pretty much an ultra modern ski design I could live with as a quiver of one. 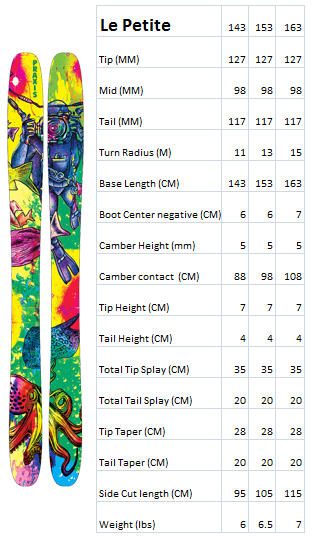 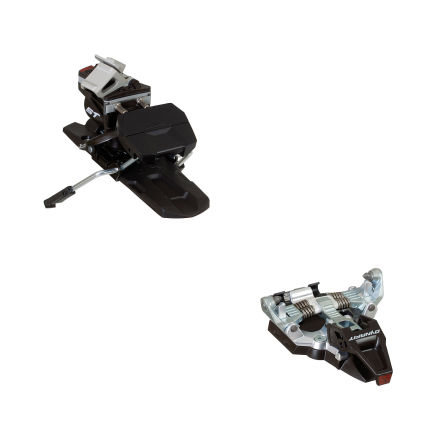 http://www.dynafit.com/en
Boot?  Dynafit woman's One PX
A solid performer on the lift and in the backcountry.
Helped that it is also one of my all time favorite boots. 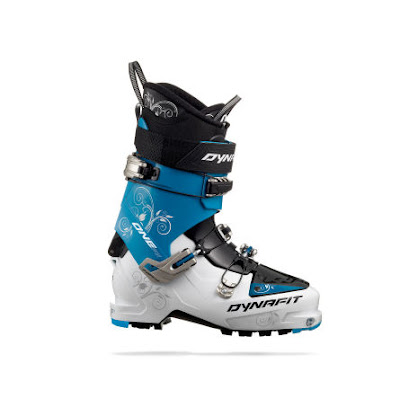 More to come.  All it takes now is some snow! 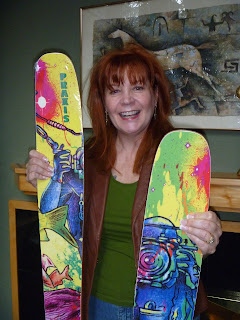 With all your great insight over the years, I think it's time for me to give back a little. =)

I've been scrambling and snowshoeing for two years and decided to add skiing to my repertoire. Because of snowshoeing, I knew that my goal at the end of the day would be to get to a point where I would be comfortable doing some AT skiing in the backcountry. With this in mind, I dove head first last winter and got a seasons pass at a local ski resort to learn and hone my technique before going into the backcountry.

Coming from a snowshoeing/scrambling background, I knew the benefits of travelling light and fast. Also, the fact that I had no ski equipment to start with and I was not tied to any specific system, it made more sense for me to start with AT gear rather than alpine gear. Over the coarse of 6 months, I went from an ultra-light setup using Garmont Masterlite, Plum Guide and Dynafit Manaslu to a slightly heavier but much more fun Dynafit TLT5 Mountain, Plum Guide, DPS Yvette 112 setup.

After 25 days on the hill last season, I went from a complete newbie to skiing just about all the black diamond runs at the resort. Looking back, I have no regrets whatsoever with diving head first in AT gear and learning on AT gear. Since everything was new anyways, I had no problems with getting use to using leashes instead of ski brakes on the Plums, and clicking into the AT bindings was surely a lot more quicker than strapping into snowshoes so it didn't feel like I was 'losing' much compared to starting with alpine gear.

One note on the user friendliness of using leashes instead of ski brakes and using dynafit style AT bindings is that, yes, it took sometime to get use to but it's really not rocket surgery to learn how to use. It's a matter of getting into the mindset that 'this is how things work'.

As for release, I've never had problems where I've fallen and not popped out. I did have some problems with a 11/12 Plum Guide on the Manaslu where I'd pop out for no reason but on my 12/13 model Plum Guides mounted on the DPS Yvette 112, I've never had any unexpected release or problems where the bindings failed release when I needed them. I've adjusted the DIN settings to my appropriate weight/height/ability and the 12/13 Plums have worked well with about 14 days at the resort in all sorts of conditions.

If I were to do it all over again, I would have gotten the DPS Yvette to start with (since I'm skiing a lot of soft dry snow in Banff) but there are days where I wish I had some more stable carving sticks. I might eventually get some Volkl Nanutaq or DPS Cassiars but for 85% of the skiing that I do, the DPS Yvette are awesome and super playful.

My only complaint about the DPS Yvette 112 and, by extension the Wailer 112 RP, is that at high speed, they tend to get a bit jittery but aside from that, they're quite pleasant to ski with and provides lots of float on powder.

The main reason I switched from the Masterlite to the TLT5 Mountain was due to some quality issues with the Masterlite where I had a buckle blow out.

The one weakness I found with the TLT5 mountain is that they can get pretty darn cold when it's -20C and below and I've since added some electric boot warmers which makes a huge difference.

As for going from the Manaslu to the Yvette 112. I find that the Manaslu doesn't hold as well when it's icy and it's quite a bit stiffer and less forgiving of a ski. The Yvette is just pure fun. The edges hold quite well for icy slopes, they carve amazingly on groomed trails and have tons of float on powder. Yes, I'd still prefer carving skis with better edge hold for icy day or spring conditions but overall, the Yvettes are amazing for most of the year in the Rockies.

Good stuff, thanks. I skied the 112RP (Yellow version of the Yvette) for most a season and found I like the 112RPC more. But both great skis. Boot warmers are a nice tip. The added bulk and warmth of a Intuition liner will help as well with any of the the TLT boots new or old.