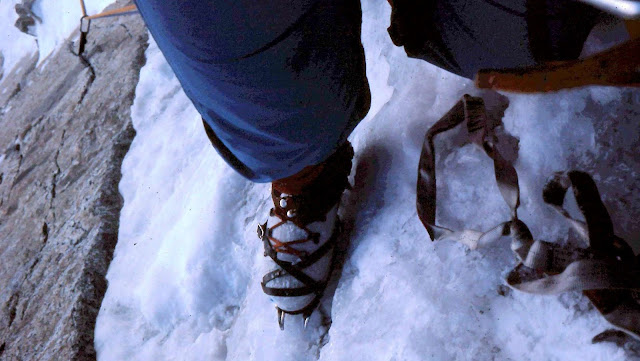 I was asked,
"What would you have done (differently), aside from creating a One/Mercury/Vulcan? (honestly curious)"
My answer if you are interested is below.   Add a comment if this is a boot you would like to see built.  'Cuz it would be so easy to do!
"Gotta realise where I am coming from. It aint skiing.

My priority was/is a technical winter/ice/mixed climbing boot I could ski in. The TLT5 was the best thing we (climbers) have seen in decades and the best ski boot that climbs well on technical ground any of us have ever seen.

No question the TLT6 skis better...it was a gimme. No real effort there to enhance the technology IMO, Dynafit is resting on their laurels.

TLT 6 and the CR liner in the American market is the perfect example.They want to get reimbursed on some of that technology now. Fair enough. No more hassles or listening to the US skiers bitch about cold feet and a bad fit (in too small of shells) all the while skiing a rando race boot with fat heavy skis while riding a lift. It hardly makes sense to me and I do it. Makes no sense to the Euros if you have played some in both places.

Kinda hard to blame them very much. But it aint what I WANTED so I'll bitch'n now

Even though I've bought three new pair of Dynafits before the season has even gotten started yet!

I have no interest in the Vulcan/Mercury. Although I ski in a ONE a good bit on lifts. Face it, ski boots are "easy". Lots of them. And lots of really good ones! Dynafit has just kept spinning the now OLD technology of the DyNA rando race boot into better and better down hill ski boots or offering a better price point. How hard is that!??. They all skin and walk well by comparison. But the bigger and heavier they get, they worse they climb in comparison to a real climbing boot. Even the original DyNA is better as a climbing/ski boot. Really a toss up between the MTN and the P version for a few reasons as to what boot was better in my world. So far for climbing the TLT5 has been the best overall of the entire group including DyNA/PDG/5 or 6 if I had to choose.

Dynafit has all the parts and the technology to build an incredible and very specific boot. The climbing community is small by comparison to the ski community world wide so I understand why they bailed on the project going forward as a "climbing" boot. Even the Rando community in Europe makes the alpine climbing community here look tiny. Here in NA we hardly have a Rando community yet. It is growing but there really isn't one by comparison.....there wouldn't be any rando gear we didn''t get in NA if there really was a rando community here. Now we only get a small percentage of what is available for gear in Europe. And all of it way too expensive simply because the market base is so small to absorb the investment in technology.

Good on Dynafit for pumping the price of a ski boot up to an "acceptable $1000". I laughed at that price first time I saw them at OR. Thought no way that boot will ever be a commercial success.  Scambled and HAD to have a have a pair within a year !

Dynafit built an over whelming commercial hit with the TLT5 based on the DyNA. But it took the new 6 to make it a real commercial success I'd bet.  Then Dynafit got by passed by /lambasted with the Alien 1 in the race world. And climbers took note...but a $1800 ski boot? A $1800 climbing boot? You got to be chiting me! That ain't ever going to be a real commercial success. The Stratos Cube? May be even better as a boot but how durable is it and @ a shocking $2500!  Of course I want a pair at -600g per boot in my 29.   I am not sure Dynafit ever understood the DyNA/TLT5 series product outside the Rando race world to be honest. Certainly doesn't seem so. But they are running with the design...all the way to the bank. Instead of pushing the technology into something newer yet...which was never a down hill ski boot really.  But it is now.  An expensive and fragile one at that by comparison.

Ski a Maestrale/ RS/Freedom or a One/Vulcan/Mercury side by side and you'll better understand that comment of "easy" to make a decent ski boot.

The "easy" climbing boot I would have already built given the chance is just a composite of what has been done and parts/materials easily available at Dynafit today.  I suspect it is the boot many already want...I know I do and would have given my eye teeth for one in the past working on skis or in the mtns.

this is what I want:

TLT 5 with the toe bellows bottom made of Pebax for more durability, upper cuff made of Fiber glass and another inch higher in the front of the cuff. (see the Alien 1 cuff)  I want more support there but no power strap. Stripped of all the faff. No power strap and no tongues. (of course everyone would bitch about that, massive roll of eyes here)  A decent seal on the boot so you stay dry. A metal on metal ankle hinge rivet. Better set of buckles than the 6 has and less complicated. Something between a ONE (but only two buckles) and the DyNA. I'd move that second buckle location to better seat the heel...ala One...may be in between the two positions each boot uses.   All of that could be done better but I pay cash of my boots so I'm not going to drill extra holes in them just to find out.

That is a boot you could climb Grade 6 ice and M5/6 mixed easy enough. Ski any where I am capable of skiing with a decent width ski and be as light or lighter than what most of us use for winter climbing now.   Lighter for sure than most any other ski boot, short of full on rando race gear. Best part? A reinforced Intuition style liner for skiing (to partially shut the US market up) and a Palau lwt liner for climbing.  Which is better for both IMO.  Buy one or both.   Both heat modable of course. Not required but I might work the rocker and toe some to better fit technical crampons.  La Sportiva went too far there.  No crampon fits their boots.  So ya gotta be careful.  Although the Grivel G20/22 work pretty dang good on the TLT5s as is. Every other crampon is rather ho-hum for fit.

I'd pay for that boot..in a heart beat.

For those that know the area..this is the boot you do the high traverse off first bin on the Grand Montet and ski over to the base of les Droites. Run up the Ginat with G20s snapped on the same boot. With Dynafit Nanga Parbat ski and tech race bindings strapped on your back. Hit the breche, and a few raps later skis on and down before the last train heads back into town. 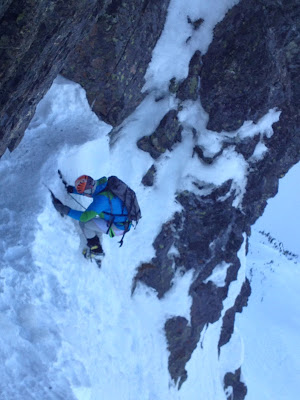 Likely a decent boot for control work @  Odark30 for the morning bomb run?  Lifty boot for warm feet  and to catch that quick run on the secret stash of pow?  Nice one for guiding long days in the back country.   Or a quick run up and down Rainier or Mt Blanc.  Call it simply a MOUNTAIN boot.
Posted by Poncho at 12:19 PM

+1 for a boot like what you described. Probably wont happen because right now boot companies are able to sell us ski boots and climbing boots. Why would they shoot themselves in the foot and make one boot to do it all.

Add to that a better RoM in the bellows (think hybrid TTS w/TLT heels locked as needed for dicey steep stuff) and bellows lock-off mechanism a-la Salewa Pro Gaiter (when the going gets steep), AND easily replaceable (and properly lugged) Vibram sole. I'd sacrifice a few grams for that, but the gain will be longevity and versatility, right?

They also need to offer pre-fitted supergaiter as an accessory for those needing more warmth.

BTW judging from pictures only, I like the Scarpa Alien ski/walk mechanism better, besides no hole is needed in my pants for it to work.

And no I'm not gonna buy current overpriced Dynafit offerings cause of cuff rivet and general durability issues.
--
M., .ua

Great ideas. Thanks. My thought was just do a monster boot with what Dynafit has in stock now, grilimid lower and all. Or I coudl just buy the current P (did that) and strip it or source the Euro Speed C-One TLT6 and strip that. I just sold my TLT5 P but kept the TLT5 mountain just to "have" this project boot. Wonder if they would sell me just the parts :) Not likely I suspect. Nice to dream, right?

To anon-
I've seen multiple broken Alien ski/walk aluminum bars at skimo events and only seen one faulty DyNA boot ski/walk buckle hole because a critical metal reinforcement piece around the hole that the buckle inserts in was missing (as seen on Andy Dorais' blog). Both are annoying to use without modified pants. THough I think the Alien is a great boot and would encourage its use, I'd give the nod to Dynafit for durability.