Dynafit ONE and TLT6 comparison? 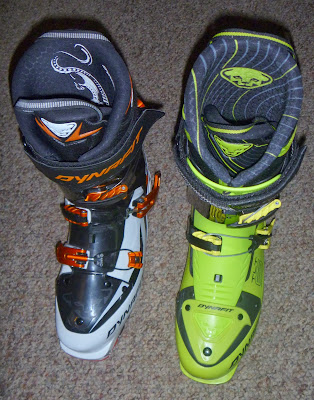 I do have some additional long term ski boot reviews in the pipeline but here is an interesting observation from this week that kinda surprised me.   Although I have both boots in the closet and have skied the ONE a bunch the thought never occurred to me to make a comparison.

Big Steve and Marshal over at TGR were the first I saw to bring up the likely comparison. Took me a week to have that AHA moment. One of the reasons TGR is a good place to hang.
A better comparison maybe? And a good place to start for a franken-boot project for those inclined and wanting to save some money?  Likely!

The ONE is a lot more real ski boot than the 5.5 ounce weight gain would appear to be over the TLT Mountain.

It has been gnawing at me for a week or so. I seem to remember Lou over at Wild Snow or one of his members "asking" for a TLT ONE at some point in the recent past. Without a doubt imo that is exactly want the TLT6 is now.

Not sure what the weight is of the third buckle @ the toe and the two added Pbax straps are for the ONE. The liners are off by one ounce. Add the spoiler, bigger power strap, added weight of the deeper tread and heavier lugs of the sole rubber and extra sole length of the ONE and the grams and then ounces add up quickly.

Performance wise I don't see a huge difference in either boot, except for skinning. There the advantage of a shorter sole/backed up tech fitting and more/easier ROM will help but also easier to go down a shell size in the ONE. (which Lou already thinks he can do in the TLT6)   And ROM can be added easily enough or loosened up any way.   I take a 29 TLT and use every bit of the length.  I easily wear/ski a 28 ONE. And save 3mm smaller BSL.   Guess I'll also need to look into a 28 TLT myself.  The tech fitting placement in the toe between th TLT and the ONE is the one of the few places I don't see a way to fudge the performance.

Sometimes it is easier to just ignore the obvious in front of your eyes. As I have clunked around in my TLT6s here at the house sorting out my liner fit I kept having the nagging feeling I was in just another ski boot. My most recent "ski boots" are the ONE and the RS. And now that feeling makes more sense to me. Taking a closer look at the TLT6 and the ONE side by side and looking down at either while they are on your feet and the resemblance is uncanny. Looks to me like Dynafit shot themselves in the foot here.

More details to come asap.  But anyone doubt how easy it would be to chop 200+ grams off a ONE or Mercury shell and get under the factory TLT6 shell weight and equal or better the skiing of a TLT6?

Thanks for the quality AT boot commentary. My TLT-5Ps are near shot, and while I sent them off to get the rivets re-pressed one more time, I'm not sure they'd make it through a fourth season.

I originally thought that TLT-6Ps would be the obvious solution, but I'm somewhat skeptical of the cuff rivet "fix", and your thoughts leave me feeling that Dynafit tried too hard to make this boot a quiver of one... the overlap with other boots in their range is simply too great.

With that said, I'm trying to figure out the best approach for a two boot quiver with minimal overlap of purpose (but that won't leave a hole in the middle). My current thought is a Titan UL for slack country (beefy, DIN sole option) and a pair of Alien 1.0s for skimo and long tours. It'll kill the bank account, but seems like the Aliens might give me longer service than the TLT-5s given the beefier rivet (and reduced use by having a dedicated in-area boot to take abuse). Thoughts?

Hi Andy, Looks like you are where I was a couple of months ago. No easy answer as you'd suspect I bet.

Alien...amazing boot no doubt.
Titan is as well.

I was really tempted by the Scarpa Freedom this year and a down hill binding on some of my boards. But just could not bring myself to go back to a heavier boot and binding combo.

I have the RS and a One and am happy with both and will likey ditch one or the other eventually. Dynafit walks so well...it is not an easy choice. That is my lift boot choice. Just not sure which. Making a franken boot from a Mercury is also tempting. Resigned myself to a tech binding though, in the bc and on the lift.

Also thought of the Alien 1 but it is so much money. I went PDG for fast/lwt and saved a TLT5 for climbing. Then decided I would make the newest TLT6 a dedicated lwt SKI boot and climb in them if I have too. But for me anyway it is a ski boot primarily.

Even with the Alien 1 I'd want the TLT6 so I cheaped out and did both Dynafit boots for the BC and Slack country. Still unsure what I will use on my long boards but likely one of what I already have instead of a combo boot that doesn't do anything as well as I would really like.

For me it has turned into a 3 boot world.

I'd like to have a Alien 1, the TLT6p and the Scarpa Freedom. But that aint happening till I win the lottery.

Good luck. Let me know how your choices turn out.

So my TLT-5Ps came back from Salewa NA with totally new lower shells after I sent them out for a cuff rivet repress... guess they had some spares around in 26.5. +100 for customer service! The only thing that now needs replacement is perhaps the original liners, as they're pretty packed out. You have any thoughts on after-market liner choices? I never disliked the originals, they were light and worked pretty well for me, but I'd be open to an Intuition or Palau drop in; just not sure what will work best.

That is very cool! Congrads :) Liners? I'd frist try rebaking yours. Foam will blow up again in the over and good for a season or two yet I suspect. Cheap fix would be a pair of the factory EVO/PDG liners. Same basic liner just a tiny bit shorter but they will work. Worth looking at a pair anyway. New CR liner is a nice option as well...both drop in.

Care to provide additional thoughts on this discussion? I think you said more details will follow...

I've got some older 4 buckle garmonts that are heavy (4.25lbs each). They fit like a glove and were a steal at $300 but with the weight and with the ski/walk switch and 4 buckles+power strap I'm always kind of screwing around spending more time than I'd like at transitions..I'd love to drop a bit of weight and get faster at the transitions, better ROM on the skin..

But I also got a ONE in yesterday in 26.5 and it seems like such a beefier boot. albeit I'm comparo a 26.5 and a 27, but the ONE is just a bigger boot--seems significantly wider looking at it from the back-cuff view, as well as on either side of the foot, its just wider. With flat feet that are somewhat wide, out of the box the 26.5 ONE feels better than the 27 TLT6P, go figure.

I don't quite have the financial liberty as yourself and some others with the toys--certainly I can swing the TLT6's but damn thats a hard sell for me esp if they will be lucky to last a few season. Sure the weight is great but a grand just whips me. I could get the ONE and a new pair of binders.. spose there is also the Mountain version when it comes avail in the area. Part of me doesn't want to be dropping such a huge chunk of change for an incremental weight gain.

anyways I climb and ski and just can't afford two sets of boots, whats your take on the nitty gritty between climbing in the ONE vs the TLT6? We really talking the 4-5.5oz or anything else significant? the slightly larger bulk I suppose.

well, thanks for entertaining my musings.. cheers to the blog, I enjoy it

For the money the One is a much better deal. I really like the One for skiing and some hiking- skinning. Priority skiing? Gte the One. Priority skinning get the TLT Mtn.

Hey Dane, Really nice reviews and still an awesome blog and getting better all the time...

Quick question if you dont mind. How does the fit of the vulcan compare to the TLT6? I have been unable to try on the TLT6 but a 29 vulcan fits great. Do you know? Also, how big is the stiffness difference between the TLT6 mountain and performance? Thanks for any beta you can provide!

Vulcan/One and Mercury I fit by dropping a full shell size for a TLT 6P fit. But i don't want to tour in any of them far because of it either. For my tlt6 I use a 29 shell. The Vulcan Mercury/One I use a 28 shell. I were a 11.5 street shoe and have a narrow heel, moderate forfoot width. Difference between a 6 Perf and a 6 Mtn is pretty drastic imo. Boh ski well. But the Mtn is obviously softer and more progressive than the Perf. Fit wise the TLT6 is slight more narrow (mm or so iirc) on the last than the Vulcan line. Goggle search will find the specs for you on last width.