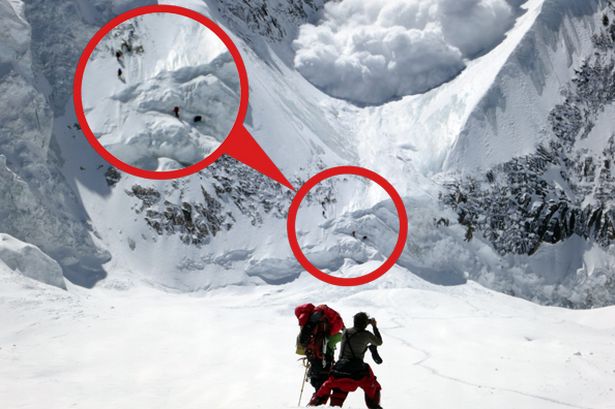 Photo courtesy of  Tunc Findik and the Mirror
A couple of years ago on our first day of the season in Chamonix two buddies and I took the tram up to the top of the Grand  Montets for some fresh air, to stretch our legs from the travel and to get a feel for the place.

Like ANY mountain environment it is a BIG place!

A few minutes later both of my friends were swept away in an slab avalanche.   They took a 1/3 of a mile  ride and both were totally buried at some point.  Thankfully both survived with only minor physical injuries.  Mentally I hope that neither will ever be the same.  I hope that experience haunts them both forever.  Hopefully they will always be more considerate of the terrain and snow conditions now.  Then worry about what they want to be doing.

That isn't my only nightmare about snow.  I intentionally try to remember them all every time I go into the mountains again.  And the friends that are no longer around for a simple mistake.

Every year several people die in avalanches very close to where I live.  It is a maritime snow pack here.  Lots of snow here and rapidly changing conditions.  But not all that different really from any other mountains I have lived in.  The Rockies or Selkirks are not all that much different.  Most of the year they are our play grounds.  Part of the year they are death traps.

Knowing the difference is like playing ball at the school yard or playing ball in the middle of a busy freeway.  Sounds just like alpine climbing doesn't it?  Two people died over the weekend within miles of my house.  Others were injured.  I drove an extra hour to spent the weekend skiing in the relative comfort of a ski area and several thousand feet higher in elevation.  Skiing in what was likely the last big winter storm cycle of the year.  Even inside a controlled and skier packed ski area the conditions were rapidly changing and iffy IMO on certain aspects at different times during the day.  Pays to notice such things.  No one owes you a freebie...even the ski area or their Ski Patrol.

Early in that storm we were skiing 2 feet or more of lwt powder laid on a rain layer that had frozen solid prior to the newest snow fall.  Imagine that potential on even moderate slopes.  The lower you went on the mountain, the higher the moisture in the new snow pack.  And the higher a chance of a dangerious slide.  The elevation where I got on the lift became a death  zone with a bigger dump of snow in such a short time.  The higher you got, the less problematic the conditions were...that day...where i was.  And that was just a few air miles away from the fatal slides.

Miles Smart, an American Alpine guide living in Chamonix posted this on Facebook today with a good photo selection, "One of today's many avalanches. It was a good day to have a beer in the sun wearing flip flops."

You don't have to be a UIAGM mountain guide to know when it is best to stay out of the mountains or find a better place to enjoy them.   Being in a developed American ski area doesn't eliminate all risk.  Nothing does.  And it isn't wilderness.  But better to be around people for a day in the snow than found buried in it.

Trust no one.  Make your own decisions.  In the case of snow conditions?  Always error on the side of caution.  It is only luck that gives you "overs" in an avalanche. 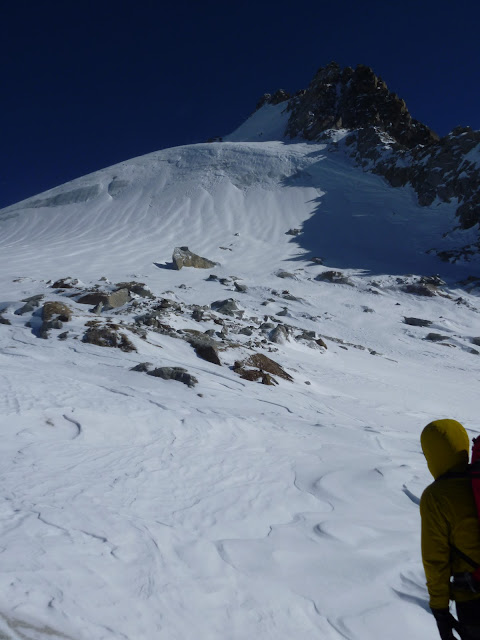 Kinda looks like a giant head stone doesn't it?
Three Nomics are buried there now.  Luckily no Americans ..this time.