A short history on rockered skis? 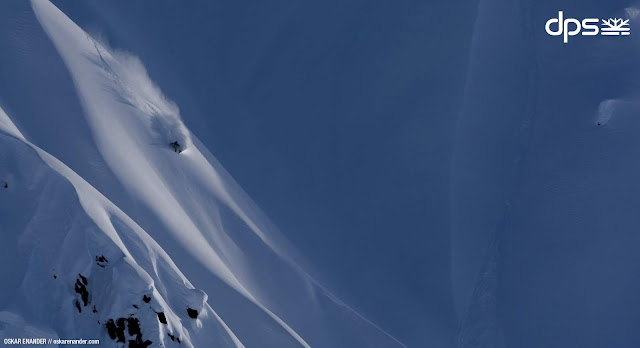 This is a cut and paste from the DPS web site.

I've included some of their time line here because it mirrors my own thoughts in a similar time line.  It is not an endorsement of DPS skis.  I'll do that myself much more clearly in the upcoming ski reviews along with other manufacturer's skis.  I don't think anyone can deny Stephen Drake's/DPS's involvement in the current crop of state of the art skis.

Back in the mid '80s there were European back country skis that were wider than normal...up to 80 and 85mm under foot.  The Rossignol Alps 3000s was an example.  They had  much bigger tip curves to help get the tips out of the snow and on plane quicker.  Typically skied in a 180cm or a 190cm.  Short when a 200 or 205cm ski was more typical for the adult male.  The short and fat, Alps 3000 was a common ski for Canadian Heli Guides at the time.

DPS founder, Stephan Drake, is spending his second season in Las Leñas, Argentina. He is on Rossignol Viper skis, 60-something mm underfoot. After a 1-meter storm, he makes his 100th over-the-head face shot turn down Eduardos. He collapses in a pile of exhausted sweat at the bottom. His pro snowboarder roommate ollies over him at 50 mph and slashes a huge wave feature at the bottom couloir exit. Stephan (and Dane) wants freedom from the fall line, and ponders quitting skiing and taking up snowboarding.

Drake buys a dusty pair of Atomic Powder Pluses sitting unused in the backroom of a Colorado ski shop. 115mm underfoot and surfable, he takes them down to Las Leñas the following season. There will be no more thoughts of snowboarding from this point on.

Drake lands a cliff in the Aspen backcountry, and bends the tips of his heavy metal Powder Pluses into a Rockered shape. Initially he is bummed. After skiing them further, the skis take on a whole new life; they ski more dead, but are surprisingly more surfable. The fall line opens up.

Drake builds a collection of Rossignol Axioms and Atomic Powder Pluses. He custom paints their topsheets.

Drake is riding hard with Volkl Snowboarder and former Swiss ski team member, Cyrille Boinay in Las Leñas. Drake's skis are now 110mm underfoot, custom-painted, custom rockered Rossignol Axioms with a build date of 1993. The two chairlift rides and late nights are spent discussing how the lifestyle of storm-chasing powder junkies, and this new dynamic way of surfing powder on skis isn't being represented by manufactures or media. At Las Leñas' Atenas wine bar they conceive a new ski brand that will reflect the culture and a revolutionary ski technology—carbon fiber. Drake is tired of trekking around the backcountry and wrestling skis that weigh 14lbs/pair. He wants light, ultra-high performance versions of the double metal laminate clunkers he is skiing on. Surfing and snowboarding have it right; light equipment is best for both energy conservation and high-performance riding; carbon is the ingredient to make it happen in skis.

DrakeBoinay, Ltd. is formed (DB Skis). A four-ski quiver is designed. A U.S. based manufacturing partner is secured. The flagship shape is the Tabla Rasa- the first 120mm underfoot pintailed, and rockered ski ever made - 30cm's of Rocker go into the design and design notes, but DB's manufacturing partner can't quite build it. It still skis great with its long nose and setback stance. In the Tabla Rasa's product and design descriptions, the benefits of "Rocker" are touted. Rocker officially enters skiing's vocabulary.

Drake and Peter Turner meet in Utah. A partnership is born. Instantly they launch into discussions of flex patterns and laminate structures. The fire is rekindled for the perfect carbon fiber ski. Turner infamously tells Drake, "it will be no problem for us to build these carbon skis elsewhere." DPS is born, the vision to create the perfect ski using spaceage material continues, and the duo begin designing an entirely new five-shape quiver of skis, including the iconic and groundbreaking Lotus 138 and Lotus 120. The Lotus 138 morphs the Tabla Rasa and Spatula concepts into the first Rockered ski with sidecut: a design that is copied by another brand within 1.5 years. The Lotus 120 shape becomes the template for the iconic 120mm pintail design: a shape that practically every major and small manufacturer now produces.

The move is made to switch back to plastic sidewalls. Another start-up issue forces yet another radical move in production engineering. Through the process, a huge breakthrough is made that gives long-term viability to the pure carbon ski concept. Now, pure carbon fiber skis can be made with the consistency and regularity of conventional fiberglass skis. All cosmetic durability issues are nailed. The warranty rate on a high-end carbon skis drops below 1 percent. The future of high-end carbon skis is secured.

The groundbreaking Wailer 112RP is introduced alongside a new Women's line. DPS relocates its HQ to SLC—under the shadows and deep snow of the Wasatch.

Editors note:
Bottom line?  What we can do so easily now on some of the most advanced ski designs, you simply couldn't do prior without using a snow board.