Many of the current generation of climbers may not know the name.  But you should!  Ed Cooper was climbing things years ago that many of us still aspire to today.  He was likely there first either taking pictures or climbing some thing that most have not seen in North America yet unless you have gotten off the beaten track.   From Denali and El Cap in the 50s to the "black hole" on the other side of the Canadian Icefields in the '60s.    I am honored to present Ed's comments and photos of Deltaform here on the blog.  What a treasure, enjoy! 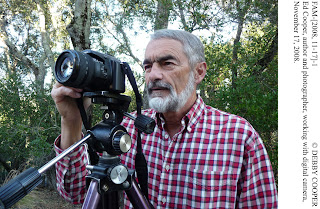 Interview with Ed here:
http://www.7photographyquestions.com/2009/01/p35-show-notes-for-mountain-photography----an-interview-with.html
His website is here:
http://www.edcooper.com/mountains1.html
Make sure you dbl click on the wonderful photos! 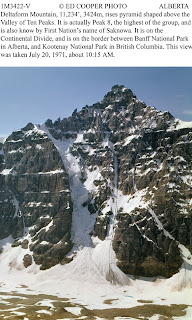 Ed's comments,
"I wouldn't describe Deltaform Mountain as an especially beautiful or aesthetic peak, but it is certainly an awesome mountain with a raw savage feel to it. It makes a great photographic study. Attached are several views of it, some with nearby peaks.They were all taken with a 4x5 view camera except for the view from the top of Mt. Lefroy, which was taken with a 2 ¼ x2 ¼ square folding camera. Low-res images are
included here, but the original scans are close to 300 megabytes each, enough to blow the images up to 30x40 inches and still maintain 300 dpi. Considerable restorative work was required on all the images, as over time the colors had faded, and fungal spots had appeared on the film emulsion." 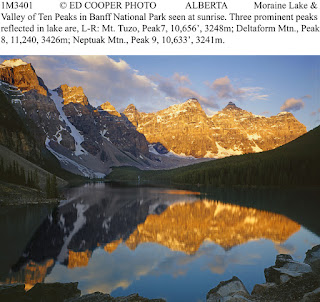 "The north face has made my anti-bucket list; that is, I've added it to places I would rather not be. I have recalled two interesting anecdotes about this area." 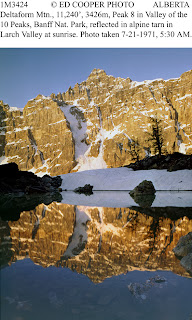 "About the time the images taken in 1971, there was a fatal accident in the couloirs between Peaks 2 & 3 of the Valley of Ten Peaks. A climber was killed by a falling rock careening down the couloirs while he was ascending toward the Neil Cogan Hut located between Peaks 2 & 3. Sometime later, I happened to run across a climber that I knew, and he was very surprised to see me. He said, "I thought you were killed in the Valley of Ten Peaks area". It turns out that the climber that was killed had the last name of Cooper." 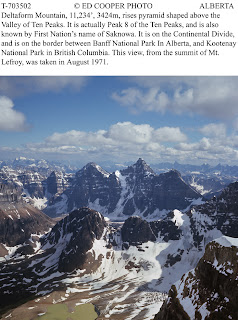 "The photo taken from the top of Mt. Lefroy has an interesting history behind it. It was the only time in my life that I have had a powerful premonition about a climb. This was a period in my life where I was exploring my inner self, with periods of intense meditation.    In August of 1971, I met up with and joined a group of 5 other climbers to climb Mt. Lefroy.

We approached the Abbot Pass Hut via the "Death Trap". The next morning we headed out and traversed out below Mt. Lefroy, The unofficial leader of the group pointed up a snow slope that led directly to the summit with no interruption by rocks. He indicated that that was the route.

One look at it and I had an immediate foreboding and knew that I couldn't go that way. I expressed my feeling to the group, and one of them agreed to go with me up another route, close to rocks, to the right of the other climbers.

As we proceeded upward, we noticed snow conditions deteriorating rapidly due to the warm sun. Snow was starting to slough off and slide. We stayed as close to the rocks as possible and actually climbed on them where feasible. It was during this time that we heard some commotion and shouts off to our left, where the other climbers were. Once we had reached a perch where we could look to the left, we saw the other
four climbers near the base of the climb. It was obvious they had been caught in an avalanche.

There was nothing we could do at this point, as it was too dangerous to descend even the route we were ascending. At least two of the climbers were moving around, so we knew that they, at least, would be able to get back to the hut at Abbot Pass and call for help.

To make a long story short, we reached the summit (where I took the picture) and then proceeded eastward over unknown terrain to find our way down. We weren't prepared to follow a new route, and we wound up traversing many ledges below cliff faces in an attempt to get back to the hut. We had to rappel a few times. At some point we were aware of helicopter noise, which came in to rescue the most severely injured of the climbers.

We arrived back at the hut just as darkness was closing in, thankful that we had chosen a different route!" 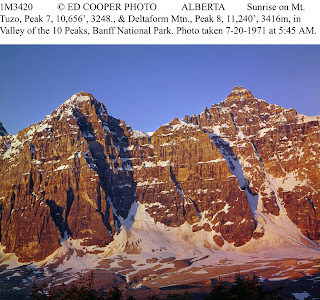 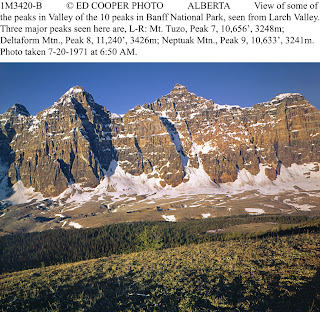 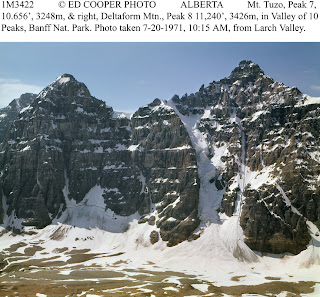 The Ed Copper photos are great...I like the way he highlights the mountains in such a direct way. Thanks for that link.

As a follow up to some comments I left in one of your older posts (I think it was in "The last of the old Nomics") I sewed up the ripped Mountain Hardware Pistolero gloves that I recently bought, and used them climbing. They are really nice, and warmer than I expected. As a side note, I did write to Mountain Hardware about the ripped gloves. I explained that, because I was in Europe, warranty would probably be too much trouble. I wasn't looking for anything from them; I just wanted to let them know that the gloves ripped the first time I pulled them on! They said that I could repair the gloves myself, and return them when I got back to the US. I thought that was pretty generous. Cool!