A quick fix for the "new" Nomic or Ergo pommels..

Petzl is now offering to fix any new tool under warrenty.  Petzl's is adding a pin through the pommel which is a much better solution than epoxy imo.  Petzl was quick to respond and offer a fix and a replacement.  They are a good company to support.

This is not an authorised Petzl solution for beefing up the pommels on the new Nomic and Ergo but it is the best I can come up with and not alter the handles.

Alter the actual tool handle and you void the warranty.  Which you don't want to do!

The issue is that the pommels themselves are stripping out the adjustment  system and wrecking the handles.
Pommels are easy to modify and inexpensive to replace.   Petzl should love what I am about to suggest as it will protect both your investment and Petzl's at least in the short term.

Couple of cautions first from my own experience.  Make sure of the size you want the grip set at.  Doing what I will suggest makes them bolted and glued into place at only one size.  You could buy extra pommels when they become available through Petzl and do the same thing but with a different hand size setting if required.  And have another size grip, bigger or smaller or all three.  Just takes a extra pair of pommels for each grip size you'll require.

That surprised me as the new tools have slightly different settings from the original Nomics.  A bit smaller and a bit bigger in the same settings it seems.

OK, the short term fix?  I used an industrial strength steel epoxy to fill in the bottom of the slot in the pommel.  But first and the most important,  if you want to maintain the warranty,  is be sure to use an epoxy that can be used with a release agent.  I used Steel Bed from Brownell's.  (http://www.brownell's.com/)   A number of similar products out there but that is one I am very familiar with.  It will certainly reinforce the pommels...but no idea if it will keep them in one place long term.  Seriously...I doubt it.   Knowing the abuse these tools take it is not the best answer but an easy fix, short term..  But not a lot of options at the moment either.
Back to the fix I used.

Be sure to give the end of the shaft a liberal layer of release agent and cover everything including the nooks and crannies.  Then add just enough epoxy (a layer 3 or 4 mm thick in the bottom of the pommel cut  should do) of your choice to have it pushed out the end of the pommel on either side when you bolt your pommels back on.  It won't take much so don't over do it here.   Make sure the pommels are in the correct position that you choose before starting.  Make sure both tools are the same position!  Wipe off the excess that was pressed out when you slide and then bolted the pommel down.    Let the parts dry the suggested 24 or 36 hrs.  The longer the cure time usually the stronger the resin-epoxy bond's strength.

I'm off for 5 days of ice climbing in the morning so we'll see just how long the "fix" lasts.


Factory shaft with umbilical attachment hole pre drilled and beveled by Pertzl.  Nicely done.  And the three obvious pommel adjustment notches that are failing on the right hand side of the shaft. 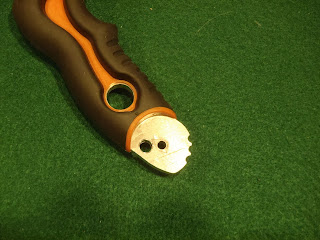 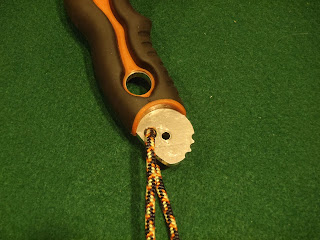 Cord and pommel in place at the medium setting..but not bolted down yet.  It had better be right when you put this all together  because you won't be moving it again other than to replace it after you have added the epoxy bedding material. 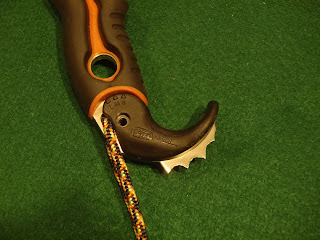 Easy to see here the tiny bit of pommel I ground off to fit an umbilical clip cord if that is something you want to do while you are working on the shaft.   The new pommels are an easily replaceable part and inexpensive. 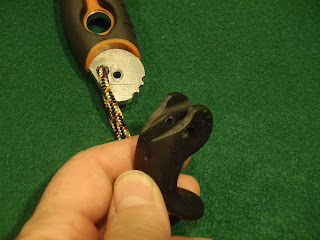 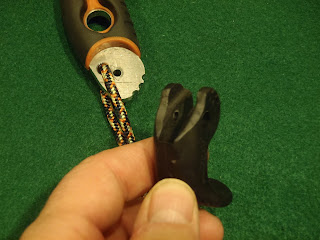 In the pictures below I am holding the pommel so you can look down into the shaft's slot and see the single steel engagement tooth.  I laid a thick layer of Steel Bed Epoxy into that slot which covered the single steel "tooth."  Putting your chosen bedding compound-epoxy here will help prevent the shaft end of the tool from being stripped out by excess movement of the pommel in hard use.  The idea is to reinforce the steel notch pin in the pommel by adding some support with the steel based epoxy in the other adjustment slots. 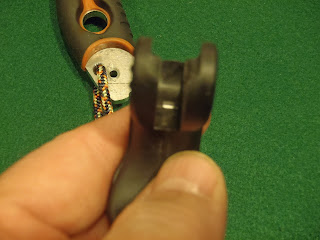 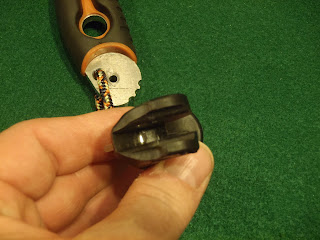 If you want to run umbilicals Petzl has made that easy now by the hole in the shaft able to take 4mm or 5mm cord.  Easy to grind off the back end of the pommels and thankfully not change the feel on the grip.  4 or 5mm cord will generally be about the same strength as the commercial umbilicals like Grivel's and BD's.
Posted by Dane at 8:37 PM

Petzl has announced a recall : http://www.petzl.com/en/outdoor/news/products-news-0/2010/12/21/information-griprest-nomic-ergo

Petzl's fix is to run an additional pin through the handle and lock of the pommel physically. It is a better fix than what I suggested with epoxy.